I'm certain I've found this one a few times. The main character is a female undead gunslinger. I forget whether she explicitly goes through situations where she would have died, or it's in her backstory, but I want to say that she's got some sort of facial injury or marking related to her undeath. I want to say that someone tried to hang her? She's in the pursuit of a mad scientist. I think it's eventually (or maybe initially) revealed that they were once lovers, and that she might have worked for him. I think he's trying to locate some secret of immortality. Other than that, my memories are sparse. I remember one episode involved her addressing a train robbery where the focus of the robbery is what seems to be a telescope. Later, said "telescope" shows up in a later episode involving a crystal city and something powerful buried below it, where it's revealed that it's actually some sort of ray gun. In another episode, the gunslinger rides through a town afflicted with a plague, with there being some plot point of the last building still open.

I know it's not Back. The art style is more colorful and realistic, and the plot is decidedly less silly. I think I read it in the last 4-5 years (since 2014 or so) and it was not completed at that time. The tone was definitely greyscale with the indication being that neither character was really evil, just very driven.

And, as so often happens for me, a few more searches later, and I found it. I wound up on the TVTropes Weird West page, and clicking through the entries gets me Next Town Over: 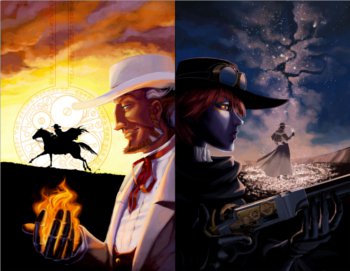 John Henry Hunter is a notorious and dangerous outlaw with pyrokinetic abilities; so infamous is he across the territories that he has a reward of $10,000 and counting on his head. He is seen in the town of Lookback taking a valuable necklace of personal significance to him from a French maid while torching the saloon they are in.

Trailing after him is the equally dangerous and mysterious Bounty Hunter Vane Black. Vane, a stone-faced woman with an eerie pallor, is an old acquaintance of Hunter's who is hunting him down for having wronged her in the past.

As they battle across the frontier, they take advantage of every object, person, or animal which might help them to achieve their goals. And neither of them seems to care much about the collateral damage they cause during their confrontations. This is not a good thing for the other inhabitants of The Wild West.

Gray and Gray Morality: Bordering strongly on Evil vs. Evil. Vane is a borderline Villain Protagonist with ruthless tendencies and committing many morally questionable actions (ranging from gradually turning her faithful steed into a mechanical abomination to shooting a boy and his dog and a young woman trying to protect Hunter), while Hunter is a reckless thief with little concern for collateral damage or human lives and apparently was a serial killer targeting prostitutes in the past. At the same time, though, both are given sympathetic attributes, and their conflict is definitely not at all simple.

Masochism Tango: It gradually emerges that Vane and Hunter used to be romantically involved, and still have... feelings of a sort for each other. Vane in particular has very violent ways of expressing them. 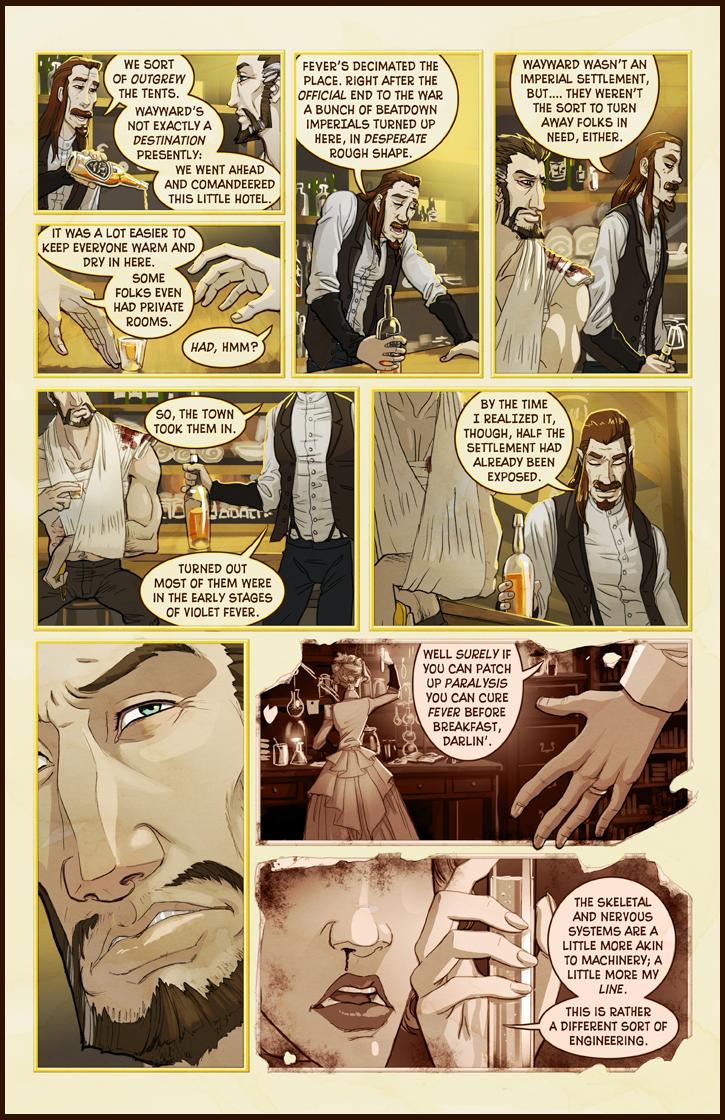 Not the answer you're looking for? Browse other questions tagged story-identification webcomics steampunk or ask your own question.

10
Fantasy webcomic about an annoying child and her guide
5
Webcomic about a boy visited by a young demon who emerges from under his bed and loves cookies
7
Movie with female protagonist that can travel a few seconds back in time
1
Webcomic where a blond gynoid becomes a pop superstar with a cover of "Don't Hate Me 'Cause I'm Beautiful"
1
Webcomic involving an armless girl fighting sea monsters
2
Webcomic with a mermaid and a bird legged android?
4
Webcomic with anthropomorphic animals featuring a possible ghost in the library
7
Having trouble remembering a title about female assassin with nano suit or some sort of armor
10
A story where the female main character commits suicide in order to avoid torture but gets sent back in time