This was published in the 1960's. The protagonist has purple hair and is on a quest of some sort that takes him into increasingly technologically advanced societies. He learns to ride dragons, and encounters a particularly fearsome scourge called "Dis": a pathogen that devours flesh. At the end, despite all his increased technological skills, it is his trusty throwing sword that saves the day. I read it every time I visited my grandparents but cannot recall the title of the story. Another detail that just occurred to me: the book could be flipped upside down to reveal a second story. The two must have ended in the middle of the book, though I don't recall anything about the other story. 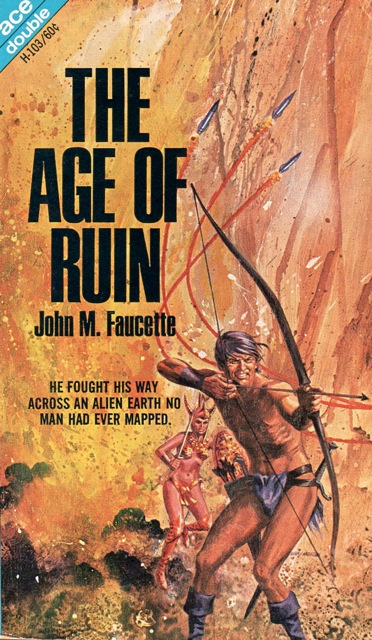 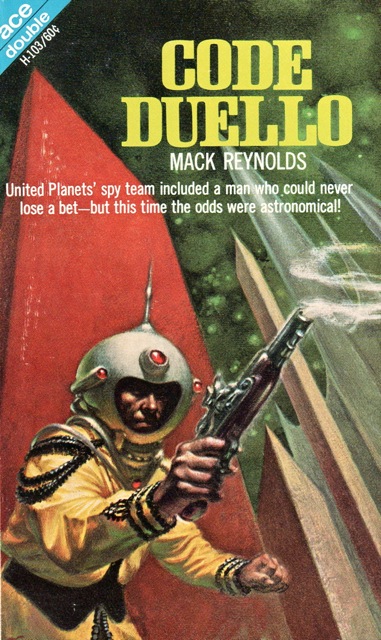 The embarrassing thing is that I actually own a copy, but in my case I only remembered the plot of the other half of the book -- Code Duello. I had completely forgotten such details as the narrator of The Age of Ruin having purple hair. That fact is established in the first paragraph, as is the part about the hero's beloved throwing sword. I'll quote the first few lines to illustrate those points:

Help me. Help me. Jahalazar, came the soft voice. Like silken feathers it eased its way into my brain, rousing me from the depths of sleep. I, Jahalazar of the purple locks, sprang awake, a sinewy arm reaching for Chernac, the Throwing Sword, as I rolled from the bed to alight upon shoeless feet crouched. I raised the steel length of the Throwing Sword before me.

And you very nearly had the name right for that flesh-eating menace you described. If you had put a second "S" at the end, you would have nailed it: "The Diss." Here's a quote from the narrator's first encounter with that particular threat:

"The Diss!" the little guide barely whispered. Puzzled, I watched the powerful stream of sea water rise up toward the offending tower. The citizen bowmen held their ground, shooting until the last second. Then they started running for the roof entrance to the building. But there were too many for one door. Only half were through when the spray of sea water hit the tower, cascading over and drenching everything and everyone. To my horror, whenever the sea water touched any of the unsuited citizen bowmen, brown spots appeared on robe and skin. Before my eyes fish-men dissolved into squirming masses of wriggling brown spots that fell out of sight to the tower floor below the waist high protecting stone slabs. Then the hose nozzle began to swing in our direction. A brown speckled arch of water, glistening redly in the rust red of the sun, climbed toward us.

I tracked this down by, after posting my previous comment, Googling for such combinations as "Ace Double" and "purple hair." Rather to my own surprise, it turned up pretty quickly when I tried that. In the process, I learned that John M. Faucette was an African-American science fiction writer, and that, in his own words:

So I began a long program of trying to get better at the art of writing.

But before that time arrived, when the sword and sorcery genre was big, I wrote one about a swordsman who had purple hair and purple skin. I called it THE AGE OF RUIN. Why did he have purple skin? Because it couldn't be black.

AGE OF RUIN satisfied the rebel within me ... for a while. It was evident the field was totally white and white oriented. I began to be dissatisfied with that. It was always a white man went to a planet and kicked the butts of the grey, brown, red, blue or green aliens.

4
Title search: ISS and UFO
7
Search for title of military SF
10
The Purple Planet
11
Scifi book of which I thought the title was “The purple orchid”. Could have been by a German author?
7
Fantasy series about search to find and reunite a mythical sword, shield and helmet