Children's short story about material that accelerates away from gravity

I am looking for a children's short story about a scientist that invents a material that is pushed away from other matter. It accelerates away from gravity instead of towards it.

He makes several small (golf ball sized?) spheres of the material. He could wrap his fingers around a ball, but it would push his fingers out away from it, so it was hard to hold onto. If he let go of one indoors, it would zoom up to the ceiling.

He could put several balls into a chest harness that would let him hover. He had to balance the outward pull of the material against the gravitational pull of the Earth on his body. He also had one or more of his children hold onto to him.

One of his children wears a harness that just balances his weight against the upward acceleration so he can appear to be on the ground, but is actually slightly hovering. The child uses the harness to win events at a track and field competition.

This is not the movie Flubber, or the movie, The Absentminded Professor. It is a written short story.

This is "Peter Graves" by William Pene du Bois. The anti-gravity material is called Furloy.

The cover image shows the harness you mention (with golf club head covers holding the Furloy balls, and a fishing rod safety tether). 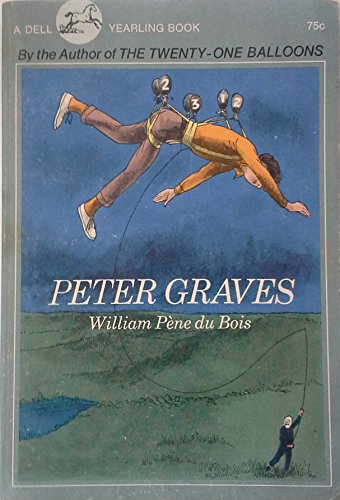 And here's a scan of an interior illustration showing the track and field competition. The boy just hops gently and flies way over the high jump crossbar. 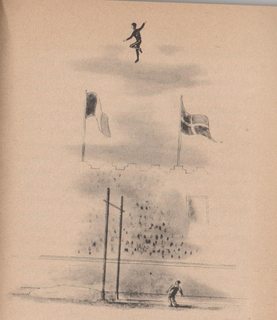 It's a wonderful book, just short in my estimation of the same author's superlative "21 Balloons"

3
Novel involving an inventor who frequently creates incidents, and a young boy who winds up being his assistant
6
Utopian society based on the alphabet