Novel: Woman lives her entire life, then finds out it was just practice

I read this book sometime between the late 1980s and the early 1990s. The story follows the life of a woman, which starts when she is a newborn in a kind of robotic creche that cares for her, teaches her how to speak, and provides basic elementary school level knowledge. Once she gets to early childhood (maybe 5 years old or so?), she learns that there is a world outside the creche and is allowed to go out into it.

Outside is a futuristic society that I'm not 100% sure was supposed to be Earth, though from the impression I recall it could have been a future Earth with a low population. She finds other people and has various adventures (none of which I can recall), and she eventually reaches old age. She reflects back on her life on her deathbed (I think) and eventually dies.

At that point, she wakes up again and finds herself as an infant in the same robotic creche. The creche explains to her that her previous life was a simulation, and that this is now her real life -- she will be much better prepared for it now that she has had a chance to experience it once and learn from her mistakes. The story ends before describing anything about what she does in her real life.

I think that there may have been a kind of parallel or framing story intermixed with this, which may have been about explorers examining the ruins of a dead civilization on an alien planet (maybe the future of the main character's planet?), but the framing story didn't have as much of an impact, and I'm not sure I'm not conflating something from another story here.

The book was a paperback, probably around 250 to 300 pages or so based on size, having a bluish cover showing a landscape with a gas giant type of planet in the sky and buildings/figures in the foreground. I'd guess a late 1970s publication, but it could have been earlier.

I think that the author had a woman's name. I'm pretty sure that it was NOT a big-name author, unless it was a pen name for one of them. I recall looking for other stories by the same author but not finding any, so this book and author may be pretty obscure.

I remembered enough to find this one with some searching on ISFDB. It's From the Legend of Biel (1975) by Mary Staton.

An Amazon review by Doran Jensen mentions the essential plot point that I recall:

Before a child can be "released" into the Thoacdien world they are given a chance to live a life before they are born, a chance to work through their fears and limitations so they can be truly themselves and part of the galaxy spanning civilization to which they will belong.

I don't have a copy handy to provide quotes, so I'm not sure how much of the rest of it I may have misremembered. The cover isn't quite as I recall -- the "gas giant" was actually a large round building behind the others: 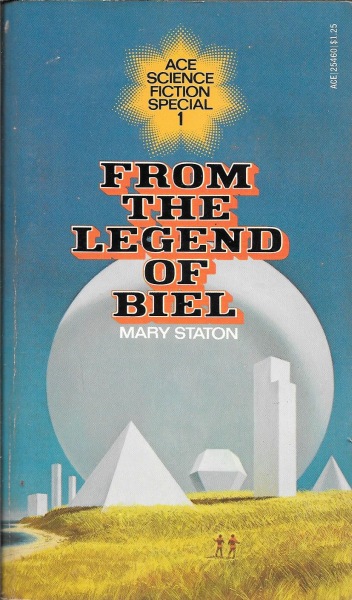 The author only published one other book, in 2007, which I think was after the time that I looked for her other works online.

For anyone interested, it appears that an electronic copy can be "borrowed" from the Internet Archive.

20
Fantasy novel about kid who finds out the 'evil warlock' is his father?
8
Book: Female protagonist transformed into alien on alien planet
15
Dystopian book series: girl goes out of the barrier her society lives in because of radiation
7
Trying to remember a sci fi book title I read in the 80s
14
90s (or earlier) novel: on a cut off colony after FTL travel wipes out life and becomes impossible, an emissary woman starts a college
13
Story about a woman who believes every bit of bad luck removes significant amounts of time from her life expectancy
10
Sci-Fi book with girl who spent 3 years in space
3
Manga about a girl who lives her life as if she was in a manga
24
Short story, woman has something that directly stimulates the pleasure centers in the brain, man finds her
14
Novel where a woman and her car are transported back in time to ancient Rome