Can a Federation colony become a member world?

In various incarnations of Star Trek, we observe the Federation founding and maintaining numerous colony worlds. These worlds are typically (though not exclusively) inhabited by humans, have a relatively low population (for example, New Providence had less than a thousand inhabitants), and typically serve as remote flashpoints or otherwise exist to portray a "frontier"-like atmosphere without technically leaving friendly space.

On the other hand, we see various worlds in various stages along the path to full member-world status in the United Federation of Planets (UFP). What I noticed about these candidates, however, is that they are the homeworlds of civilizations, such as Bajor and the homeworld of the Evora, not previous Federation colony worlds that have expanded beyond "colony" status.

Can a Federation colony gain full member world status in the UFP, or is membership only granted to the homeworlds of civilizations (with colonies, presumably, remaining under the jurisdiction of the founding member's government or the entire UFP government)?

Mentally, it is easy to compare the UFP with modern-day nations with a Federal political structure such as the USA and Canada which have followed the general model of admitting former territories to full membership upon reaching designated population, economic, or political goals, but it is not clear if the analogy is meant to go that far.

According to the Star Trek: Star Charts factbook, there are several colony worlds that are full members of the Federation including Deneb V, Rigel X and Cestus III.

We should also mention that there are numerous Earth colonies that are also founding or full members including Earth's Moon, Mars, Terra Nova and Izar. 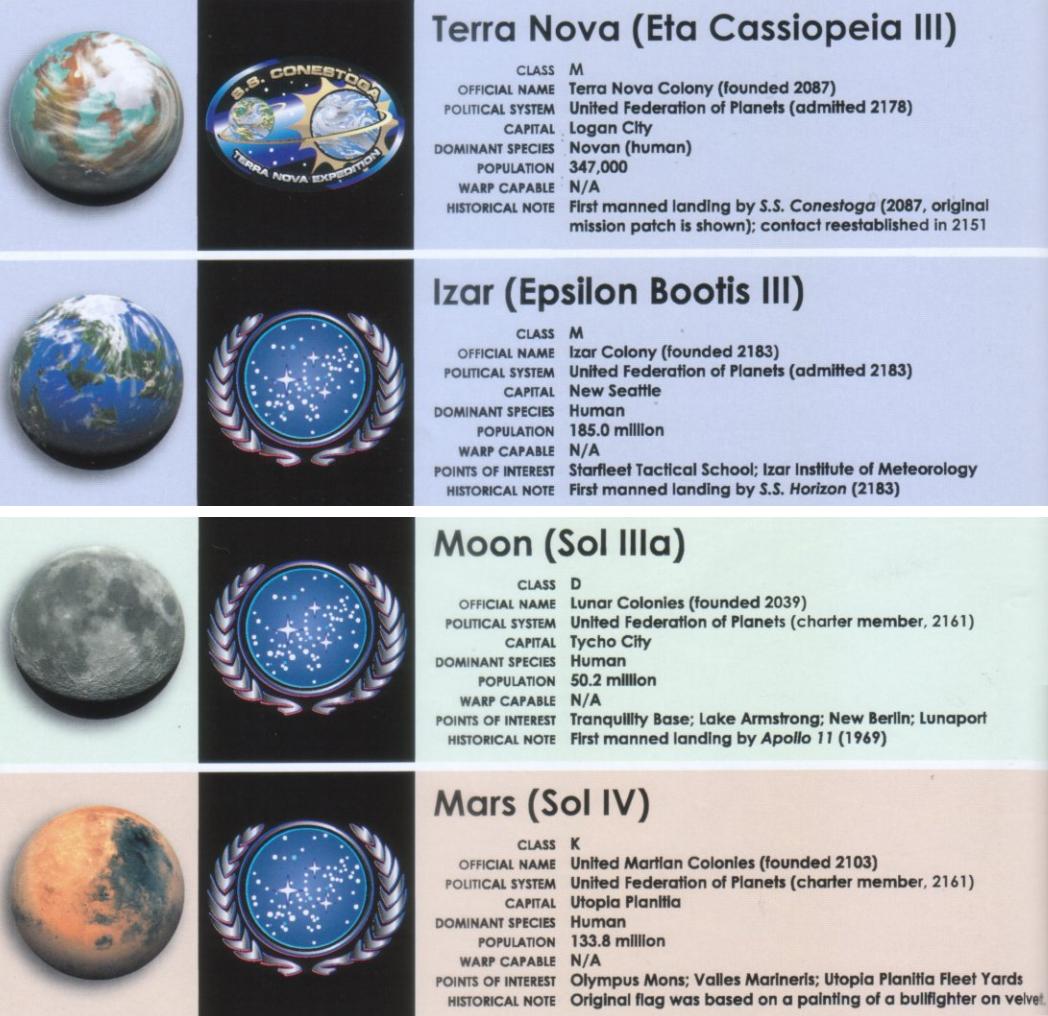 The planetary list includes several worlds explicitly named as colonies, including Worf's (adopted) home planet of Gault which he states is a "farming colony" on several occasions.

According to the Last Unicorn Game RPG sourcebook on the Federation The Price of Freedom, colonies are not members of the UFP. The relevant chapter is on page 42 of the book.

Colonies established by a specific species or government are represented through their homeworld's delegation:

The UFP sees the colonies of a specific homeworld as an extension of that planet's population and government.

There is also, apparently, a fear from some that giving membership and representation to colonies would unbalance the UFP to favour the species with the most colonies.

Some established colonies want to send their own delegations to the Federation Council and be recognized as full member worlds. However, some species without many planetary colonies fear this will unbalance the UFP in favor of more populous or widespread species, shutting them out of government.

Finally, in Star Trek: First Contact, Picard tells Lily Sloane that there is over 150 member planets spread over 8000 light-years. That seems a small number to include the colonies given that it is hinted throughout the series that there is a large number of colonies, and new one being founded on a regular basis as the Federation expands through the galaxy.

The Federation does not prevent its citizens from leaving Federation space. Once they do, they are free to colonize a new world and apply for Federation citizenship.

(I can't find any in-universe proof, but I'm pretty sure the Federation is democratic and treats all citizens the same regardless of their home-world.)

8
Are all members of the United Federation of Planets on actual planets?

12
Does DS9's "Prodigal Daughter" imply that Trill is not a Federation world?
24
Has the Federation ever destroyed a planet?
11
Can a private citizen of the Federation legally obtain a starship?
10
How much authority does the Federation President have?
4
Technology sharing with new members in the United Federations of Planets?
10
Can an individual apply to become a Federation citizen?
5
Are Starfleet and the Federation distinct entities? Why does Saru say they are?
17
What are the benefits and obligations of a world that joins the Federation?