This cartoon involves cards and monsters. I watched it on TV but I don't remember the channel name. It aired between 1998-2012.

This guy receives his father's device, which is white in color and u-shaped with 5-6 led lights. He summons a powerful nature card while on a cruise. His father is fighting evil guys at a portal.

There are lizard headed characters which drop cards for this guy.

As suggested by someone I checked this list but it isn't one of those ones. 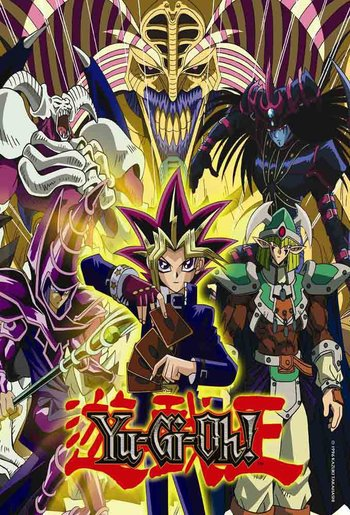 This is one of the anime in the list mentioned in the question, but I'm writing this up as an answer anyway because of how closely it matches the OP's description. Even if they're not mistaken and this really isn't it, someone else may come here looking for this show later on down the line.

This cartoon involves cards and monsters. I watched it on TV but I don't remember the channel name. It aired between 1998-2012.

There was a Yu-Gi-Oh! anime that aired in 1998, but it used a slightly different premise. The one familiar to most people - involving "duels" between participants who use cards to summon monsters - aired from 2000-2004, and was probably repeated.

This guy receives his father's device, which is white in color and u-shaped with 5-6 led lights.

Protagonist Yugi Mutou, and the series' other duellists, fight using "duel discs" that look like this:

The glowing blue bits are where the cards are inserted in order to summon them onto the battlefield. As for the "father" part, Yugi inherited his grandfather's deck, and quite possibly his duel disc too, though I'll have to double-check that.

He summons a powerful nature card while on a cruise.

This might be "Exodia, The Forbidden One", which you can see Exodia in the background of the first picture. Summoning it wins you the duel automatically. Yugi does just that in the very first episode, while duelling Seto Kaiba. In the third episode, the cards that summon Exodia are then thrown off a cruise ship.

His father is fighting evil guys at a portal.

In the second episode, Yugi's grandfather has his soul taken by the villains. (This is why he's on the cruise ship - to go to a tournament to get his grandfather's soul back.)

There are lizard headed characters which drop cards for this guy.

I don't remember any such lizard-men, but it's been years since I watched this show, so it's possible they existed.

Redakai: conquer the kairu, this is about a guy who can turn into the monsters he summons, I always been wondering what the show was called, it aired on cartoon network awhile back

7
Anime movie involving people exploding into monsters?
7
Animated movie about a card game that came to life
5
Cartoon/anime that featured a huge orange see-through beast that was controlled by the protagonist
3
Anime with monsters contained in cards
2
Old cartoon/animated series? - desert, cupola, monsters