Old book series about time traveling. Had a game series too maybe?

This is farfetched, but I'll try anyway.

I remember when I was a kid, I got a book that came together with a game. I am certain that this was before Windows XP, but not sure if it was DOS only or there was already Windows 95.

The hero possibly was a teenager, that went after an evil guy that kidnapped his girlfriend, and went back in time to save her.

One thing that I remember clearly is that when he traveled, he used "eternities" as a measurement. Like "Then after two eternities and a half I arrived". I am pretty sure it was a series for both games and books.

I can't tell how it ended because I played/read only the first one, and never managed to get the others.

The game was a action/plataform one, kinda like Flashback.

Since my memory is kinda blurry, I think but I am not certain it was translated to Brazilian Portuguese, unsure if only the book or both the book and the game

I cannot believe I've found it. My mistake was to look for it in english.

The series I was looking for is Time Runners(Yes, it is ITALIAN and it looks like it doesn't have an english wikipedia article).

It was translated to Portuguese via Editora Abril. 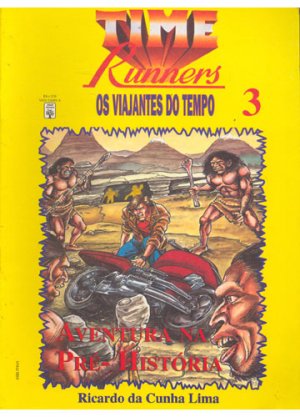 I also found a description of the game here but here is the relevant plot:

Episode 1 starts the adventure: we are introduced to the hero, Max, his girlfriend Jessica and his friend, super-genius Lucas. At the same time, in a distant future, the Skunks, intelligent robots who enslaved the humans (mmmhhh... sounds original), lead by their king who calls himself the Chronodemon, are going to invade various epochs using a time travel device. Trouble starts when a similar machine made by Lucas creates an interference, and a Gate opens in Jessica's house - the stone in the ring that Max gave to her as a present, is of the same type used by Skunks for time Travel. The robots kidnap Jessica. Lucas puts a time travel device on a scooter, and Max uses it to start the risky rescue of his beloved one, ending up in the prehistory, where he will find some allies...

The italian version had 30 parts. I've found a mention that it was canceled on the 11th chapter, but I cannot confirm. All I can tell is that I can only find up to a Time Runners 8 in portuguese, but this has the "Final battle" title, so I am unsure if they compiled the versions together.

For more info about the game instead of the books, I've found this review of it, and also this gameplay:

I've found this by doing the opposite of usual ID questions. Instead of looking for the story details(that were blurry) I went and looked for who translated things to Portuguese in the 90's. Then I tried looking for the list of published things from them at that time. I went through the catalog from Brasoft first(Which wielded nothing) and then I found this forum post from 2008 with a "List of games Officially released in portuguese", where I saw Time Gate, and then the winner, Time Runners

4
Book series about a paraplegic?
17
First book of a series: boy disappears from his life, becomes time travelling agent
9
Fantasy book series about persecuted people with elemental magic powers
8
Book about a boy that enters a medieval fantasy PC computer game
9
Book about a girl who had powers to control darkness/night
6
Book about a kid who gets recruited into a think tank via computer game
17
Children's / YA novel and game about travelling back in time via an old tree