Cartoon about a boy who schools with aliens

It's an old cartoon. I believed it's American which, of course, uses English. I watched it in early 2000s (around 2004-2006). All I can remember is that there is a boy who befriend with an alien slime and an 'alien chicken who can launch rockets'. They are kinda like in space school. And one of his classmate (I believe he is the strongest kid in the class) can grow into a giant by blowing his thumb. The main character didn't understand why other kids became scared when the "strongest kid" put his thumb on his mouth then he realised when the "strongest kid" grew so big.

I was really little back then so it's so blurry now.

This is an episode of The Fairly Odd Parents, "Crash Nebula" (which was really more of a stealth pilot for Sprig Speevak). 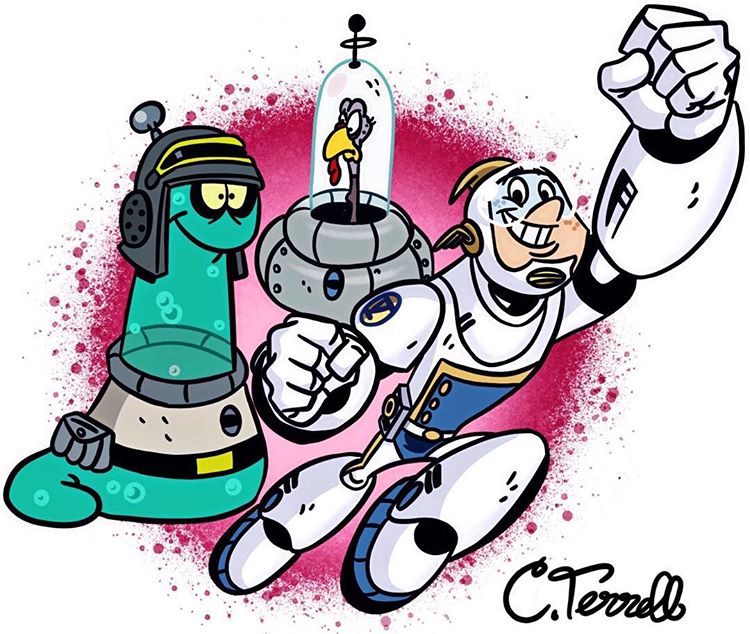 Sprig Speevak is leaving his parent's farm for an intergalactic academy where he will learn to be a space hero. But first, he has to learn to survive space high school.

I found it by searching for cartoon school alien chicken, which got me this Reddit thread:

Trying to find a recent cartoon that i saw only one episode of where the main character reaches a space school or space ranger boot camp, he befriends an alien chicken and blob like alien. He tells the story that he saved an alien (insect?) princess on his farm and he was sent as a special student. The girl had white skin and a ponytail i think and her hair was black and sort of like liquid, floating and small globules would float around the main hair body. He gets in a fight with the popular guy that looks a bit like a young Sinestro (pointy ears and gelled hair) save for the skin color and moustache. The chicken and the blob help the main character showing that they can pack a punch. The main character saves the girl from falling debris i think caused by the popular guy (think his power was blowing air into his thumb to pump his muscles).

Ving is the one who can inflate himself.

He is the resident bully at the Celestial Academy. He became Sprig's enemy right away. Ving is jealous of Sprig because he saved Princess Galaxandra and became her favorite student. He also likes Ani and wants to be her boyfriend, but she rejects him. He has the power to turn into a huge giant and do some massive damage.