What was the first science fiction or fantasy multiple choice book?

But I am not limiting it to the 20th century. I wonder if someone in the middle ages wrote one. It might not have been some monster with skill 10 and stamina 6. If I had to guess my intuition, based on having played 19th century German board games, would be that there was some German late 19th century fantasy author who made a multiple choice book.

But I don't know: who was the first to write one?

"Alien Territory" (1969) by John Sladek. There are earlier gamebooks that I can find with the earliest being Consider the Consequences! (1930) by Doris Webster and Mary Alden Hopkins and Treasure Hunt (1945) by Alan George but this is the first sci-fi gamebook I could find. It is described as:

a story composed of 36 paragraphs arranged in a grid and connected by arrows which define a wide variety of possible paths through the narrative.

The Encyclopedia of Science Fiction, Gamebook

It was originally published in New Worlds #195 (November 1969) and you can read it from the images below as it was published originally. 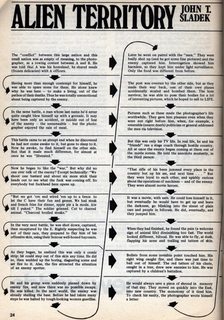 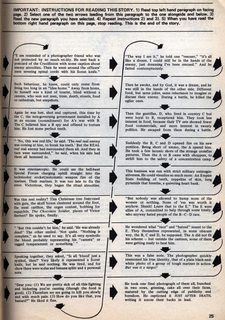 On the (Warning: TVTropes link) Gamebooks page, the Originators section lists TutorText as "the first known gamebook." The first of these was originally published in 1958. Unfortunately they are all educational, so not on-topic.

The next point lists 3 "popularizers" of gamebooks, none of whom published any books earlier than 1958.

The Choose Your Own Adventure series are the earliest I've found that clearly include fantastic elements (time travel, aliens), and the first of those was published in 1979.

As best I can tell, it was likely Journey Under the Sea, published under the "Adventures of You" imprint in 1977, and later re-released as a CYOA book. It involves a then-futuristic submarine. There are prior gamebooks, but they're rooted in reality.