I think I read this somewhere in the interval of 1993-2004, and I think it was in an issue of an SF/Fantasy magazine which was new on the stands at the time. As opposed to being a back issue from the 1980s which I'd picked up at a sale, for instance. At any rate, I'm sure I read this fantasy story in a magazine, rather than a book. Which is not to say it couldn't have been reprinted later on. The story was definitely in English.

I am almost certain that it had the byline of Esther M. Friesner, but a quick look at her ISFDB Bibliography (linked to her name) shows she had many short stories published during the timeframe in question, and none of their titles leap out at me as obviously being a great fit. To forestall an obvious guess: My understanding is that anything printed in any volume of the Friesner-edited Chicks in Chainmail series of fantasy anthologies is guaranteed to be a previously unpublished story, so nothing in any of those would have first caught my eye in a magazine.

Elements of Style and Plot

The sun was setting behind the verdant hills to the west of the castle, and the lengthening shadows of the trees pointed toward the elegant turrets atop an enchanted palace, from whence the dulcet tones of the Queen of the Fairies could be heard through an open window as she voiced her reaction to the latest news despatch to arrive in her domain.

"Whoa! They did what, now? I am, like, totally freaked out!"

The rest of it proceeds along similar lines. Narrative prose full of elaborate sentences, in sharp contrast to how the spoken dialogue was based upon how a stereotypical "Valley Girl" would express herself in certain circumstances. (Not that anyone in Arthurian Britain had ever so much as heard of the San Fernando Valley.) Wikipedia tells me that this type of dialogue is called "Valleyspeak" or "Valspeak" nowadays. I don't think the Queen (Morgan, or whoever she was) was the only person to express herself in that style. (Although I could be wrong; it's been a long time.)

So! Does anyone think this sounds familiar? I'd like to refresh my memory, if possible, and see whether or not I now think that style-switching was a success, overall -- or just annoying after the first humorous shock wore off.

Beneath the great elf-mound all was revelry, but joy and wanton merry-making both ceased in an instant at the sound of hard-soled boots upon the stones. Wild song and wilder dance died outright at the coming of the messenger from the kingdoms of men who strode into the great hall and proclaimed in a voice of heartbreak, "Arthur is slain!"

And in the awful silence that followed, great Morgan looked up from the adoring eyes of the young elfin bard who had been wooing her with songs of courtly love. Her face was stricken white as bone, her eyes two darkened moons made both bright and tender with astonishment and grief, and the flower of her mouth opened to cry out in the heart's deepest pain:

"Aye, milady." The messenger knelt upon the rich silk carpets that bestrewed the hidden palace. "Way."

"Oh wow," said the Queen of Air and Darkness. "If you're yanking my chain, you are so majorly toast when I get back." And she summoned up her dragon-drawn chariot and, whisking the cloak of night about her shoulders, she burst from the elf-mound back into the kingdoms of men.

She was not gone longer than it took for her subjects to fall into a dozen different clusters, each abuzz with dire speculations, their terrified whispers filling the high, tapestry-hung hall. She was back among them in a flash of flame less devastating than the look of utter rage and despair in her eyes.

"So 'kay, he is dead," she announced. "Well, not totally dead yet but, like, you know, close enough for jazz. Bummer."

An elf-maid of surpassing beauty, even among the Fair Folk, came forward to kneel before her liege lady. "Your Majesty, how came this calamity to pass?"

Great Morgan scowled. "Bug off, Betty; I don't wanna talk about it."

The elf-maid slowly arose to her feet and called her courage to her, armor puissant albeit invisible. Daring more than death, she reached out one slim hand and rested it upon great Morgan's shoulder. "I feel your pain, but if you don't verbalize your trauma, you're going to internalize it and the resulting neurosis can’t help but disalign your chakras."

The Queen of Air and Darkness glowered at her handmaiden and out of her parlous anguish and woeful torment of soul rejoined, "Hey Betty, go fuck yourself, 'kay?"

I suspect that you are indeed thinking of Esther Friesner's "Wake-up Call". It's Arthurian fiction, published in Asimov's 2000 collection, Camelot, as well as Up the Wall and it does involve modern speaking patterns. It was published in a magazine, Isaac Asimov's Science Fiction Magazine, December 1988 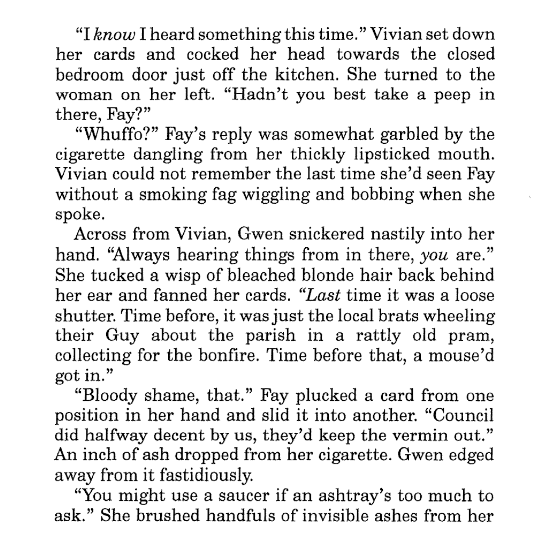 Possibly of use to your recollection, Arthur still speaks in an archaic manner. 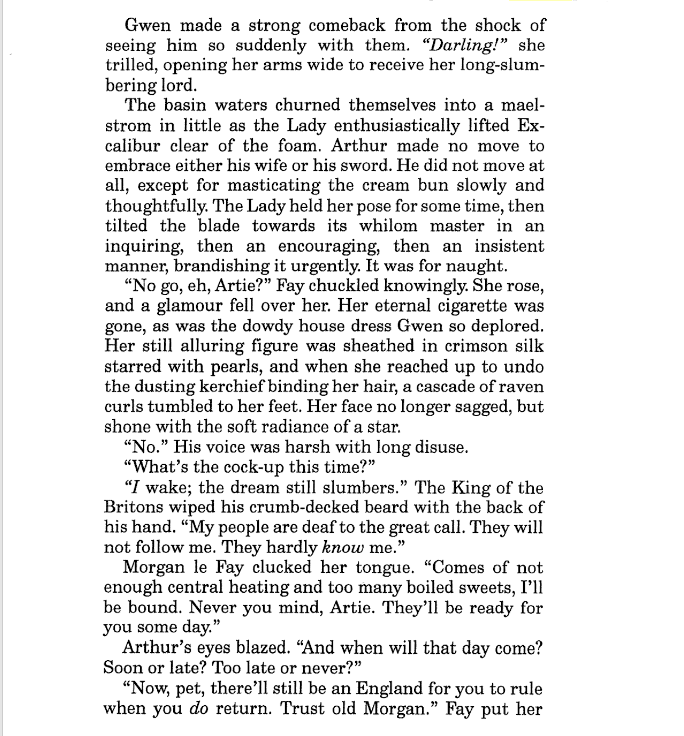 This also fits with you believing the story opens with Morgan le Fey speaking.

Not the answer you're looking for? Browse other questions tagged story-identification short-stories arthurian or ask your own question.

12
90s fantasy novel about a girl on quest with talking pig (I think)
18
Fantasy Story about The Phantom Tollbooth/Where the Wild Things Are Kids as Adults
4
Stories about Lancelot and Galahad, which I heard on a record
15
Arthurian novel with sci-fi tropes
17
Series about female warrior in Arthurian-like medieval Britain