Short story where a retired detective assists his police officer daughter through video surveillance nanotechnology imprinted on a child's balloon?

The protagonist is an older man, probably in his 60's. He's a retired police detective of some sort, and he is also ailing physically. He lives in a nursing home, and IIRC is not physically well enough to undertake much activity. There are several moments of grim humor between him and his roommate. Both make wry jokes about having a new roommate if a surgery doesn't work out, etc.

The man is able to keep active, and assist his daughter (who is an active duty police officer) through an advanced technology that allows the surface of an object (in this case, a balloon carried by his grand-daughter) to be sprayed or imprinted with a sort of camera system. I believe it is supposed to be based on some cutting edge nanotech. The protagonist is able to see and hear and communicate through the system using a monitor or computer in his room. The only indicator of its presence is that an image of his face appears in the balloon when he's linked up to the system.

The current case his daughter is working on is investigating a local drug ring she believes is operating out of a local carnival or circus. She's at the carnival with her young daughter, who is not aware of the nanotech imprinted system on her balloon.

Much of the story reads more like a crime drama than sci-fi, other than the futuristic communications system, which plays a pivotal role in several scenes. IIRC, the protagonist is pushing his daughter to take risks, and at some point the grand-daughter might fall into the hands of the drug dealers.

I can't recall the ending, but I think it was a "happy" one of some sort.

100% positive I read this one in a sci-fi magazine. I'm almost certain it was published in the mid to late 2000s. Unfortunately, my Google-Fu has failed me here, and I haven't been able to find the story, despite the relative wealth of detail I can recall this time.

"On the Bubble" by Rajnar Vajra, published in Analog Science Fiction and Fact, June 2007.

The summary here matches your description of an old man, unable to get out by himself, using camera technology sprayed into the side of his grand-daughter's balloon:

In Rajnar Vajra's "In The Bubble," the main character and narrator, Fred Horton, is an elderly cancer patient. While physically confined to a hospice, today he is virtually accompanying his daughter-in-law, Amanda, and his granddaughter, Eve, to a fairground—virtually, looking out at them from an "x-change" display spray-painted on the surface of Eve's balloon.

The story takes its time, the reader having no inkling what turn it will take in the first quarter, but it lucidly develops the main character and the relevant technology, which may be more plausible than it seems. (Spray-on electronics have had quite a bit of press as of late, particularly spray-on photovoltaic cells that may make solar energy production even more attractive than it is now, and Vajra wisely sets his story far enough in the future—2028—that it will be quite a while before it dates if he turns out to be wrong.)

The build-up also makes the story's shift into thriller mode properly surprising, though the premise is familiar enough, complete with arrogant, verbose, articulate villain poised to pull off the coup of a lifetime. ... Vajra's twist on the situation, in which Horton has to save his family from his deathbed, does not quite make the story new, but it does lend an element of interest. 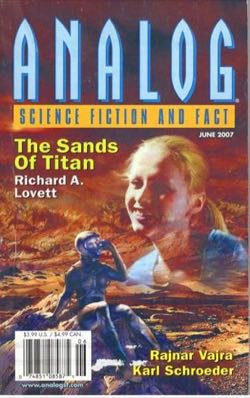 18
Short story collection with one story about a fictional drug
12
A short story about a man enslaved by a tiny demon, who forces him to commit murders?
15
Old short story where man insults a leprechaun, and is cursed to be unable to contact water?
26
Short story where caffeine is illegal and police detective chases down caff-heads?
16
Old sci-fi short story where protagonist is the lone survivor of a space passenger vessel that crashes on a semi-hostile planet?
24
SCIFI Series. Humans can do point to point interstellar jumps but a supernova kills network
12
story about man injected to live very slowly
7
Possibly 1970's story about space cops and gangsters