Perhaps the most famous for using a double-bladed lightsaber is Darth Maul, seen using one in Episode I.

She had two lightsabers that she could fit together to make one double-bladed one.

Similar to Darth Maul's and seen in The Clone Wars.

As mentioned by yourself, Pong Krell has two double-bladed lightsabers. 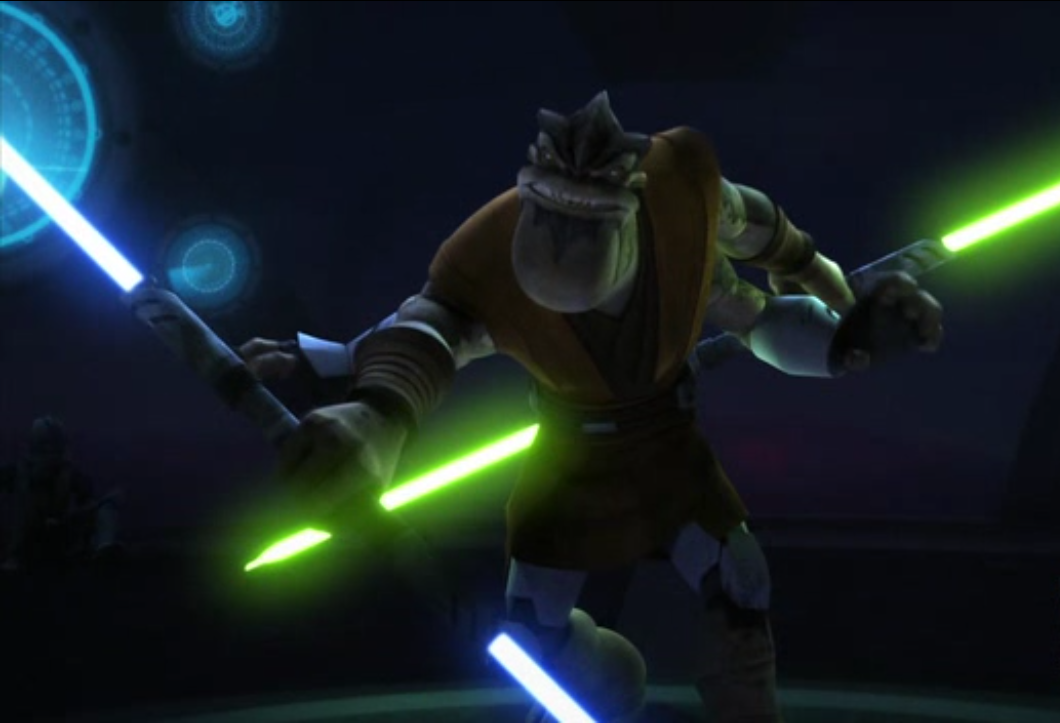 Tosan has been known to use a double-bladed lightsaber as well. 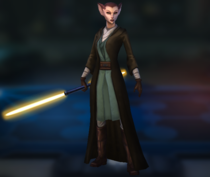 We also have the Inquisitors who used-double bladed lightsabers. The below example is of the Grand Inquisitor. 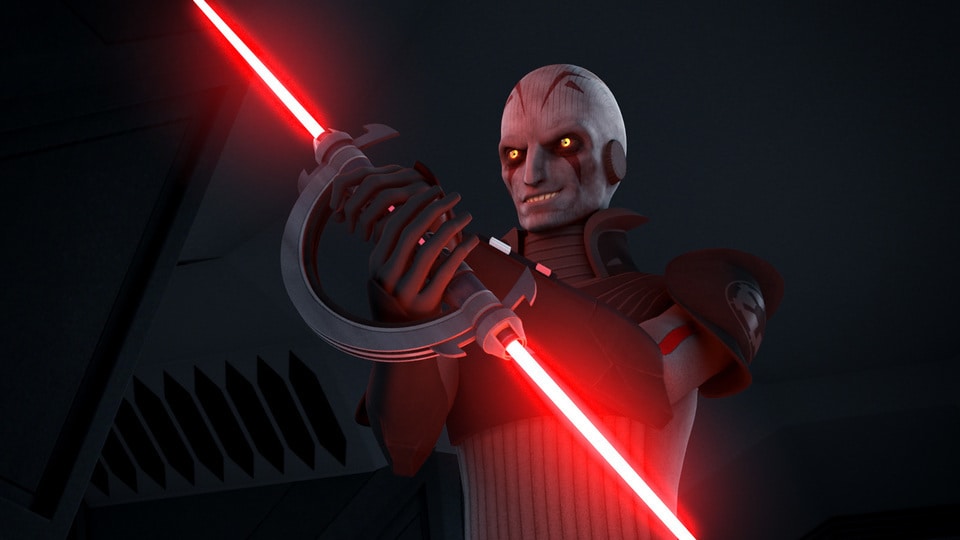 The double-bladed lightsaber, or to use the fan-preferred term, saberstaff, is an ancient and decidedly Sith weapon. It was first invented by the Sith Lord Exar Kun when he lead his Sith to sack the Jedi Order and decided he needed an edge.

A saberstaff is actually inferior to the standard saber blade because of how dangerous it is to it's wielder. Darth Bane's mentor, a Sith named Kas'im, told the young Sith that the main advantage to wielding one was that it gave the illusion of having dual blades, forcing the opponent to split his focus, while in actuality it was only a single weapon, restrained by it's own length. This advice helped Bane learned to eventually best Kas'im in a duel. Bane himself preferred a fanblade-style saber, the kind used by later Sith Count Dooku and his apprentice, Asajj Ventress.

The style itself was composed of mainly sweeps and slashes, very few thrusts, and focused on wide motions. The two most effective Forms to wield Saberstaffs was Form IV, Ataru, an acrobatic style which relied on the user's Force sense and Form VII, Juyo / Vaapad, the most aggressive form which uses Light and Dark in equal measures. The traditional Sith Form, Form V, Djem So, was grossly unsuited to wielding Saberstaffs, as it was an aggressive counter-acting form, using brute strength, and you can't do a two handed chop with a saberstaff.

That said, the lightsaber was merely a tool for the Jedi to use the Force through - a true master could always utilize a double-bladed even if he never trained with one, as empathized by Kao Cen Darach, a Zabrak Jedi who fought the Sith Lords Vindican and Malgus using his single-bladed lightsaber and Satele Shan's double-bladed one.

To finally answer your question of 'How many force users used two doubled blade one?' the answer is one, even though Pong Krell's saberstaffs (saberstaves?) have been seen bending in half by his belt. They are therefore not true saberstaves, but rather saber-chucks. Kao Cen Darach comes close though. (And Malgus, technically, because he also wields his master Vindican's staberstaff after Kao Cen Darach wounds him.)

24
How could Asajj Ventress be a Sith if there can't be more than two of them?
108
Why Do Jedi Use One Lightsaber in Combat?
31
Why do the Sith use red-colored lightsabers, but the Jedi don't?
13
Who were Jedi Temple Guards?
7
Was Rakata's "Force-enhanced" hyperdrive technology ever replicated (or something similar used)?
9
How did Mace Windu conclude that Darth Maul was a Sith?
27
Is Anakin's lightsaber the only one remaining from the 'Clone Wars' era?
3
Why was Anakin Skywalker called to Coruscant during the Clone Wars episode 'Darkness on Umbara'?
6
Why are kyber crystals so expensive on the black market?
5
How many Emperor's Hands were there?