The hardcovers were titled in an orange monospace font on a dark background. This was in elementary school, and they were pretty worn, so from about 1990 at the latest (I think it was unusual that the kid had a computer at his house, and there was no GUI, but I think it had a regular CRT monitor, not a room-sized dinosaur.) The computer had a name - not Herbie, that's the lovebug, but something similar - but I don't think it was actually sentient, just anthropomorphized like you do with important machines. Might have had emotions like a pet, though.

The one specific story I remember is about a contest with a smug kid at school and his supercomputer (Oxford/Ocelot/something like that?). The contest was to find a submarine somewhere in the Atlantic. The supercomputer had more MIPS and was the obvious favorite, but our heroes won the day by looking up actual ocean currents and stuff and plotting a likely course to search first instead of brute-forcing it.

This is Chip Mitchell: The Case of the Stolen Computer Brains (and sequels) by Fred D'Ignazio. Found it by searching variations of book series + computer + "boy named Chip" (thanks FuzzyBoots!) The submarine problem is basically as I remembered it, the robot's name is Herm (for Hermes V), and the front cover was as both FuzzyBoots and I remembered it (interestingly, the font is not actually monospaced, just gives that impression.) 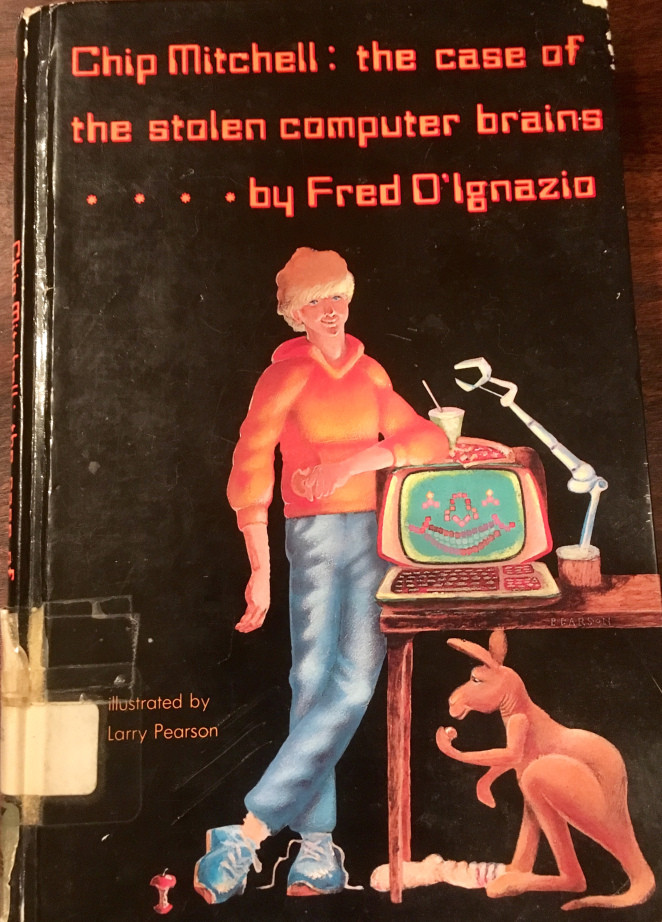 8
Identify series of books about a kid and older man who fight supernatural creatures
7
Looking for trilogy of kids' books about geniuses living on an island
9
80's children's fantasy book with a cat on the cover
10
Story Identification: Golden Age SciFi novel about a boy, his dog, and a giant bear
7
Fantasy series about search to find and reunite a mythical sword, shield and helmet
5
Book about a kid growing up in a colony on another planet with his father, meets a girl also in the colony and they explore together
31
Poem about aliens observing cars on highway?