Someone turned into a human snake movie

Back in the late 90's I saw this scene from a movie or maybe an episode from a tv show.

It was about a couple that goes to a circus/carnival/freak show and I think they see a human snake. I believe they later see a fortune teller/gypsy or one of them might get cursed. I think that after that, they go to the woods and, well "have fun" in the night. What I recall is that either one of them or the fortune teller starts to transform into a snake. I think it was the guy. It did not look like a normal snake, but I remember still having human face with snake features.

I saw this scene when I was like 4 yrs old and I was at my aunt's house watching tv late at night and she saw me and turned the tv off. So I don't really recall much of the movie. I was watching Curse II: The Bite, and it kind of woke-up this memory from my childhood.

The movie looked like it was done from late '70s-mid '90s. I only saw like 20 minutes of the movie, before my Aunt got mad and turned the tv off. I have tried to recall stuff from this movie but I can't recall much, just the transformation scene seemed to be painful. It might not have been a snake but a type of reptilian. It's not the movie Sssssss, either.

Could this be the film Ssssss from 1973?

While it does have a young man being transformed into a snake, and there is a scene at a freak show as you describe, I don't recall the "romantic" scene in the woods you mention. (But then, I haven't seen the movie in a very long time, either.)

From the Wikipedia entry:

Dr. Carl Stoner (Martin), a herpetologist, sells a mysterious creature in a crate to a carnival owner. He later hires college student David Blake (Benedict) as an assistant, claiming that his previous assistant had left town to attend to a sick relative. Unbeknownst to David or anyone else, Stoner is a delusional man, convinced that humanity is doomed and is attempting to prepare for what he believes to be the inevitable by working out a method of transforming humans into reptiles that can survive pollution and any other ecological disaster that would wipe humanity out.

There is a budding romance in it:

David begins a romance with Stoner's daughter Kristina (Menzies), although her father objects and insists that she not have any sexual relations with him.

And the carnival scene:

Kristina visits a carnival freak show and is horrified when she sees a bizarre "snake-man," whom she recognizes as Stoner's previous assistant, Tim. Distraught, she races back home to save David who is currently mutating into a king cobra, brought about by the injections Stoner has been giving him. Stoner is bitten by a real king cobra from his lab and dies, just as David's transformation is complete. Kristina arrives home and finds her father dead with the real cobra next to him. Growing suspicious, the police then arrive and shoot the cobra before heading to the lab where a mongoose is attacking David's neck, attempting to kill him. But the police do not have a clear shot, and as Kristina screams David's name, the movie ends abruptly, leaving their fates uncertain.

Not an exact match to your memories, but it does touch on a few of the things you remember, and it was from the 1970s, as you indicated..

This is a western fantasy that offers some serious messages about life, greed, corruption, perception, and human nature, with the most depressing fortune teller I've ever seen. (He is cursed to tell only the truth, not what people want to hear. The future he predicts for a middle aged woman is all about the meaninglessness and futility of her existence and her inability to find success and happiness.) There's also a giant talking snake who rattles his tail (which he says is the most treasured gift of his ancestors) and is pretty serious himself. He mocks humans as imperfect creatures who have to hang rags on their fragile skin and glasses over their eyes to see while he was graced with good vision, stamina and patience. The snake is in a cage inside the circus of Dr. Lao, an old Chinese man with a long gray beard and Fu Manchu moustache, who does real magic, like lighting his pipe with fire from his thumb, talks with various accents, and says he is 7321 years old. When we see the giant snake, it has a head with a human nose and moustache and looks just like the man he is talking to, Mr. Stark, who is trying to buy the whole town and cheat the townspeople, but who essentially has a good heart. He tells Stark that he has his own cage, just like the snake does, and they're both always testing the bars of the cage. (The snake is done with special effects, possibly claymation or some other stop motion technique.) The circus also includes a Medusa, with writhing blue snakes instead of hair, who the crowd can only look at through a mirror, or they'll turn to stone, as we see one of them do. Both the snake and the Medusa are played by Tony Randall as is Dr. Lao and several other characters, including a cameo as himself. 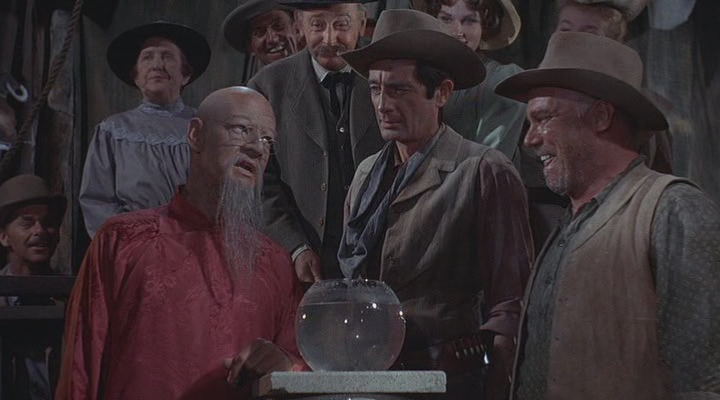 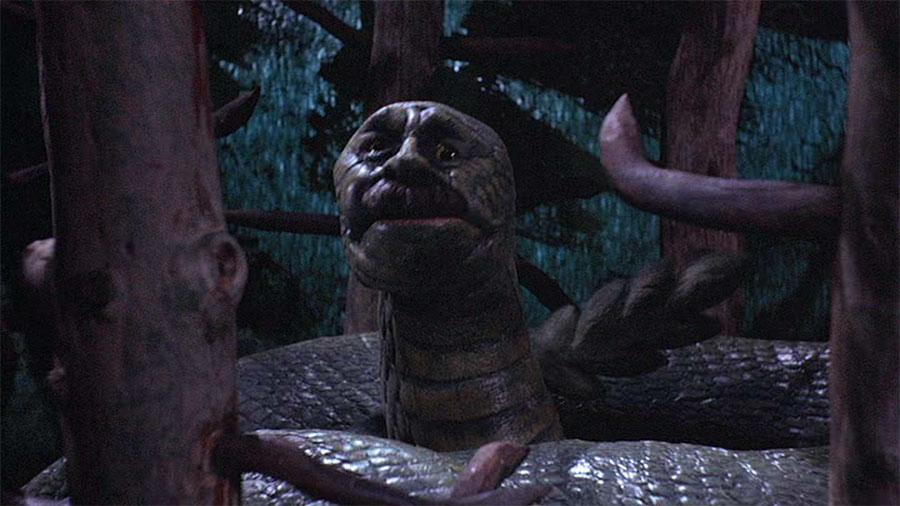 10
Movie: Creature crawls out of its current hosts mouth into next hosts mouth
12
Spanish language fantasy movie: world seen from the movie projection room of the three Fates
8
Animated movie that had black robots that turned people into stone late 1960s to 1970s
6
Which Darkover novel is this?
6
1960s Sci-Fi/Horror Movie ID from Dramatic Final Scene
7
Book about a boy who can shapeshift; he joined a circus after losing a finger
10
Old BW sci-fi movie pumpkin-headed aliens with eyes on the back of their hands
7
80's-ish sci-fi movie with guy/car saving a girl (cyborg?) and car chase at the end of the movie