Has the Thousand Sons involvement in the Heresy been ret-conned?

I may be wrong, but I am sure that in previous versions of the story of the Horus Heresy, the Thousand Sons played almost no role following the destruction of Prospero. Magnus took the survivors and hid in the Eye of Terror waiting to see (or possibly already knowing) the outcome of the great war against the Emperor.

In recent books, however, the Thousand Sons have not only been present at the siege but have played a significant role. In the book The Solar War they allow the forces of Horus to flood into the Solar System and attack through a rent in the warp. And in the book The Talon of Horus one of the characters, a Thousand Sons sorcerer, talks about his regiment being abandoned by the Emperor's Children as they went and did what they do to innocents.

Did I miss something in the original telling of the Heresy or have Games Workshop added in the Thousand Sons as playing a part when historically they were not mentioned?

The events of Warhammer 40,000 are not chronological by any means. GW gives us bits here and there about what happened and then they fill in some of the blanks (some that we didn't even realize were there) at a later date/time. 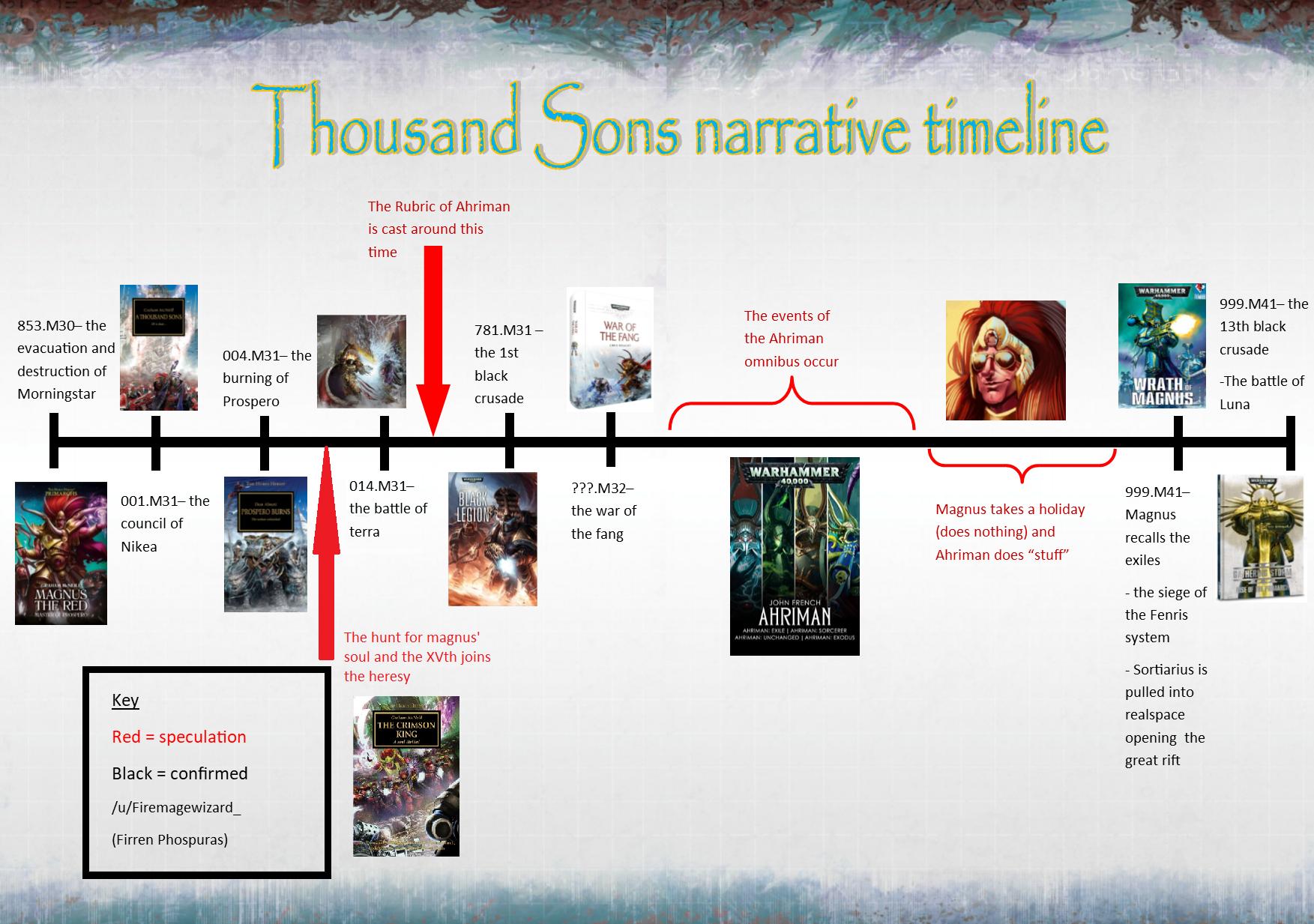 Personally I have always seen the events of 40k on a massive timeline and GW keeps releasing new information we didn't have before on that timeline in random places as they determine we are ready to learn them. The events of the Thousand Sons during the HH are one of these...

So, Magnus retreated and took the survivors of Prospero to the Eye of Terror, but nothing ever explicitly said that he stayed there or, more directly, that he did not participate in the Horus Heresy. It also never mentions anything about Magnus following the battle or even that he lost his physical form. This new information we learned much later about the battle.

As we now know, following the battle, the Thousand Sons retreated to the "relative" safety of the Eye of Terror. After battling Leman Russ, Magnus was in a near death state and ended up being "broken into shards" that his followers where working to collect. As Ahriman and Co. searched for the shards to restore their primarch they didn't really "participate" in the HH, as their primary goal was to help Magnus.

As Magnus was being "rebuilt" he learned that one of his shards was on Terra. Wanting to be as he was before his agreed to accompany Horus with his assault on Terra, but this was mostly to get himself there to recover his shard than aid in the plan to destroy the Imperium.

Note that in addition, each legion was not all travelling the void as one massive force. Some units were here, some were there, and etc. all spread across the galaxy. This was also the case for the Thousand Sons. Though they were never really a large legion they still had much of their number engaged on distant battlefields during the attack on Prospero.

After learning of the battle these units likely had no direction given the legion being in chaos (and Chaos coincidentally) and we don't know how much communication the legion actually maintained with their scattered forces. Some of their number joined other battles, though we don't know if this was under direction or because they believed they were the last of their legion.

While we learn information regarding the events of the 40k universe we have to remember that the universe is vast, we can't know everything that happened, and much of what was known of those times has been lost...

Not the answer you're looking for? Browse other questions tagged warhammer40k horus-heresy siege-of-terra or ask your own question.

6
What happens when Thousand Sons take battle damage?
17
Was the gene seed harvested during the Horus Heresy?
10
If The Emperor wanted to reduce humanity's need for the warp why create the 15th?
4
Do the Ordinatus Siege Engines reappear in the Horus Heresy
2
Have the destruction of Olympia and Nostramo been shown in the heresy books?
6
By the 41st millenium, how many people know the truth of how the Heresy started?
2
has Corax always been this strong?
7
How do the thousand sons replace their ranks?
7
How did the warrior lodges help to spread the Heresy?
11
Why did Magnus join Horus in his Heresy?