Once upon a time I found and played a game where the character goes to investigate a missing spaceship on an alien planet. The planet is covered with a giant organism, which is being experimented on by this crazy scientist guy. The protagonist crashes, and the apparently sentient planet, who calls the scientist guy father, gives the character an alien biological armor to protect him and fight father so that the sentient planet might be freed.

The planet thinks itself stupid, because father told him so. The alien suit has three modes: a human mode, a hulkish form with a big gun, and a smaller dog-like frog with a prehensile tongue which can also climb up walls. The main character has to assure the alien sentient planet isn't dumb and give it some emotional support. Even if the suit is weird.

The crazy scientist guy is using the alien planet to make bio-robots or something. The suit regenerates by tapping into veins. The environment is organic yellows and purples. The suit is mostly yellow with black highlights and tendrils coming off the back.

I believe it was either PlayStation 1 or 2.

You basically went around as a third person shooter, sneaking along walls, fighting enemies, sometimes hiding behind a bio force field the living planet threw up to protect you in safe areas, transforming into the big guy to shoot the giant cannon.

Alright guys, looks like I found it. For some stupid reason it came to me after I woke up. I wasn't even thinking about the answer to this question, at all, for several days, which really annoys the heck out of me. 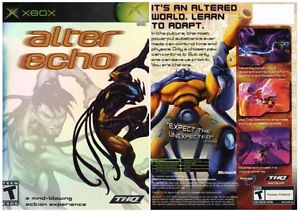 Alter Echo tells the story of a futuristic world where psychics, known as shapers, can use a special substance called Plast to form anything from weapons to buildings. The world's greatest shaper, Paavo, has made a breakthrough on a faraway planet, creating a new, more powerful Plast called EchoPlast. The player, a young shaper named Nevin, is stranded on the planet with his two friends when Paavo shoots their ship down. The EchoPlast, having achieved sentience, gives Nevin a new EchoPlast suit and tasks him with stopping Paavo from wiping out the entire human race.

In battle, the player can morph Nevin's EchoPlast suit into three different forms. The primary form is the Sword form, which is merely Nevin holding a sword. The Sword form focuses on close-range combat. The second form is the Gun form, which morphs Nevin into a massive, slow-moving, gun-toting humanoid. In this form, Nevin can fire various forms of laser blasts and grenades. The Gun form also possesses an unwieldy melee attack. The final form is the Stealth form, which transforms Nevin into a frog-like creature which walks on all fours. This form can use its tongue in order to grab opponents or items and bring them closer to Nevin. This form also has an optional (though brief) cloaking feature to avoid detection, and Nevin can climb certain kinds of walls. Finally, he can latch onto enemies and unleash devastating melee attacks with his claws.

You know, after reading lots and doing research, it's a shame there isn't more bio-organic super suits around.

Not the answer you're looking for? Browse other questions tagged story-identification aliens video-games or ask your own question.

9
Book Ident.? About kids getting sucked into video game
8
YA book about a human girl who saves an cat-like elf guy, deals with racism and magic and a prophecy
8
Older novel - Boy can operate alien machines, saves the planet
7
Book involving Alien Invasion, enslavement of human race
6
Trying to find title of novel where Earth people are taken on board an alien ship
5
Sci-fi movie about a video game with enemies on motorcycles
10
PC video game involving floating islands doing aerial combat
8
Norse mythology video game with someone trapped by their hair