Where did the term "hazard-class" to describe a wizard, sorceress, etc. originate?

I just enjoyed Scott Lynch's "The Fall and Rise of the House of the Wizard Malkuril" in Dozois' The Book of Magic. There seemed to be many more and less obscure references to fantastic fiction, and the term "hazard-class wizard" (or mage?) jumped out at me. I had encountered the term once or twice before in some of the early Thieves' World books (I think in the Tempus/Thales/Stepsons stories). It made me wonder if the "hazard-class" mages in those books were referencing some earlier use of the term.

What author and work originates the term "hazard-class" to describe magicians/wizards/sorceresses/etc. of formidably serious power?

It originated with the Thieves' World series, although it was not a key part of the setting at the very earliest stages. The term does not appear in the original Thieves' World anthology and appears only once in the second volume, Tales From the Vulgar Unicorn, in the story "Vashanka's Minion," by Janet Morris.

In Sanctuary, enchantment ruled. No sorcerer believed in gods. But they believed in the Law of Correspondences, and they believed in evil. Thus, since every negative must have its positive, they implied gods. Give a god an inch and he will take your soul. That was what the commoners and the second-rate prestidigitators lined up outside the Weaponshop of Vashanka did not realize, and that was why no respectable magician or Hazard Class Enchanter stood among them. 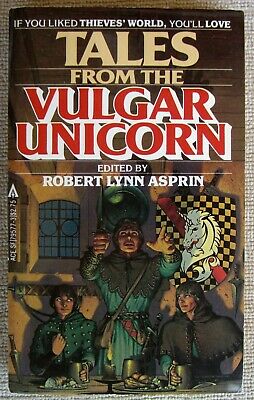 There is no explanation at that time of what a "Hazard Class Enchanter" meant, although it later on came to mean a form of very powerful magic user in the Thieves' World setting.

Their later role in the shared world might be best expressed by the beginning of the description of the hazard mage character class from the Thieves' World Player's Manual for the d20 role-playing game system.

There are mages, and then there are mages. Hazard mages are among some of the best-trained mages in the land, capable of casting spells of incredible power. However, the real benefit mages gain from becoming a hazard mage is membership in the mageguild—an organization established by Ranke as it spread throughout the continent.

Not the answer you're looking for? Browse other questions tagged history-of wizards thieves-world or ask your own question.