Who were the recurring characters depicted on the Thieves' World covers?

The Thieves' World shared-world anthologies had a memorable series of book covers. Three recurring characters appeared on these covers (for example, see the covers from the first six books below). I assume that the blue-star adept is Lythande, and that the black-haired youth with the bangs is Shadowspawn. Who is the blonde figure (on the right on the first two covers, on the left on the third cover) a representation of? 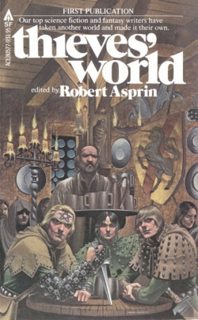 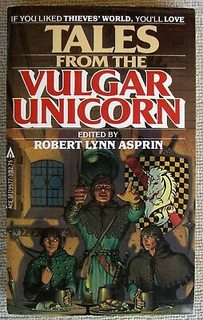 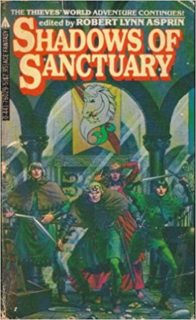 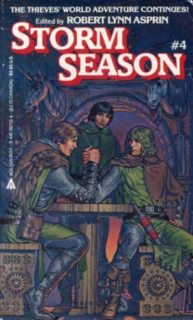 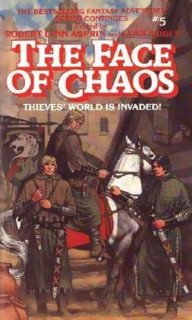 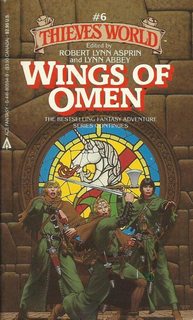 I believe that the characters are (from left to right on the original cover) Lythande, Hanse Shadowspawn, and (perhaps surprisingly) Prince Kadakithis.

Since the three of them are present right from the very first cover, they must be characters who appeared in the original Thieves' World anthology. And those three characters are naturally emblematic of the three different types of characters that appear in the earliest stories: the ruling class of outsiders (Kadakithis), the natives of Sanctuary slums (Shadowspawn), and those just passing through the city (Lythande).

I base this conclusion on some of the tie-in products that were released in the early days of the Thieves' World series. Starting after the second anthology came out, there were a number of role-playing-game products based in Thieves' World setting. (I remember these were not particularly popular gaming products; the seemd to show up in large stacks in every second-hand game store and hardly ever moved.) The first Chaosium RPG boxed set (which can be found here) used the same cover image as the original anthology. It included RPG game stats (for a a whole bunch of different games, including Advanced Dungeons & Dragons and numerous others) for many characters from the setting, and it several of the story authors contributed directly to the product. Future co-editor Lynn Abbey also evidently wrote much of the set's descriptive material. 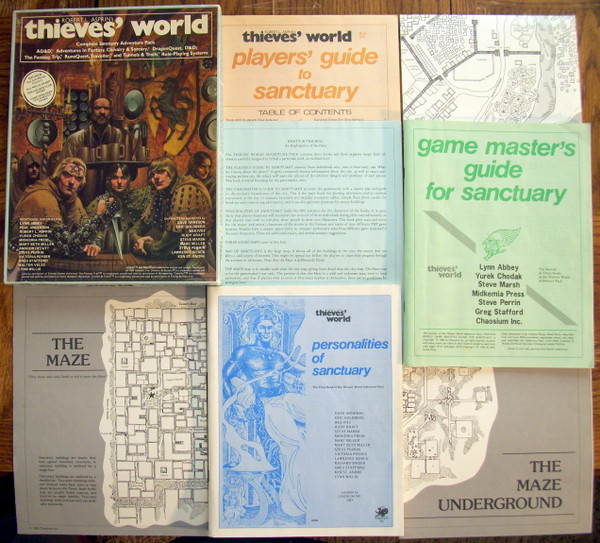 The same three characters appeared on the updated set, which covered books three through 6. 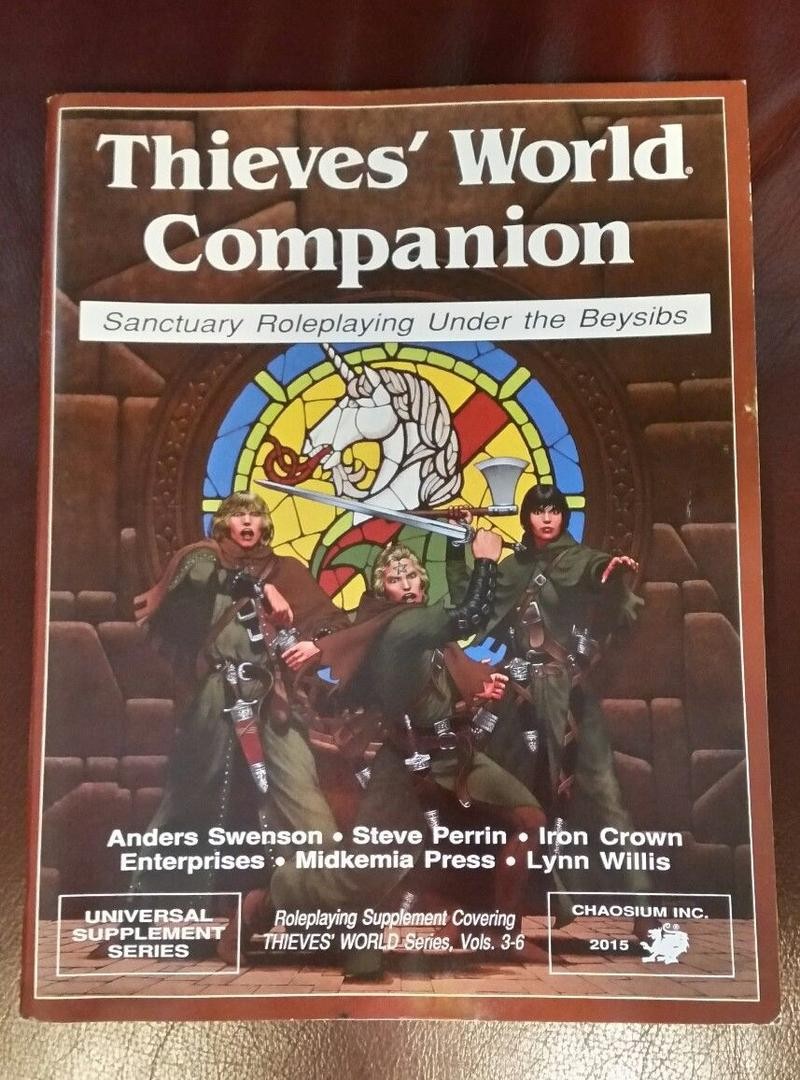 My answer is based only on material from the first set, since it covers the characters introduced in the first book. (There are actually listings of which major and minor characters appear in each story.) There are also descriptions and illustrations of many of the major characters, grouped into the three divisions types I described above. The illustrations for the three characters I identified seem to be the best fits for all of them. For the prince, in particular (since he seems like the least obvious of the three), there really just are not any other reasonably youthful, fair-haired male main characters who appear in the first book.

The capsule descriptions and illustrations for each of them are:

Prince Kadakithis, Imperial Governor of Sanctuary—is slim, in his late teens, idealistic and enthusiastic. He is also intelligent and has excellent awareness of why he is where he is. He is quite fair, when it is possible. The Prince was given the nickname Kittycat by those contemptuous of his diplomatic rather than tyrannical ways. His wife has sadistic tendencies, so he maintains several concubines as well. 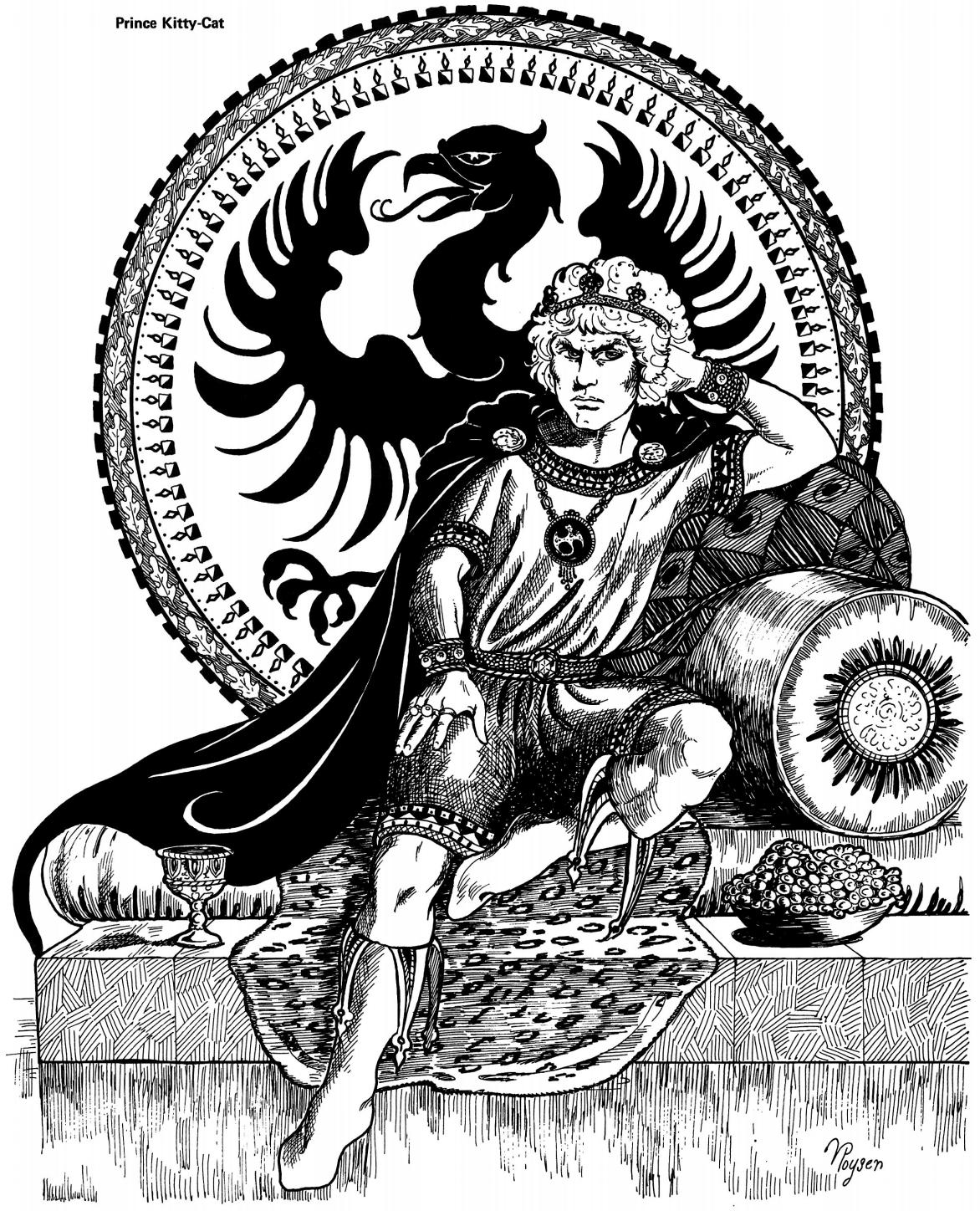 Hanse Shadowspawn—a young, superbly skillful thief, often seen in the Maze. He is of average height, is wiry and has dark hair and eyes. He always dresses in dark clothing and has a half-dozen or more weapons squirreled about his body. A master skulker and slitherer, he can rob from the most vigilant without being caught, but will not fight unless forced to.

Lythande—a tall, slender, grey-haired priest of the Sect of the Blue Star. She rarely uses her powers openly but is capable of any known magic through the use of the blue star tatooed [sic.] on her forehead. She must hide the fact that she is female, for if anyone discovers this fact, he power becomes theirs. She has sworn never to eat or drink in front of men and substitutes smoking tobacco, marijuana, or whatever else instead. 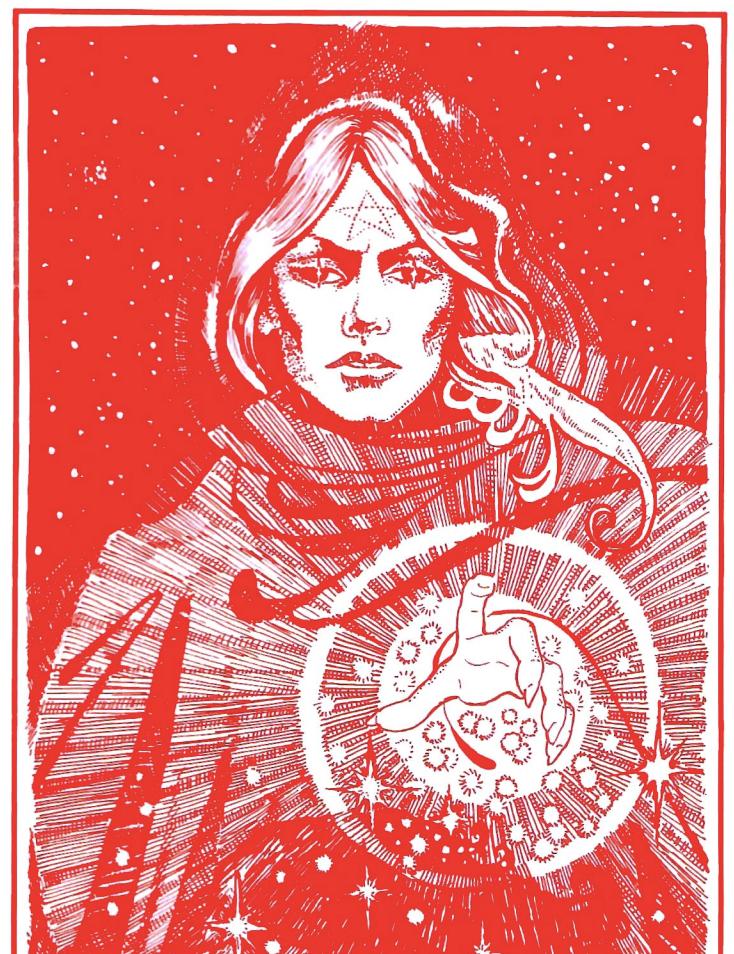 The one with black hair has to be Jarveena.

Not the answer you're looking for? Browse other questions tagged cover-art thieves-world or ask your own question.

3
Who created the cover art from the newer Wild Cards Book I with Jetboy on it?
8
Does anybody know which passages of A Storm Of Swords and A Feast For Crows are depicted in these illustration covers?
10
Why is the Shrike depicted with only two arms on the covers of the first three "Hyperion" novels?
7
Who are these people on the cover of Crossroads of Twilight?
7
Who are these people on the cover of Knife of Dreams?
1
What is the red animal depicted on this cover of "The Opal Deception"?
15
Who is in the middle of the Marvel's Avengers Vol. 3 #38 cover?
11
Who are all the characters from the UK book covers of The Witcher series?