I think I read this somewhere in the late 1980s to the early 1990s. My grandmother bought me the first book in the series, which was a fairly thin paperback, and I bought a later one (maybe the second one) on my own. It follows a young girl (maybe early teenage years) who gets a job babysitting a pair of kids from a monstrous family that's recently moved into town. I don't remember a ton of details, due to it being some time ago, but I remember there being a mother, a father, a boy, and a girl, the latter two being who she was baby-sitting. Unfortunately, I also don't remember a ton of what made them monstrous... the protagonist resolutely refused to believe there was anything paranormal about the family for some time. I remember that there was an incident where she was eating snack food with the children in the dark while watching a movie, and they claimed it was something exotic, but she believed it to be a joke, and that at some point one of the parents cured her headache by putting her head in a vice. She eventually accepts their monstrous nature, I think as part of the story where the townspeople were trying to run the family out of town.

I vaguely recall that the cover shows her sitting with the two kids, face illuminated as if they were in that scene with them watching a movie, not photorealistic artwork but also not cartoony. The later book I got involved a gag where she was working on something at school and told the kids that they needed "school spirit", which resulted in them getting a poltergeist for her. I don't think there were illustrations inside the book. 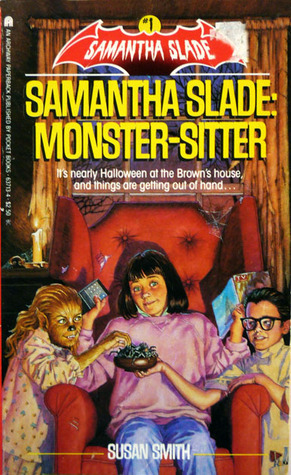 The blurb of the first book on Goodreads, Samantha Slade: Monster-Sitter is:

Are those real fangs in Little Lupi's mouth?

Samantha Slade isn't asking! For $6 an hour, she'd babysit for monsters! So what if Lupi's a little hairy and likes to growl at the full moon or if Drake consumes ketchup by the case and concocts evil-looking recipes at the stove. Who cares if the house is decorated with dead plants, spiderwebs and a shrunken head? After all, it's nearly Halloween. . .

Babysitting for the Browns is almost fun. . .until their pet bat trashes Mr. Deere's store. . .and the kids decide to take a hand in decorating the haunted house for the school's Halloween party. The girls have already bought the slime and the creepy crawlies . . .but nobody expected them to come alive. . .