How do Skrulls age?

Given Captain Marvel and the post-credits scene of Spider-Man: Far from Home we've observed

Therefore they haven't aged in 29 years (or 24 years if they were Blipped).

Are Skrulls long-lived? Or do they not appear to change as they age in their natural state, perhaps due to their shape-shifting capabilities? Or am I just an ignorant speciesist who can't tell the difference?

We don't have enough evidence to come up with a definitive answer on this but I would imagine that their life span is similar to that of a human. For an easy example look at Talos' daughter. 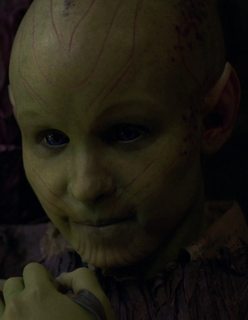 We see her in Captain Marvel which is set in 1995 yet we know she's been hiding on Mar-Vell's ship since at least 1989 because that is when Mar-Vell was assassinated by Yon-Rogg and she told them to hide there.

Soren: It's okay. We didn't know what to do. Mar-Vell warned us not to send a signal for any reason or the Kree would find us.

The girl would then have to be a bit older than that to account for being Soren getting pregnant and the girl being born. However, she doesn't appear to recognise Talos which would mean she was born when he'd already left meaning she can't be that old. This would mean she'd probably only be 6-8 years old and looking at her she appears to be a similar look to a human child of the same age. Therefore, they probably age at a similar rate to humans.

This is all assuming they've only been hiding out since around 1989 which we don't know for sure, if they've been there longer then obviously things change but I'm not aware of anything saying they were there longer than that.

Lastly, this does have real world precedent with people not appearing to age over time, I've met people like that through the years myself. For a couple of particularly relevant examples see Paul Rudd and Marisa Tomei. Paul is 50 years old yet if anything he looks younger than he did 15 years ago when filming Friends, it has even become a meme that he just doesn't age. Marisa herself is 54, 54!, despite not looking anywhere near that in any of the MCU films.

Not the answer you're looking for? Browse other questions tagged marvel marvel-cinematic-universe captain-marvel-2019 spider-man-far-from-home skrulls or ask your own question.

15
Why does Captain Marvel not age between the events of Captain Marvel and Avengers: Endgame?
14
Why do the Kree attack Skrulls in Captain Marvel?
7
Why were the Skrulls already in orbit around C-53?
8
Why does Yon-Rogg lie to Ronan about Skrulls being on Earth?
15
How did Monica know how to operate Carol's “designer”?
9
Why did the Skrulls try shooting Carol?
16
How long has Talos been on Earth impersonating this character?
9
Did Marvel/Disney explain why they chose to make Skrulls the good guys and Kree the bad guys?
18
How did Mysterio have these drones?