In this book the stars went black and the people on Earth took a while to figure out why. The solar system had been surrounded with a 'sheet' to stop human observation. It turns out human observation was causing collapses of quantum wave forms/relativistic possibilities in the universe, and the aliens didn't like that very much.

This is likely Greg Egan's Quarantine. Quoting from the Wikipedia summary:

The novel is set in the near future (2034–2080), after the solar system has been surrounded by an impenetrable shield known as the Bubble, presumably by an extraterrestrial civilization for unknown reasons. The Bubble permits no light to enter the solar system, and as a consequence the stars can no longer be seen, causing widespread societal panic, 'claustrophobia', and terrorist action. Neural mods are common place, designed pathways in the brain that are created with engineered, programmable microorganisms to produce a variety of effects, such as implanting skillsets, emotions, altered states of awareness or, illegally, forcing and controlling thoughts.

[...] one of the researchers responsible for the mod, Po-kwai, suspects that the Bubble may exist because humanity may have been aggressively collapsing the wave functions of alien civilizations that did not have the ability to do so, causing them harm. 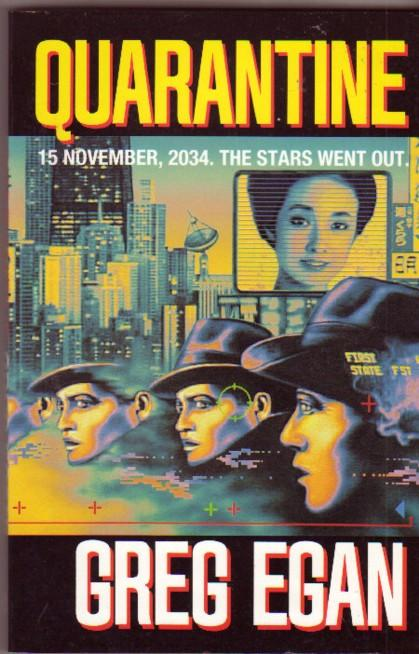 Not the answer you're looking for? Browse other questions tagged story-identification books astronomy quantum-physics or ask your own question.