I used to own a paperback of a science fiction novel; the third and final story of a trilogy. On the cover, a young adult couple were in an futuristic open-cockpit long automobile, speeding down a mod, windowless corridor. They seemed to be having a good time. Wild, perhaps, as if "life is just a party" (as Madonna Ciccone later sang). Words on the cover might have mentioned "endless Stalex corridors." Title of the book may have been purple ink. Sans serif. Clean, futuristic, modern font. Tilted title. Spacious, tubular corridor was light grey. Inside, there was a scene in which the woman was emotionally, verbally, and physically in charge. The male character was perhaps a bit overwhelmed. At one point the fictional woman was telling the fictional man something, while she was gripping his earlobes. This was a refreshing reversal of traditional female-male relationships. The lives of the couple seemed centered around traveling down endless corridors, possibly underground. Book may have been written in the late 1970s. The novel had a touch of comedy to it, and was almost certainly written by someone who knew the genre. Author was probably a man. I didn't read the entire novel. Cover artist was a seasoned professional; this was "transparent" clean illustration with no needless "busy" nonsense that calls attention to the illustrator. The ambience of the cover and cover copy (words) was consistent with the disco era and some NATIONAL LAMPOON pieces.

Multiface by Mark Adlard (Number 3 in the TCity series) looks like a possibility. 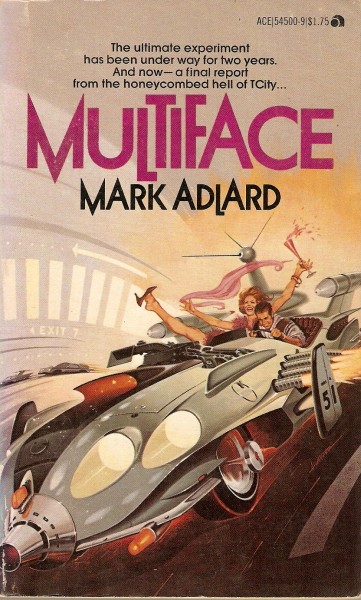 Down endless Stahlex corridors stream soulless remnants of our world. The Work Project has wrought massive change in the lives of TCity's drone-like citizens. As bees in a mammoth, man-made hive, the 'workers' have gained a sense of purpose... an illusion of meaning... And they pay a devastating price!

5
Identify science fiction book: Humor, loaded dice, blackmailing
9
Please help identify this pre-1994 space opera paperback (a sequel) with a “human bullet” and a catgirl
6
Science fiction novel about a drug that causes emotional/physical ecstasy by destroying memories
12
Book based on “Around the World in 80 Days”, with the main character travelling quickly around the world in a balloon
11
Seeking novel about aliens who conquer and occupy Earth and forbid technological progress
14
YA novel involving immortality via drowning
14
Science fiction novel about an assassin's guild that claims to be apolitical (while doing the local tyrant's dirty work)
4
About reincarnation “forever and a day” blue cover