Why does Hellboy file down his horns?

In Hellboy (2019) the titular part-demon files down his horns nearly flat as part of his daily routine. He even places such a high priority on this that, after assuming his apocalyptic form near the end of the movie, he breaks his horns off immediately.

Why is this? Certainly it doesn't help him blend in, since he has red skin, a tail, and so forth. It can't be hard for him to lift his head given his strength. While it's true that Hellboy's horns grow in his apocalyptic form, it doesn't seem like his horns make him evil, rather the other way around.

I'll answer based on the Hellboy comics. I don't know if the first two Hellboy films are regarded as canon, but I have never viewed them as such as they seem to have little connection to the comics. The 2019 film is very close to the comics, though sadly that didn't work out too well.

Anyhow it is a recurring theme in the comics, and especially in the sequel Hellboy in Hell, that Hellboy is destined to rule Hell and deliver all sorts of vaguely defined mayhem. He rejects this destiny, and snapping off his horns is a symbol of that rejection.

The first time we encounter the horn snapping is in Wake the Devil part 5 when Hecate specifically invokes his destiny and sends him down to Hell: 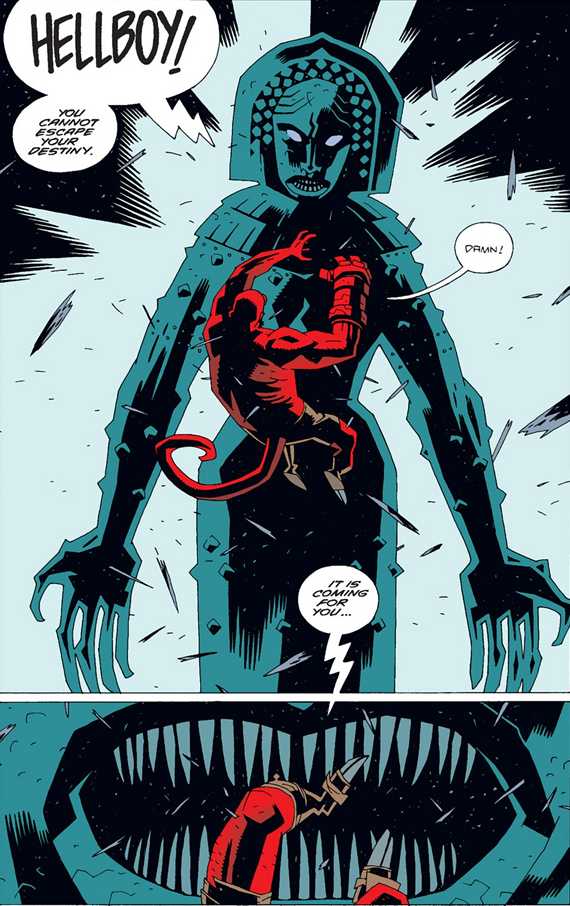 We see the horns grow as he descends in Hell to take up his destiny: 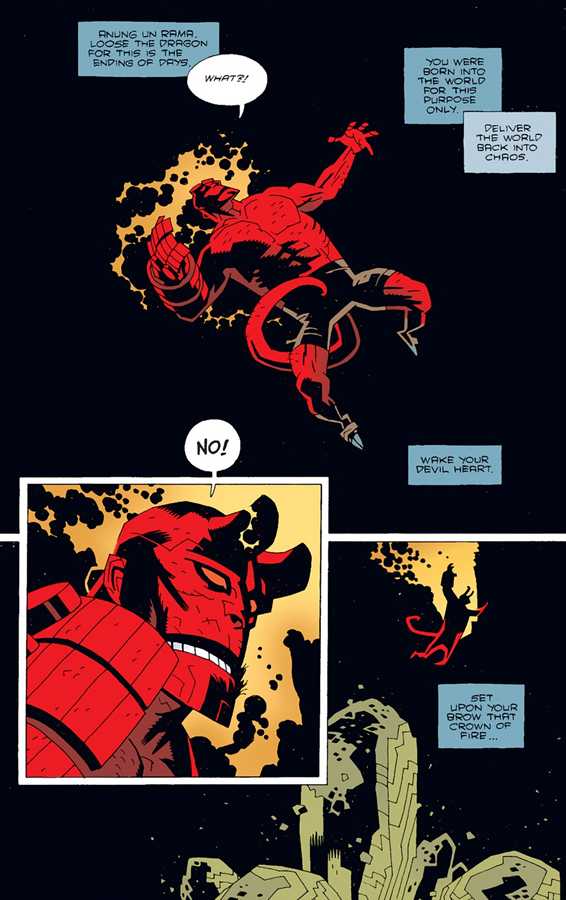 And he explicitly rejects that destiny and snaps off the horns as a symbol of that rejection: 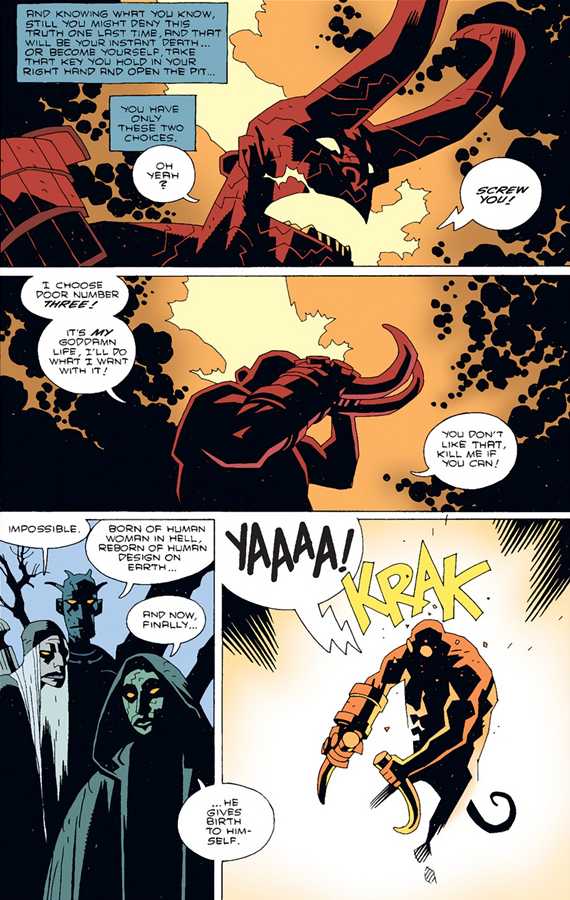 This theme recurs again and again in the comics. I'm not going to post scans of every occasion otherwise this would be a long answer, to say nothing of the copyright issue, but it's the overarching theme of the comics that Hellboy was born of a mortal woman and the archdemon, Azzael, and is destined to rule Hell. This comes to fruition in the final episode of Hellboy in Hell, though I won't say how for fear of spoilers :-)

In the 2019 film Hellboy snaps off his horns to reject Nimue's attempts to persuade him to take up his destiny. This doesn't happen in the comics because the battle with Nimue ends rather differently, but again I won't give spoilers.

So the bottom line is that Hellboy snaps his horns as a symbol of his desire to live a normal life as a mortal among humans. I don't think we ever see Hellboy filing his horns in the comic. Whenever he snaps the horns they leave a smooth surface, and I don't recall any suggestion in the comics that the horns grow naturally like hair or nails do.

This was lampshaded addressed in Hellboy (2004).

CLAY: His horns. He files them. To fit in.

John Rennie's answer does an excellent job explaining the symbolic meaning behind Hellboy breaking his horns off in dramatic moments. However, B.P.R.D. 1948 explains the origin of him mundanely filing them off.

Archie, one of young Hellboy's carers and friends, laughs when Hellboy tries on his hat. Hellboy is going through an emotionally difficult time as his adopted father is away on an extended mission. He locks himself away for over a day. Another of his carers/friends speculates that he's reacting to the difficult conditions of his childhood and discomfort with being "special." He took it extremely personally when, Archie, one of his only friends, laughed at his appearance, at least from his perspective. The story ends with a strong implication that this shame and a desire to be normal is what leads him to start filing his horns. 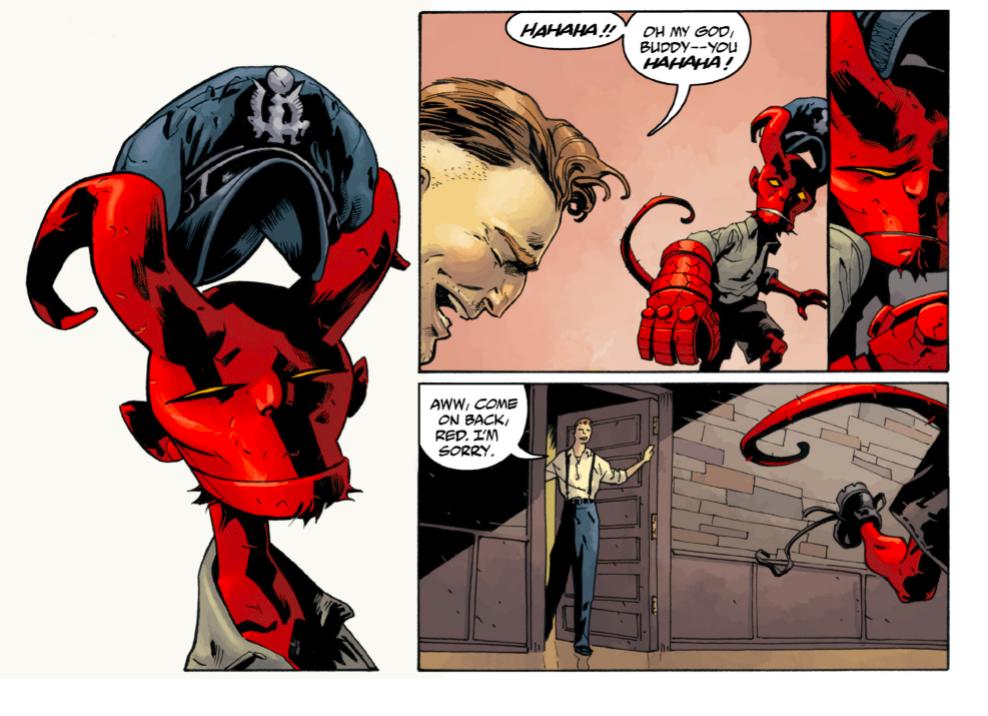 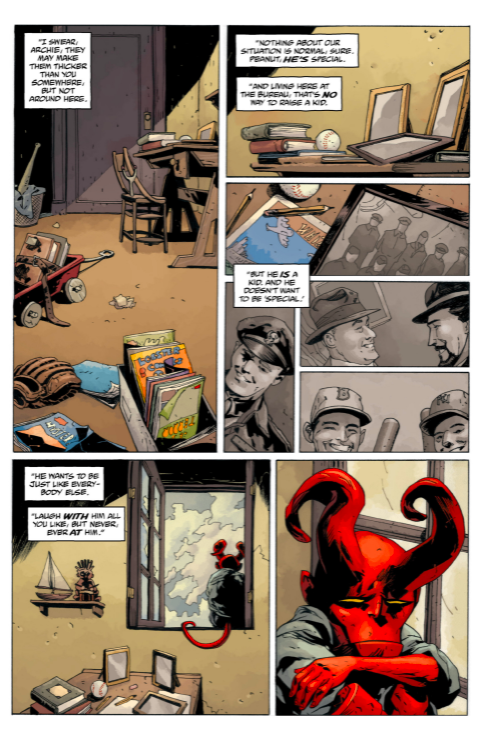 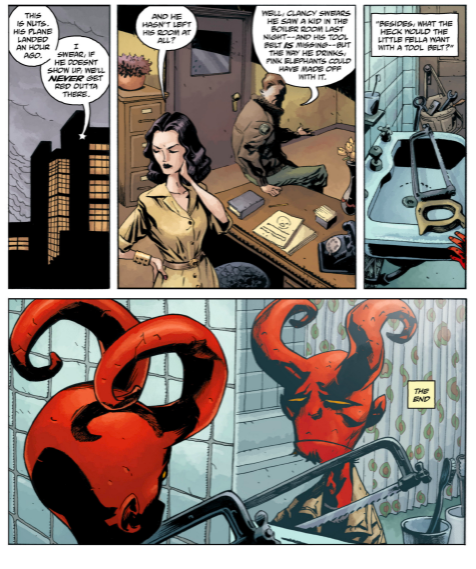 The question asks why he bothers when he still has other demonic features that he can't change. This origin answers those questions by explaining that

11
Why does Hellboy have an oversized arm made of stone?
6
Why doesn't Hellboy's Rasputin get his eyes back?
11
How does Hellboy put his coat on over the Right Hand of Doom?