Watched this a while ago when I was a child. I think it was on Netflix at the time, but am not certain. I remember the main plot of the series was about a boy who draws a picture of a wolf/tiger mix, and then gets sucked into an alternate world. There, they have these runes, gems, or some sort of stone to summon monsters to fight. I also remember there being a desert episode where they run out of water. I think they try to get the most powerful runes from some sort of guardians perhaps? It was along the lines of "monster", "mon" or something. It has been driving me crazy trying to find it!

Was probably in the 2009 to 2012 era if I had to guess. Definitely not Monster Rancher, as the wolf looks way different. I remember they had to fight the main antagonist to gain the runes/stones, and I also remember that one of the later episodes was when they went into one of the runes to find the last Guardian. That is about all I can remember.

The protagonist had a grandfather who was relevant to some extent, but I cannot remember what.

Another thing I remember were these cloud whale things that would fly around, and one of the guardian monsters being a giant bat I believe.

Is it possible you were watching Yu-Gi-Oh! Capsule Monsters?

Yugi Muto (romanized as Yugi Mutou in the English-language manga) wakes up after having a strange recurring nightmares about the Pharaoh being captured by an evil monster with glowing red eyes and telling him that why he is having these dreams will become clear when he "plays the game". This time, the Millennium Puzzle starts glowing in response to the dream, bewildering Yugi even further.

Before leaving for school that day, Yugi noticed that his grandfather, Solomon Muto (Sugoroku Mutou in the Japanese versions and English-language manga), had not returned from his "secret expedition" (Yugi was told at the last minute) as his flight was due last night. Yugi is worried about the fact that Solomon is missing.

Meanwhile, there is a new game on the block; the Capsule Monsters board game is the new fad in the Duel Monsters craze, and Yugi has already taken the opportunity to learn the rules of the game. When Joey Wheeler (Jonouchi Katsuya) breaks the news about the trip, Yugi and his friends could not contain their excitement. Yugi, Tristan Taylor (Hiroto Honda), and Téa Gardner (Anzu Mazaki) agree to take Joey's other three tickets.

They find themselves in a forest, with Joey nowhere to be seen. Yugi notices a lot of egg-shaped rocks around, but before they can investigate, some giant cockroaches (Gokibore, a monster from the Volume 6 expansion set) and a giant praying mantis (Kamakiriman, from Volume 3) ambush them. The escapes of Yugi, Tristan, and Téa causes them to have to split up.

There is a desert episode, "Eye of the Storm":

They arrive in a desert and find a village, where they are given a pendant and the instructions for the first trial: "Silence the whisper that rides the desert wind". While Solomon stays a safe distance from everyone else, they call forth their monsters and destroy a Medusa Worm, which they initially believed to be the enemy. However, it turns out to be one of many Medusa Worms under the voice's control. Everyone but the Pharaoh is spat on by a worm and is turning to stone. Dark Magician takes the Pharaoh above the storm and the voice sent to confuse them to show him a tornado causing it. The Pharaoh calls Dark Magician back to his capsule and proceeds on foot to reach the voice. However, he isn't strong enough to reach the tornado. He then sees a man wearing a cape and mask, telling him to merge with the Dark Magician to gain the strength needed to pass the trial. Doing so, the Pharaoh becomes the Dark Warrior and flies into the tornado to find the voice is Mystical Sand. Silencing her, the Pharaoh clears the trial and reverses the Medusa Worms' petrification on his friends. The armor takes a toll on the Pharaoh as he is not used to it yet. Yugi takes his place to relieve some of the pain and tells of the man he saw explaining how to use the armor. One of the five shapes on the pendant lights up to signify the victory over this trial, and a doorway comes out of the sand.

Found with a search for anime "on netflix" summon monsters grandfather

Kaijudo - was looking for it also. They all wear a glove and pull the monsters through portals, of its the same thing I'm thinking of.

Kaijudo is likely the cartoon you're looking for. 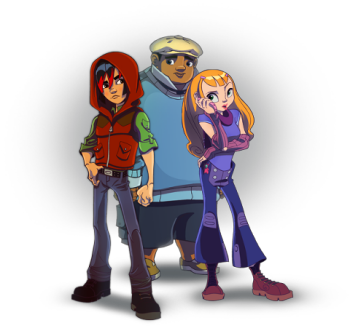 Borrowing from Adam's answer, since I feel like adding all of the details would be a bit disruptive of an edit. Adam can feel free to grab some or all of this answer.

Our hero is fourteen year-old Raiden 'Ray' Pierce-Okamoto, who, along with his mom and grandpa, has just moved into a new apartment. Somewhat introspective and often bullied for his mixed heritage, he often longs for something more, as if he knows there's another whole world out there. This leads him to be on the "dreamy" side.

On his way home from school with his best friends, Allison 'Allie' Underhill and Gabriel 'Gabe' Wallace, his encounter with some bullies leads him to summon forth a Rumbling Terrasuar like the one he sketched the previous night from out of nowhere just by calling its name that he didn't even know. One thing leads to another, and the group ends up meeting a mysterious young man named Hector Chavez who then proceeds to rescue them by taking them on a short trip to the dangerous Kaiju Realm. This, of course, leads to the kids being shocked and upset when they get out. Chavez decides that the best way to explain would be to invite the kids to where he works, The Temple of the Kaijudo Duel Masters, of which he is one of those Masters.

Here's a clip that shows him summoning the Rumbling Terrasuar from his drawing:

And, in case that link goes bad, here's the opening sequence:

Dupe of Cartoon TV Show About Three Kids and Monsters and a "veil" between realms among others.

So I just found a similar question: netflix-2009-2012-animated-tv-show-about-a-guy-who-uses-runes-to-summon-creature. The question sounds pretty similar, and the answer that is provided is Magi-Nation (2007). The answer on that page goes into much more detail. 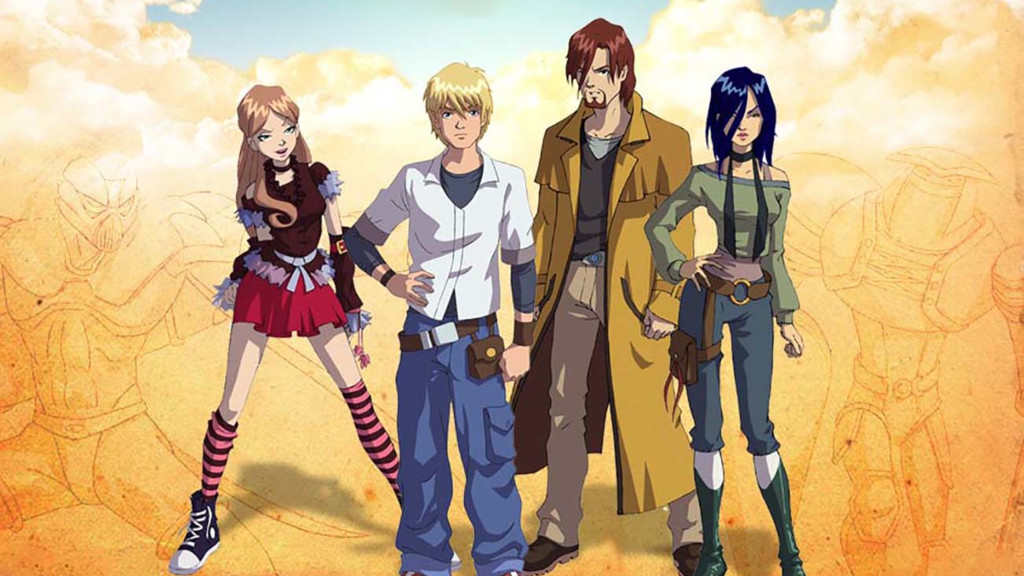 BamBoiBamBoi
1
2
Add a comment  |
Highly active question. Earn 10 reputation (not counting the association bonus) in order to answer this question. The reputation requirement helps protect this question from spam and non-answer activity.

10
Anime with a boy hiring a creature from a stone, meets a man named Dante and starts a journey to collect crystals
7
Cartoon TV Show About Three Kids and Monsters and a "veil" between realms
3
Netflix 2009-2012 animated TV show about a guy who uses runes to summon creatures in another world

5
Show that I watched on Cartoon Network, about teenagers who could transform to monsters
4
Cartoon about a boy and his friends capturing monsters
3
Anime where the MC has a ring of light on his chest and monsters can look like people
5
Anime where people summon monsters using gun-like devices that carve patterns in the air
3
Anime movie/series about school students that go to another world with rocky territory, they fight square monsters
5
Pokémon-like movie where the characters fuse with their monsters. The plot includes a school trip to a museum and an Asian baby that was a king