Pre-1968 YA science fiction novel: robot with black-and-white vision, later the robot could see in color

A science fiction novel, written before 1968, featured a robot with black-and-white vision. Perhaps halfway through the novel, the robot receives an upgrade, and could see in color for the first time. 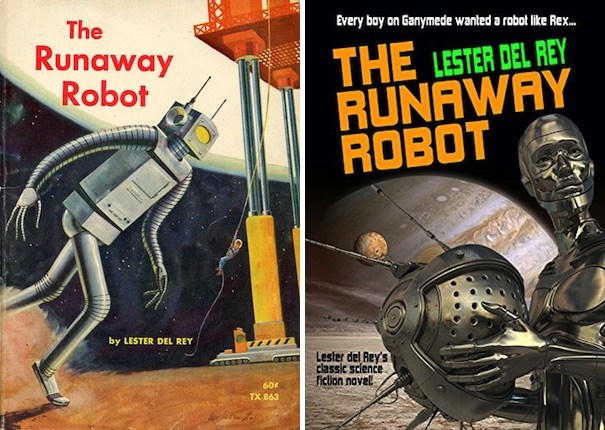 The cover on the left is an accurate portrayal of Rex the robot, the point-of-view character, according to Rex's description of himself:

I have no nose or mouth, and only one eye, you might say -- the refractor bulb in the middle of my control box

Early on, Rex muses about his sense of vision:

[Paul] says that I have the capacity only for black and white, and that someday he'll get me a color refractor bulb. Then I'll see color.

Rex receives this upgrade midway through the novel:

"Your refractor bulb is for black and white?"

He scratched his chin. "Wait a minute. I think maybe I've got something for you. There's an old box of spare parts in my cabin -- "

He went away, and when he came back he had a refractor bulb in his hand. "Don't know where I picked this thing up. It's been around for a long time. Maybe it won't work."

Then I had one of the most exciting moments of my life -- when he took my old tube out and put the other one in.

I haven't got the words to describe how I felt. It was like seeing a new world even there in his dingy cabin.

He squinted at me and grinned, and I could see that he was pleased. "I guess it would be. That's color you're seeing. My shirt's blue. The paint on that chair is red. Not too bright. You'll see lots brighter colors than that."

You may also remember...

There is a scene where Rex is alone and almost out of power. He describes the danger he faces in replacing his batteries by himself:

Changing my own batteries was tricky, but I could do it. What I had to avoid was disconnecting the old ones, even for a second, before I got the new ones connected. If I did that, I would go unconscious and freeze. Then I would have to wait for a human to connect me up again.

Rex has a broad range of humanlike emotions, including embarrassment:

"Yes, sir," I said obediently and went out into the shed and lined up with the rest of the robots. I felt naked standing there as the two overseers checked the other robots over -- naked because they had taken my pants away from me.

It probably sounds silly to you -- a robot embarrassed without his pants. But domestic robots are given pants and aprons so that they can have pockets to carry small objects, and the first thing Mr. Hennings had said was that a farm robot wearing pants was ridiculous and he made me take mine off.

You can borrow the e-book from the Open Library.

Not the answer you're looking for? Browse other questions tagged story-identification novel young-adult robots or ask your own question.

15
Science fiction novel about an assassin's guild that claims to be apolitical (while doing the local tyrant's dirty work)
6
Graphic novel with pink and white cover, printed in black and white, about a female lead living in a space station, joining a military group/the army
9
Young adult science fiction novel where a planet orbits a violet sun which gives the planet's inhabitants strange powers
10
Pre-70s history of the future citing science-fiction authors as historical sources