Was Willow's first magic display (blazing arrow through arm) actual magic, and if not, what's the trick?

At the beginning of Willow, before the wizard chooses his apprentice for the year, Willow participates in a Nelwyn fair where he demonstrates two magic tricks:

The piglet's disappearance is quickly shown to be some sleight-of-hand trick (the piglet was under the stage), which implies the arrow thing was a setup as well.

However, throughout the movie, it seems Willow already has a bit of experience with magic. Sure, he's not really good at it, (transforming Fin Raziel into a crow instead of her human shape, etc.) but the impression I had, through him uttering the words and all, was that Willow had actually practiced some magic already.

Thus, I'm curious whether the fire arrow trick may have been actual magic? It could still be a trick, but in this case I'm wondering what the trick is. The cylinder doesn't look wide enough for Willow to push his arm to the side and have the arrow going besides it, and anyway he would have been burned.

Googling terms like willow nelwyn magic trick explained or magic trick fire arrow through arm don't seem to bring up anything relevant, except a "stage magic" wikia page which doesn't say much more than "illusions."

Is there an answer as to how Willow seemingly managed to push a blazing arrow through his arm? I've only seen the movie, not read any novels; perhaps there is an answer there.

The film's official novelisation confirms that Willow performed a variety of "tricks" (i.e. not magic) before the piglet illusion.

But Willow had his own cheering-section, and they were so enthusiastic that they even drew some curious spectators away from the tug-of-war. Willow’s boyhood friend, Meegosh. stood solidly in his leather miner’s apron, one arm around Ranon and the other around Mims. All three wildly applauded every trick, even the old pull-the-feathers-out-of-nowhere maneuver, which Willow actually did quite well. Meegosh slapped his apron and yelled, “Bravo! Bravo!” so lustily that he attracted the attention of Burglekutt. The Prefect watched disdainfully from across the fairgrounds, pudgy hands spread on his stomach.

As to how it was performed, it's typically done by having the arm simply be out of the way of the candle. The holes (in this case knotholes) are placed in such a way that they look like they're opposite, but in reality they're slightly offset, leaving enough space for the arm. You can see the illusion performed here 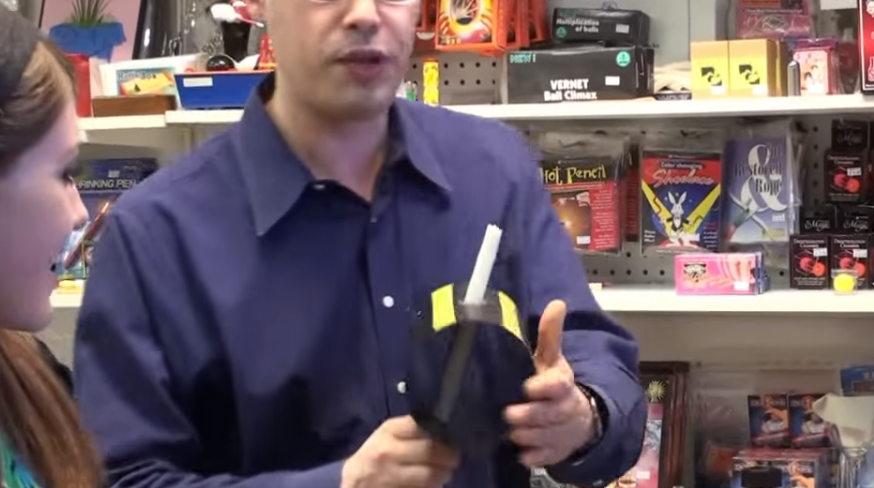 It appears to be based directly on this trick. Thus I assume it is meant to be sleight of hand like the piglet trick.