Where was it established that Super Goof's goobers were irradiated by a meteor?

In old comics from the 1960s and later, Goofy used to have a superhero alter ego, Super Goof. Toonopedia explains that Disney made a trial run in Donald Duck #102 (October, 1965) where Gyro Gearloose invented a super cape that Goofy used. The character was well received and

That same month, he got his own title, and Super Goof #1 (also by Connell and Murry) provided yet another origin story. This one involved a goober patch in Goofy's back yard, which, irradiated by a nearby meteorite, yielded super goobers which powered him up when ingested.

I am a bit confused about the line about the goobers connection to a meteor. It has been referenced in many places, it even showed up in an episode of Disney's House of Mouse. It is well known that Goofy got his powers from peanuts, or goobers as he calls them, but there does not seem to be any reliable source that show where in comic they attribute it to a meteor?

The first number of the comic Super Goof #1 (1965) says nothing about it, it only mention that Goofy managed to grow the goobers in his garden, but no mention about why they were so special.

Much later, in Super Goof #31(1974) the goobers were destroyed by the Beagle Boys which forced Goofy to get replacements. His research of the origin of the peanuts leads him to a Mexican superhero called Super Señor who had "superior goobers" on his ranch and who provided Goofy with new ones. 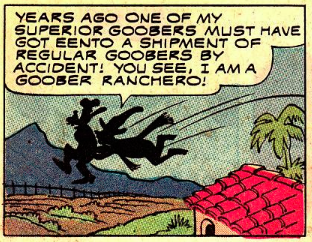 That is all the origin there seems to be for the goobers, so where does the meteor come in? Could anyone bring clarity to this?

I do not recall encountering an references to radiation from a meteor being responsible for Goofy's Super Goobers. However, in Super Goof issue seven, Gyro Gearloose demonstrates that he can create new Super Goobers using just his "atomic greenhouse," so nuclear radiation does appear to be the culprit. (Goofy does not provide Gyro with a Super Goober to work from; he just tells him what is needed in a letter.) 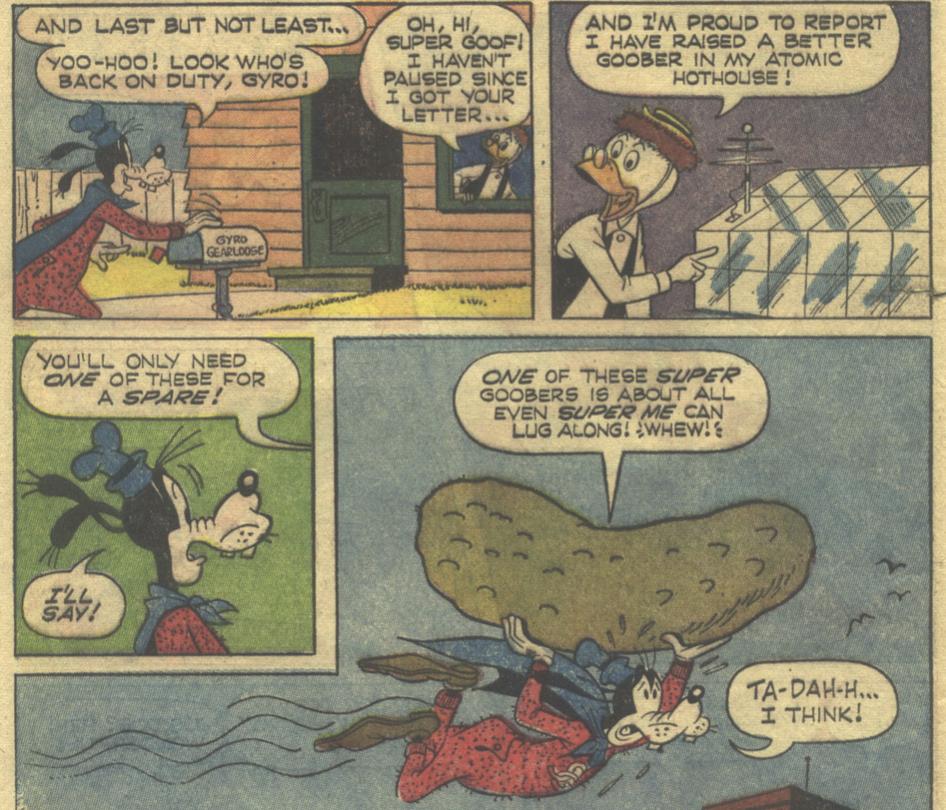 Not the answer you're looking for? Browse other questions tagged comics disney or ask your own question.

4
Was Michael Van Patrick super powered?
8
Which comic book super villain was the first to match wits against a different super hero?
10
Who was the first “Super Hero” without any super powers to be published in the comics or newspapers?
29
Who was the first super hero with super-speed powers in comics?
34
Identify a comic where Scrooge McDuck was protected against a beam because he went swimming in his money
4
Can Parademons retain the original being's abilities?
7
Comic character from the 90s who resembled Spawn
8
Comic where Scrooge McDuck or Donald Duck is facing a chess player that never loses
10
Looking for the comic book where Spider-Man was [mistakenly] addressed as Super-Man