2010s(?) cartoon: three teens have the power to control monsters to fight other monsters

I watched this a long time ago probably in 2010s either on Cartoon Network or Boomerang. It was about 3 teens having to fight other monsters, 2 guys and 1 girl.

Now I don't remember much, but the most dominant feature about this cartoon is that every time they're going to encounter a battle, the time stops and it's pretty hard to forget that feature because of course, they fought in every episode.

I hope this might find it useful but I remember one of the monsters that they fought is about a centipede look-alike and it was a robot too, it would attack by digging itself into the ground and jumping out.

Things that i remember recently:

I suspect you're thinking of Bakugan Battle Brawlers, which ran on Cartoon Network around 2007-2008.

Dan Kuso's life changed one day when cards fell out of the sky and grabbed one, which he and his friend Shun used to invent a game called Bakugan. With other friends, they form a group called the Bakugan Battle Brawlers, and then are accidentally dragged into fighting for the fate of Vestroia (the Bakugan's home dimension).

Vestroia loses its natural balance and merges with the Earth and many other worlds. An evil Bakugan called Naga was tempted to take the power of the Infinity and Silent Cores, which formed the Perfect Core that balanced Vestroia, but absorbed too much negative energy and thus was trapped within the Silent Core and destabilised Vestroia. So Dan and the brawlers decided to bring back balance by meeting new friends and allies in the other worlds, learn more about the origin of the Bakugan; and facing Naga, a rogue bakugan who seeks the mighty Infinity Core so that he could complete the all-powerful Perfect Core and have almighty power and absolute control over Earth and Vestroia.

As you can see a bit more than four minutes into the first episode, time does stop when their battle begins. The mechanical centipede would be Centipoid. 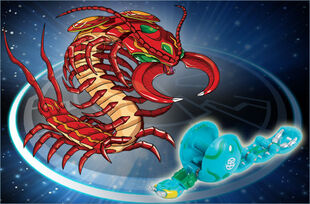 I found this by searching for cartoon network fight robot centipede. Seeing Bakugan show up a few times, I looked for the first episode, which confirmed time standing still.

This sounds a lot like Digimon, specifically Digimon Fusion, which ran from 2010-2012. I couldn't find too many clips of it online but from what I remember it lines up with your description fairly well.

The three main characters control their own Digimon and fight against the evil Digimon (generalization of the plot, but you get the point).

I couldn't find any clips of time stopping or a battle with a centipede, but as I said, I couldn't find too many clips in general so I'm going off of memory and what I found on Wikipedia for the most part.

They also definitely did battle every episode, and I'm fairly sure it aired on CN.

5
Show that I watched on Cartoon Network, about teenagers who could transform to monsters
4
Looking for old sci-fi cartoon
7
Cartoon series with teens and adults summoning monsters, involved five temples in Atlantis
7
Cartoon TV Show About Three Kids and Monsters and a “veil” between realms
3
Cartoon show in which two college students fought monsters
3
90s sci-fi series with an episode where a boy goes into VR and fights a Medusa-like monster
2
Cartoon where 4 elemental children fight big monsters but have to press a symbol