What is this green alien supposed to be on the American covers of the "Hitchhiker's Guide to the Galaxy"?

I have the 2017 Del Rey Books mass market edition of The Hitchhiker's Guide to the Galaxy. Here is the front cover: 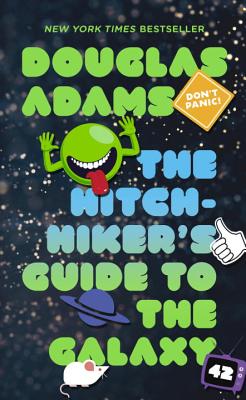 It features a circular green alien with two arms sticking its tongue out. Looking at other covers, the first American edition also has this character: 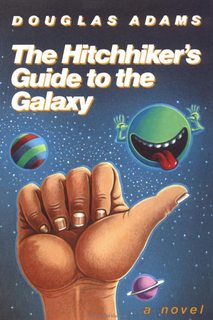 Who is this supposed to be? I have no clue.

Apparently it's called "The Cosmic Cutie".

This question was also asked on reddit, which links to this FAQ.

According to Douglas, the little green blobby planet thing (nickamed the "Cosmic Cutie") has been struck the final blow, and will not be featured on any of the new (American) HHG books. Here's what Adams had to say:

"I HATE the little green blob and have spent years locked in arguments with my publishers with me trying to get rid of the obscene little thing. I've finally secured its demise with the new Ballantine editons of the soft cover backlist."

Non-American readers are perhaps unaware of this book adornment, as it was only the American publishing houses that determined that without a consistent motif, all of us Yanks would become hopelessly confused by a series of books with different names.

It's also mentioned on a Wikipedia talk page. It's mentioned on Topless Robot, which does not provide a source, and The Geek Twins, which in turn links to this FAQ (thanks DavidW).

Somebody asked Douglas Adams about that green blob thing at a 1997 or 1998 reading I attended. The question (asked by a preteen kid) got a round of applause before the author even had a chance to answer. Adams immediately got very animated and said, "I have no idea!" He explained that he "hate[d] the bloody thing," had no idea why anybody had put it on the covers to begin with, and had fought (successfully) to keep it off the cover of the omnibus edition of the Hitchhiker's Guide to the Galaxy series.

I was fortunate to have a chance one-on-one conversation with Douglas Adams, sometime around 1982. (In a bookstore called "A Change of Hobbit," in Santa Monica, California.)

When I asked him the same question, and his answer then was that he had no idea what it meant, and that he had never seen the cover art before it was published.

This was about a year after the film Heavy Metal was released, and it featured an evil glowing green orb as a character. I asked if perhaps that inspired the the green thing on the cover. He averred that it was possible, but he really didn't know.

I always thought it was a Zero. If you watch the far superior BBC adaption of HHGttG when it gets to the bit about the population of the Galaxy, being Zero, and the chance encounters you would make to counter such arguments. Would be the sum product of a deranged imagination. A bunch of these raspberry blowing Zeros would just start popping in and out.

But, then it's probably some meaningless coincidence, brought on by some random event somewhere in the deeper universe.

Not the answer you're looking for? Browse other questions tagged character-identification the-hitchhikers-guide-to-the-galaxy or ask your own question.