heat wave type of movie or made for tv movie

years ago, not sure when, 80's 90's? About a family from the usa who is trying to get into Canada (because of the temperature increasing in the USA) over a bridge, the father gets in but suddenly the border gets shut and the family can't get in? The family (without dad?, I think)then goes on this journey of sorts including a brief stop in a city where everyone wears white and there is water and it's cool but they have to abide by certain weird rules. As they are traveling they are like vagabonds on backs of trucks etc. I know this is vague but does anyone remember?

This may be the mini-series, The Fire Next Time. 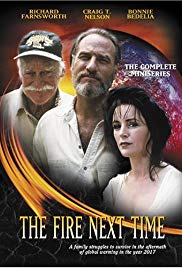 The Fire Next Time is a 1993 American television disaster miniseries directed by Tom McLoughlin and written and produced by James S. Henerson which stars Craig T. Nelson, Bonnie Bedelia, Richard Farnsworth and Justin Whalin. Set in 2017, the plot focuses on a family who, after a series of fires begins to break out due to global warming, must struggle to survive a natural disaster that devastates the earth.

This movie is fair in acting and plot, but for 1993 it did take some good thinking to predict what natural disasters would be hitting the US in the next 20 years. I enjoy watching my old tape because of this, even if the movie is mediocre. Here are some of the more interesting plot lines: The year is 2005, and the plot follows a family on the gulf coast, before and after the aftermath of a category 5 hurricane. Previous to the hurricane, it is evident that there is a gas crisis, and fuel prices are so high that rationing has become the norm. There is some very interesting dialog between townsfolk and officials that claim the levees are up to par when the townsfolk know they are not. Needless to say the hurricane devastates the region. The family is forced to migrate north, and in the midst of this the father has to travel to California to find his son who is staying with the uncle. In California, water shortages are everywhere, and over 300 hundred fires are ravaging the state (which is happening now in northern Ca and last year happened with less fires in the southern Ca). The boy and his father have a falling out which leads the boy out to the southwest into water feuds and the immigration problems from Mexico. The mighty Colorado has dried up to a stream because of the over-contracting of water supplies to southern California. The plot then changes to more socio-political aspects of a non growth "green" town in New York state, and how the family will get across the border to Canada because the problems of the US has led them to close the borders much as we have between the US and Mexico.