Short story about a ghost, possibly written in the 1960s by a woman

I am a librarian hoping to help a patron. The patron believes this science fiction/fantasy story was written in the 1960s by a housewife with four kids. The story might possibly be titled "Girl in a Blue Dress" and concerns a ghost, losing an overcoat or sweater, and being unable to cross water. We have eliminated Shirley Jackson, Jack Finney, and Ray Bradbury.

Your patron might be thinking of In a Blue Velvet Dress, ostensibly by a lady named "Catherine Sefton," although that was actually a pen name of Martin Waddell.

Here's a cover-scan of the first edition. Looking at it might ring a bell in your patron's head. (Or not, as the case may be.) 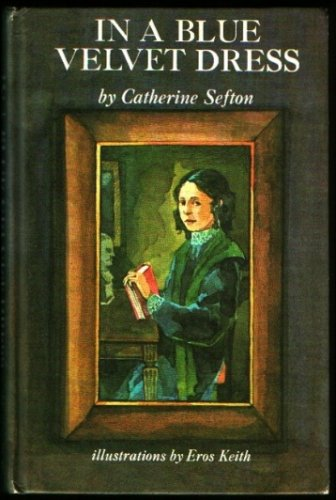 And here's a summary from Kirkus Review:

The bookless house at 3 Mole Street seems to promise a dull holiday for avid reader Jane Reid who's been left behind while her parents cross the Irish Sea for a vacation in Scotland. But an obliging girl ghost thoughtfully provides Jane with new reading material every night -- bound volumes of the Girl's Own Paper, E. Nesbit's Five Children and It, and other favorites of a bygone generation. Jane eventually discovers that the ghost is actually Mary Quinton, a fellow bookworm who pined away and died in the very same house after being orphaned at age 13, but Mary evaporates after the return of Jane's father with a suitcase full of Jane's own books. Slight, wistfully sentimental bedtime reading for girls like Jane who won't demand more than a shade of a story.

But I'm not sure that this is what you and your patron are looking for. Let me list a few points to consider -- some of them encouraging; others not so much.

A note: In case your library doesn't have a copy gathering dust on the shelves, I discovered that In a Blue Velvet Dress is available for people to "borrow" (digitally speaking) and read for free on https://OpenLibrary.org -- so looking at the actual text would probably be the best way for your patron to determine whether anything about this book seemed suspiciously familiar.