Why would word of Princess Leia's capture generate sympathy for the Rebellion in the Senate?

If no one knows Leia is part of the Rebellion, how could it generate sympathy for the Rebellion in the Senate?

If it is already known that Leia is part of the Rebellion, why would anyone in the Senate (a government body tasked with, among other things, preserving order in the Galaxy) want to support the Rebellion (a group violently subverting established order)?

The relevant dialog from the script is:

LEIA: I don't know what you're talking about. I'm a member of the Imperial Senate on a diplomatic mission to Alderaan...

VADER: You're a part of the Rebel Alliance... and a traitor. Take her away!

Leia is marched away down the hallway and into the smoldering hole blasted in the side of the ship. An Imperial Commander turns to Vader.

COMMANDER: Holding her is dangerous. If word of this gets out, it could generate sympathy for the Rebellion in the senate.

This is not directly addressed in either Lucas's script or the novelization ghostwritten by Alan Dean Foster. However, my inference has always been that Leia is, as a Senator, a well known opponent of Imperial excesses of violence and tyranny. (The prologue of the novel does begin with a quote from Leia: "They were in the wrong place at the wrong time. Naturally they became heroes," which seems to be referring to the enemies of Imperial tyranny.) 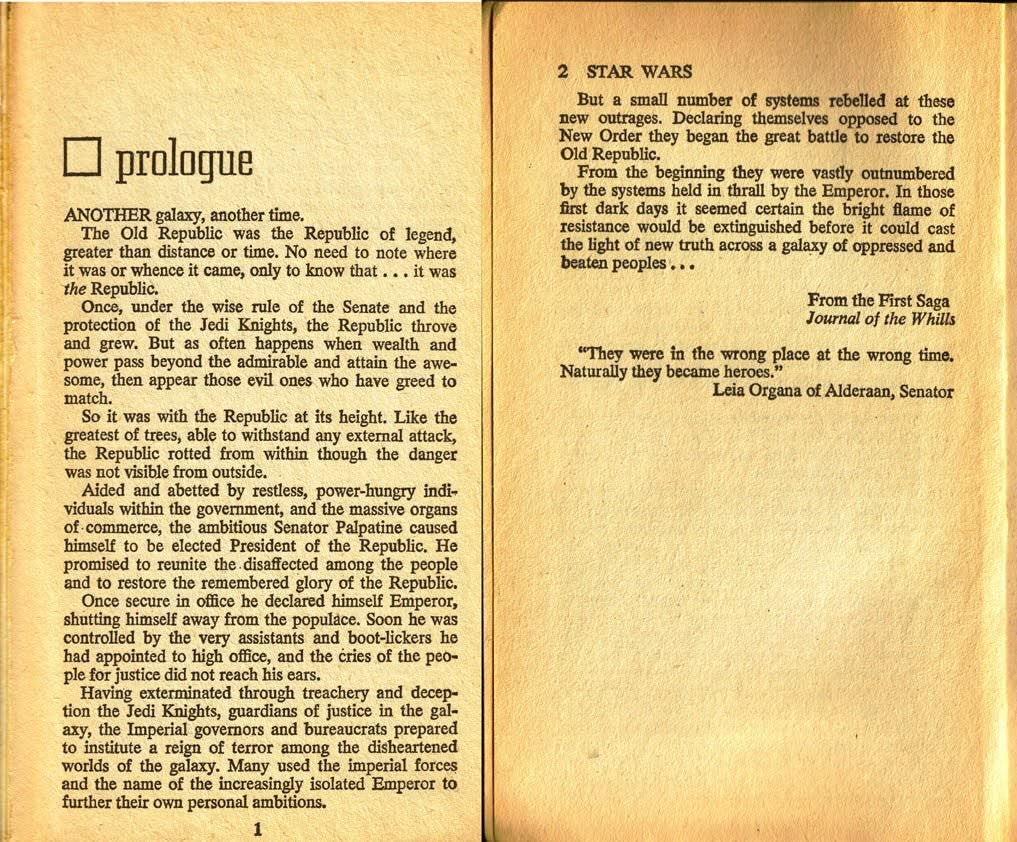 The Empire is only about two decades old as the movie begins, and it is still not considered commonplace for a military vessel to attack a civilian one without provocation.* The citizens of the galaxy are still largely accustomed to the freedoms that they enjoyed under the Old Republic, but it is clear that incidents like Vader's capture of Leia's vessel are becoming an unpleasant reality; from Leia's, "Darth Vader. Only you could be so bold," it is also clear that Vader himself is a major instigator of such incidents.

The Senate is evidently not controlled by the Emperor. Planets like Alderaan are still able to select their own representatives, and many of those senators are evidently sympathetic to the Rebel Alliance. The rebels could naturally be seen as fighting against the excesses of the new Empire, and the duly elected representatives of the various planets would have a natural reasons to find common cause with the rebels. Even members of the Imperial Senate who may disagree with the rebels use of violence against the Imperial military may feel that the rebels's main grievances are valid.

Leia, coming from the peaceful planet of Alderaan (and a secret Rebel Alliance member), would be a natural voice against encroaching Imperial militarism and totalitarianism. Vader scoffs that the princess was "not on any mercy mission this time," which further suggests that she has a history of undertaking visits to planets or sectors that have suffered under the Empire. Attacking her (a sitting senator, a known opponent of Vader's faction in the Imperial government, an opponent of militarism, and someone known to be sympathetic to grievances against the Empire) and taking her captive would naturally tend to provoke an outcry from her Senate colleagues and generate sympathy for the anti-military causes she championed.

*Vader would disagree (correctly) that his attack on Leia's blockade runner was actually unprovoked. In the novel, he claims: You passed directly through a restricted system, ignoring numerous warnings and completely disregarding orders to turn about—until it no longer mattered.

The Empire imprisoning one of their own senators who was on a diplomatic mission is an abuse of power and a very visible demonstration of their growing tyranny. Such an act is likely to be seen as overstepping the bounds of their authority, leading to greater sympathy for the Rebels who already preach the evils of the Empire. Leia being a known member of the Rebellion would actually be a major downside for the Rebels, as her imprisonment could be justified as a response to an act of treason.

Leia wasn't especially well liked by her fellow senators, but she was immensely popular with the general public. News that she'd been taken and/or abused by the Empire would likely result in senators being forced to make waves in order to placate their voters.

They thought they could take her prisoner? Her? Leia knew she hadn’t held much weight with the other senators, but she was well aware that the public cared about her. Any whisper of mistreatment would set the holonet on fire. Was that a risk the Emperor was willing to take?

Since Leia and her father were publicly sympathetic of Rebellion's cause, her capture (and the implication that they were detained for merely expressing general approval for the Rebellion) would therefore generate more sympathy for the Rebellion, not less.

Rumor—that sweet, swirling, shape-shifting creature—had it that the missing ambassador was senatorial royalty: Princess Leia Organa of Alderaan, to be specific. It was a logical conclusion, considering the Tantive IV was owned by her father. Both she and Bail Organa had publicly expressed sympathy for the rebels’ cause. That didn’t mean they were themselves rebels, of course. But what if they were? TK-4601 badly wanted to talk to TK-3338, who was following immediately behind him in their sweep, and ask if he thought it was true. What was she like, this senatorial princess? She couldn’t really be just nineteen, could she?

Star Wars: From a Certain Point of View - The Bucket

Vader was detaining Leia because he was looking for the Death Star plans but he couldn't publicly announce that's why he was detaining her. Therefore he had no public reason to detain an Imperial senator who was (allegedly) on a diplomatic mission. Other Imperial senators would not like the thought of the possibility that they could be detained by the Imperial military for no reason while on their own diplomatic missions; they could come to see the Empire as tyrannical and therefore sympathize with the Rebellion. Even if the Empire later proved that Leia was working with the Rebellion, the other senators would see that the Empire was willing to detain a senator without any evidence against her at the time.

I think the key part here is "on a diplomatic mission." There are special procedures for dealing with diplomats and you can't just casually arrest, much less imprison them.

Obviously the situation here is a bit muddied, since the Empire, the Imperial Senate and Alderaan are all technically part of the same polity. However the Empire does both deal with bodies outside itself (such as worlds in the Outer Rim), and it requires dealings directly between individual subject worlds. (There is a considerable degree of autonomy among the subject worlds of the Empire, and not all negotiations can rise to the level of the Senate; that wouldn't scale.) Hence there is a role for accredited diplomats in the Empire, even ones that operate internally to the Empire.

Since any senator (and their staff) outside their "home" territory in the Empire would not want to be arbitrarily subject to local law, it follows that they would expect some form of "diplomatic immunity." This is being violated by Leia's arrest, and the Senate would be expected to react badly to this loss of their privilege.

It is not entirely clear just how unified the Republic really was. Episode 1 opens with a military blockade and invasion of Naboo by the Trade Federation, while Amidala's appeal to the Senate runs into procedural shenanigans driven by partisan interests of other representatives (and of course stirred up by Senator Palpatine behind the scenes). At a rough estimate, the Republic was more unified than our United Nations, but less than the European Union.

So we have factions within the Republic, some of whom are able to back up their words with both military action and diplomatic pressure, and the Senate is just another venue for diplomacy and factionalism. If there are diplomats then there have to be rules about both their conduct and their treatment.

Once Palpatine turns the Republic into the Empire all this changes, of course. From then on instead of factions fighting within limits imposed by the Senate there is a full scale civil war between the Empire and the Rebellion. Leia's capture happens on the cusp of this change. When she is captured she attempts to cite the old rules to Vader, who replies that she is a traitor, presumably to the Empire. The Commander is presumably also thinking about the old rules when he talks about the political danger, but Vader knows better.

28
How did Luke suddenly know that Leia was a "Princess"?
10
Why didn't Palpatine/Vader crush Organa in between 2BBY and Alderaan's destruction?
31
Did Leia's excuse make any sense?
31
What is the "correct" pronunciation of Princess Leia's name?
9
Why did the senate freak out upon hearing that Leia was Vader's daughter?
18
Did any planet, system, or regional governor think the Empire was good for them?
10
Where did the idea for Princess Leia's metal bikini come from?
16
Why would Windu say the Senate would decide the fate of Palpatine?