Science fiction novel or short story. Characters were lost or crashed or something on a new-to-them world and were making for a mountain they could see in the distance. But when they reached the mountain, it turned out to be a hole blasted by an asteroid through the "world" they were on, which turned out to be some kind of flat fake habitat floating in space.

This is almost definitely Ringworld by Larry Niven. 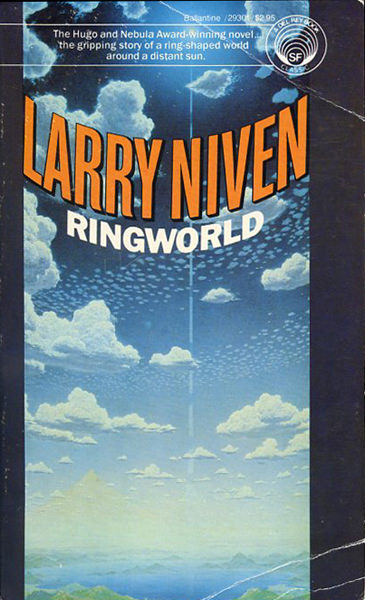 The mountain in question appears strange to Louis and company because it's so big, and it's located in the middle of the ring, while most of the mountains are part of the ringwall.

"That's the biggest tanj mountain I ever saw in my life."

He had spoken too softly. "A mountain!" he bellowed. "Wait'll you see it! The Ringworld engineers must have wanted to put one big mountain in the world, one mountain too big to use. Too big to grow coffee on, or trees, too big even for skiing. It's magnificent!"

It was magnificent. One mountain, roughly conical, all alone, forming no part of a chain. It had the look of a volcano, a mock-volcano, for beneath the Ringworld there was no magma to form volcanos. Its base was lost in mist. Its higher slopes showed clear through what must be thinning air, and its peak had a shiny look of snow: dirty snow, not bright enough to be clean snow. Perhaps permafrost.

There was a crystal clarity to the edges of the peak. Could it thrust clear out of the atmosphere? A real mountain that size would collapse of its own weight; but this mountain would be a mere shell of ring foundation material.

Louis realizes that what Fist-of-God (what the natives call the mountain) is, but refuses to say so aloud because he doesn't risk appearing foolish until the moment they reach the top.

"Remember the night you explored a giant map of the Ringworld? You couldn't find Fist-of-God. Why not?"

"Louis, just what do you expect to find in Fist-of-God crater?"

---And they were through. There wasn't any pass. There was only a broken eggshell of Ringworld foundation material, stretched by terrific stresses to a few feet of thickness; and beyond that, the crater in Fist-of-God Mountain.

They were falling. And the crater was full of stars.

There appears to be a bit of confusion as to the structure; in brief Ringworld is a megastructure approximately 300 million km (300 Gm) in diameter (950 million km in circumference) and about 1.6 million km (1.6 Gm) in width. It is relatively thin, on the order of 10s of km thick, and rotates about its central star to produce around 1g of pseudogravity. Millennia before the story, a moon-sized interstellar rogue planetoid struck the outward-facing side of the ring at speed.

14
Did the "Lying Bastard" create the Fist of God?
11
Novel where a man is paid to travel to a planet inside a metallic sphere