This is one of those things that popped into my head this morning and I just can't quite seem to get it out, so I'm hoping to identify it so that I can file it away as solved. This was a webcomic I read at least a decade ago, when Keenspot was still a major player in the webcomic game, although I think this one was a Keenspace comic. It was a fairly crudely drawn comic, little to no shading, and the characters drawn in minimal style, but it updated regularly and the storyline wasn't bad. The two main characters were a male and female elf and much of the storyline was about their relationship in a fantasy setting. I don't remember if it was a generally sex-positive world, or if it was just them, but there was a lot of sex, which was all the more odd because of the unsophisticated art style where everyone was a bit blobby, even when they had their clothes off and were showing off their bits. I want to say that the female was a bit "anything goes" in terms of partners (in particular, I remember a scene where a bird, drawn the same size of the elf, arrived with a message and then they had sex), and that left the male in the relationship feeling insecure during one of the arcs, wherein we got a flashback/fairy tale about how they met.

a magical talking penis, with many of the strips ending with it ejaculating.

I'm certain it's not Oglaf, which has a much more polished art-style, and the art style was less deliberately cartoony than the "True Slut Adventures" there (was well as more colorful). I'm pretty sure the title had "Elf" or "Elves" in it.

I suspect this is Elf Life, later renamed Alfheim. From Wikipedia:

Drawn in an economical, stylized cartoon style, Elf Life involves the love-hate relationship between the elves Baughb (pronounced Bob) and Filis (pronounced Phyllis). Some of the daily strips were occasionally replaced by prose chapters.

Baughb, short for Baughbberick Lindel, is well-meaning but infuriatingly eccentric. His mental confusion is compounded by the fact that he spent a long time traveling through time and trying to get home, and when he finally succeeded it was several generations after his original time.

Filis' ambition is to be a warrior. Over the course of the story various people kidnap and threaten Baughb, including an evil corporate executive version of himself from the future, and Filis finds herself reluctantly trying to save him. Eventually they become lovers, but — in the grand tradition of comedy — that does nothing to stop them from fighting.

The comic was indeed hosted on Keenspot, but seems to be no longer available.

Ah, and I found it. The Naked Elf was the webcomic I was thinking of, with The Happy Penis as the silly spin-off. The art-style was a little more sophisticated than I remembered, but the flat shading is about right. 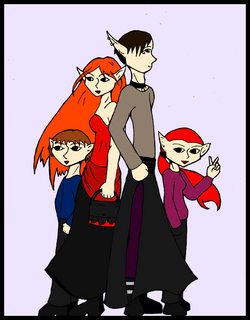 The strip largely follows the relationship of Twim and Sylphi, two elven students at Magical Institute of Technology, and their relationship. I haven't found the page I remembered with Sylphi having sex with a messenger bird, but I'm convinced enough. And yes, the comic is very NSFW although I'd argue it's not terribly explicit in a lot of ways due to its cartoony rendering and lack of close-ups.

13
Story identification: SF webcomic with two women travelling around the solar system, working?
4
Webcomic about a group of professional monster killers
10
Webcomic with roses and spirits
11
Webcomic following a boy who's inhabited by a vengeful ghost who's after the men who killed her
10
Fantasy webcomic about an annoying child and her guide
4
Webcomic (Keenspot?) about an amateur stage magician in a world where magic is real
9
Webcomic about a robot girl able to use magic who moves to the city to go to school
1
Webcomic involving an armless girl fighting sea monsters
10
Comic or Webcomic with a robot enthusiastically proclaiming “Krill the humans!”