Are comics shifting away from revealing costumes for women?

In the back pages of (the new) Captain Marvel #1 there is an interesting write-up about the decision-making process behind her new costume compared to her older one, including how it was a product "of its time" and that

the overt sexiness of the outfit would often - rightly or wrongly - cause the character to be dismissed outright.

Is there a consistent shift across comics for less of the legs-and-cleavage style of uniform for female characters these days? Have many other existing characters also featured a similar uniform change?

In a word, no. The comic and science fiction industries have always had issues around the appearance of its tightly-clad sexually-charged images of men and scantily clad images of women. This is endemic to the culture and often one of its worse features. It creates tension with the more conservative and sometimes puritanical culture of the nation at large.

Is there anything wrong with the images in and of themselves? No, it is more often the context of the images that creates the fervor than the quality or even the imagery.

Considering how often hyper-sexualized images are used to sell products world-wide, it is often hypocritical of modern media to single out comics, science fiction or fantasy images when their film equivalents are often exactly but there has always been the claim that comics are consumed by youth and as such should present better, more wholesome images.

This too, is hypocrisy at its finest.

So, should characters like the former Ms. Marvel (now Captain Marvel), Lady Death, Witchblade, or bad costume designs like the costume Susan Richards wore when she was Malice or the current revamp of Harley Quinn's costume be considered less than proper?

How about the inability of comic companies to put women in costumes more appropriate to their in-story needs? And yes, this particular rant is on DC but I could do the same for Marvel Comics or nearly any comic company that produces superheroes today.

And you Marvelites, don't gloat, because all you need to do is look at the old costumes for Mantis, Moondragon, Valkyrie, Clea and Mockingbird; embarrassing to say the least.

The solution to this problem lies with the writers, editors, producers and to a lesser extent, the readers. Comic companies are catering to their presumed needs of their readers. Granted, they create the costumes and therefore the desire, but they use sales as an indicator of whether they are doing a good job or not. Scantly clad female heroes in strange, completely unbelievable costumes (Witchblade) and anatomically impossible poses sell books and its as simple as that.

Recently, the comic companies have been catching a little heat from female readers and female writers wondering why in this supposedly modern age do we still insist on dressing female superheroes like ladies of the evening. This has prompted the tiniest response from most comic companies and a few costume redesigns have taken place. The question is why does the industry still suffer from the double standard of allowing men to wear more modest costumes than women and why is that deemed necessary and acceptable?

Is this a major trend? Not really. Wonder woman still has no pants and that crazy, spiky halter top. 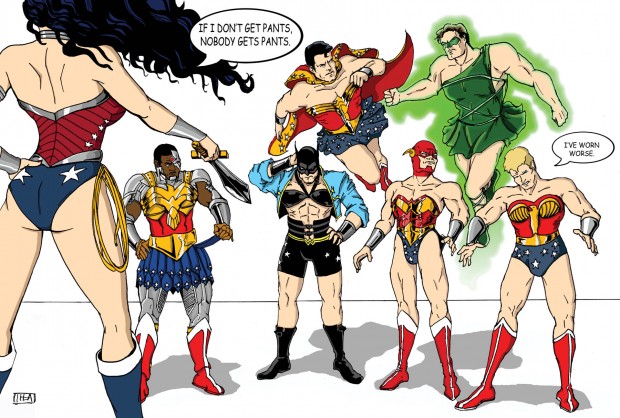 Power Girl still has a circle where her cleavage is (rumor has it she will be getting an upgraded, circle-free costume) and Black Canary is wearing something that looks like fishnets that double as body armor. Grrrr.

Ms. Marvel got an increase in rank to Captain and a complete costume for the first time in thirty years. It's a step. There is still a long way to go.

The outfit still doesn't leave much to the imagination...

The general trend for female superhero costumes (and many male ones too) has been to reduce skin while retaining the ultra-form-fitting look. It's a bit of false modesty; you know the skin's right underneath a thin layer of clothing, and it's so "painted on" that you don't miss a single curve.

In movies, there is a hint of practicality as well; put a character in a form-fitting suit and they can do the necessary acrobatics without worrying about a wardrobe malfunction. But, there's also an extra layer of aesthetics involved; you cover skin, which can be noticeably imperfect when filmed with the ultra-high-def lenses, with a material like leather or latex which can be buffed and polished until it's perfect. Again, you get all the same curves, but now the surface of the costume shines like glass, further accenting those curves (with the assistance of the DoP and gaffer providing just the right light from an implausible source).

In comics, the ink drawings don't have the minute surface detail of a photograph (it's possible but much too expensive for a comic book; maybe a graphic novel), and the artists never have to worry about slippage, but with the popularity of comics as movies, the movie production designers' choices are filtering back into the comics, not so much to make them easier to market to movie studios but because it's what we expect to see.

Not the answer you're looking for? Browse other questions tagged comics costume female-characters or ask your own question.

6
Why was Wonder Woman's costume updated but then immediately reverted to the old one?

9
Are SF comics considered for the same awards as books?
2
Are any of the characters in Danger Club from other comics?
8
What are comics numbered #0?
14
Are the bad guys from The Avengers (2012) movie, also from the comics?
7
How canon are the Dark Tower comics?
14
What are some good Iron Man comics for a beginner?
3
How canon are the comics?
11
What are those Image Comics?
18
Are Skrulls always evil in Marvel Comics?