The youngest person on Earth in a society of immortals

The protagonist is the youngest person on Earth -- the only one to be born in many centuries. Terrestrial society is small but every individual is unique and multitalented, as they are all immortal and have lived for centuries. They live in flying habitats.

No one knows how to raise children anymore; the protagonist wears diapers into adulthood because he was never potty-trained, and his education was haphazard. Consequently, he is quite lost in this advanced society, and only tolerated by the sophisticates around him.

When the Earth is invaded, the immortals put up only a show of a fight, arriving at the scene of battle in a colorful flotilla of unarmed flying habitats. To the horror of the protagonist, they are wiped out by the invaders. He realizes that the immortals were weary of life and welcomed this end.

This is probably a novel, though it might be a novella. It was written in English and I read it probably in the 1970s or 1980s.

The book you describe matches One on Me, by Tim Huntley.

There some basic information at Goodreads, and a more detailed review at Stranger Than SF. 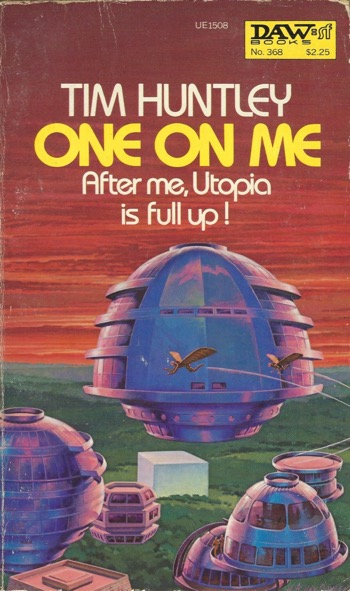 One on Me was published by DAW in 1980. Human society has advanced to the point where everyone is effectively immortal. Everybody lives in huge flying/floating houses. A popular form of recreation involves flying using personal flying suits with anti-gravity lifters and wings. The main character is the first child born in centuries. He desperately wants his own wings. Well, read the blurb from the back cover:

I was the last kid born on Earth - and an embarrassment to my mother. I grew up on a diet of Tri-D serials, wild parties, and screwball "uncles". All I wanted was to get my own wings and have the endless ball that everyone was entitled to in that air-borne Utopia.

But since Mom hadn't registered my birth with the computers, that was a problem. So she made a deal with me - agree to get a real education and I would earn my flying wings and all the rest.

However there was the usual catch. The end product of my eccentric schoolmaster, of the primitive girl who taught me even more, and of the relics of the past that were coming to life around me was a cosmic joke. On me, sure, but what the playboy world didn't know was that ultimately the joke was going to be on them. And it wouldn't be funny!

The main character is the first child born in centuries, and he's neglected and abused by his mother and aunts and uncles. He's an embarrassment they'd all rather be rid of.

Marcus Aurelius Hornblower, aka Mark, is the victim of the morally bankrupt Free Market. He is the first child born in hundreds of years. He's a mistake, and unwanted. His mother can't kill him--that would earn her a few minutes of public shaming on prime time TV--but she abuses him. From the time he's a baby she keeps him confined indoors, often locked into a large bathroom. He's denied friends. He's denied human touch. When he's very young his mother refuses to speak to him for years at a time, caring for him only through computers and robots. Later his mother and aunts and uncles sexually abuse him. He's forced to watch pornography. Terrorized at night. Tortured and mock executed for the amusement of adults.

Mark's mere existence is a burden and shame to his family, and he knows the only reason his mother didn't murder him is because it's a crime that would bring her embarrassment.

By the time Mark is 19, he's been so neglected that he's unable even to control his basic bodily functions. He still needs a diaper:

At nineteen years old he can't read or write. He can scarcely speak. Never been to school. Never left his home. Is completely dependent upon his abusers for his every need. He's unable to control basic bodily functions: he defecates and vomits everywhere.

The story really begins when Mark's mother and uncles abandon him:

When he's nineteen, his mother and uncles abandon him in a empty field in North America. ... Mark has the entire uninhabited continent of North America at his disposal, but no clue how to survive the outdoors. Fortunately, he quickly stumbles across a young woman. Her name is Synthetica, and her upbringing was similar to Mark's, with one exception: her father raised her outdoors and taught her survival skills. Like Mark though, she was deprived of human companionship and sexually abused. She was forced to be her father's lover. As a result, she's got issues: she's impulsive and promiscuous and, well, it's all obscene and vomit-inducing.

While exploring North America, Mark and Synthetica stumble across the Prison Cube, a facility where (a thousand years ago) everybody who objected to the new Free Market world was cryogenically frozen. Mark and Synthetica wake up Dr. Peter Winter, who immediately wakes up all his co-conspirators and they attempt to overthrow the Free Market. That's the invasion you were thinking of. Here's how it goes down:

Dr. Winter's prison break is the first new and exciting event to occur in eons. Everyone in the Free Market flies their houses to the prison to get a good look. Winter and his revolutionaries think this is an attack, so they unleash their weapons and destroy everything. When the shooting is over, the Free Market is utterly destroyed and everyone is dead.

As you mentioned, part of the reason the Free Market people allow themselves to be utterly destroyed is that their culture has become stagnant and everybody is bored with life.

Could be Gryphon by Crawford Kilian, published in 1989. The backstory is that Earth received the gift of extremely high technology from interstellar transmissions. This resulted in a 'singularity' type situation where everyone could own their own spaceship, become immortal, etc. The protagonist is one of very few children that were born in recent times. I believe the book starts out with him coming of age, or celebrating a birthday, something like that, and taking a cruise in a 'steam-powered' spaceship. At that point, the solar system is invaded. I think the unarmed flying habitats you're thinking of were on Venus, and they're wiped out because the owners are too bored to fight.

The title 'Gryphon' refers to the name of the invading species, as well as the protagonist's artificial lifeform bodyguard or companion, also of that same species. It's pictured in the cover art.

I just boxed up my copy along with all my other books, so I can't post the back-cover blurb...

Found the book. The back cover blurb is:

So, just for reaching his 25th birthday, Alex Macintosh received official adulthood and the title to his steam-driven spaceship.

His only problem was in using it to go anywhere, for the Solar System had unexpectedly been invaded by the Gryphons. And freedom for Alex - or any other human - was not part of their Plan. 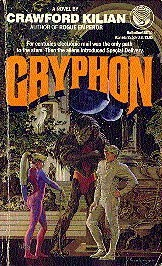