Was changing the movie poster for Return of the Jedi to have a green lightsaber ever considered?

It is well known that the original plan for Luke's lightsaber in Return of the Jedi was for it to blue, like the blades used by Luke and Ben in the first two movies. However, this changed in post-production to a green blade, which resolved a couple of different issues. It made it quite clear, from the weapon's first appearance in the sail barge battle, that it was a new item, replacing the lightsaber Luke lost on Bespin. It also provided a more visible color contrast in that same scene, in which Luke does a fair amount of fighting against a clear blue sky background.

However, the theatrical poster still had a design with a blue lightsaber blade (and blue-dominated color palette). The same design was used on a number of other tie-in products, such as for the cover of the film's soundtrack album. 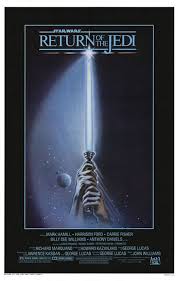 Once the decision had been made to change the color of the lightsaber in the film, was there any discussion of changing the poster?

Perhaps it might not have been possible to make the change, given the scheduling, if the green blade was added too late in post-production. Or it may have just conflicted with the normal schedule for the distribution of movie posters. On the other hand, I remember some theaters had the Revenge of the Jedi teaser poster (with an image obviously taken from the freezing chamber battle in The Empire Strikes Back) far, far in advance of Return of the Jedi's release; and practically ever theater had the final poster with the raised lightsaber well ahead of the actual release data. (One theater was selling off a few extra copies, but my father thought $8 was too much for a poster; I wonder how much it would be worth now?) So if they had really wanted to send out new posters by the time of the film's release, LucasFilm probably could have managed it.

Browse other questions tagged star-wars return-of-the-jedi poster-design or ask your own question.