There is a Earth colony planet and a rough and ready spaceship lands. A man emerges leading a herd of pigs and gets chatting to locals. He soon establishes himself in the community as a pig farmer.

In reality he's a galactic policeman, and the pigs are hyper intelligent and specially bred. They are the future equivalent of police attack dogs.

He soon gets on the trail of the bad guys, which is why he came, I think they're doing like a ghost scam (Scooby Doo!) to keep people from a certain area, but I don't remember why.

At some point the crooks are in an armoured car (maybe!), and the pigs rip it apart.

Note: See how I carefully avoided the police/pigs issue?

This is The Men from P.I.G. and R.O.B.O.T., by Harry Harrison. Specifically, you are remembering the first of the book's two novellas, which is, according to the dust jacket, "the inspiring story of Bron Wurbur, the man from P.I.G. (the Porcine Interstellar Guard), and how he and his herd of specially bred and trained pigs coped with a ghost problem on the planet Trowbri."

The men of the Patrol are the warriors and policemen of space. And none have more dangerous assignments than those from the P.I.G. and R.O.B.O.T. battalions!

The time has come when the Patrol is spread too thinly around the galaxy. New planets are constantly being colonized, bringing fresh problems of law-enforcement and defence against alien attack.

So new solutions are sought: like the setting-up of special units called P.I.G. and R.O.B.O.T. — units that are self supporting and equipped to handle even the most dangerous situations.

Hostile aliens are creating a ghost scare around their secret base—scaring most people away with fake supernatural events and killing those who actually come too close—which Wurbur and his pigs are sent to investigate and deal with. There is an alien ground vehicle, which he and the animals do indeed disable.

The two component stories were published earlier, then released with a frame story in a fix-up edition in 1978.

There are a number of covers, but this is probably the most commonly appearing one. 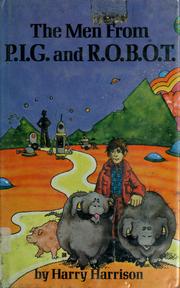 5
Need help finding a story about sunglasses that grant wishes
8
Identify this Dragonlance(?) story with clever use of footnotes
4
Need help with Ranger Rick sci-fi story
3
Sci-Fi short story about Galaxy alliance coming to free earth to help fight a war
8
Help me identify a sci-fi teleporter story
9
Looking for an old sci fi story (novella/short story) that originally appeared in Galaxy, Amazing or Astounding 1940-1960
10
Help identifying Sci-fi story with addiction to a spice as a plot point. Not Dune