I'm looking for the title of a short story of which I recall the following elements:

Story ends with a report about the father having committed suicide by climbing onto a high voltage overhead power line to get an ever greater speed boost.

I'm pretty sure this was included in some anthology.

Nothing Will Hurt You by David Morrell. I read it in the anthology Hauntings edited by Ellen Datlow 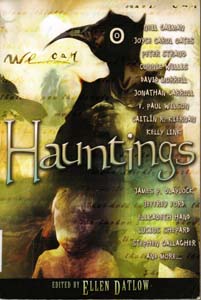 The father is Chad and the daughter Stephanie - I don't think we learn their surname. The murderer is a psychopath called Richard Putnam aka The Biter.

After the murder Chad breaks down. He becomes obsessed with catching The Biter and this drives away his wife and friends. His only comfort is that Stephanie appears to him as a golden light to reassure him that she is at peace. Eventually The Biter is caught, convicted and sentenced to life in prison. Chad is incensed at this and joins a pressure group campaigning for Putnam to be executed even though Stephanie pleads with him not to:

At three a.m., in Chad’s gloomy New Haven apartment, he raised his haggard face from where he’d been dozing at the kitchen table. He smiled toward Stephanie’s speck of light.

“Hi, dear. It’s wonderful to see you. Where have you been? How I’ve missed you.”

“You’ve got to stop doing this!”

“I’m getting even for you.”

“For me. Of course. I understand. But as soon as I know that he’s punished, I’ll put my life in order. I promise I’ll clean up my act.”

“That’s not what I mean! I don’t have time to explain! I’m soaring so fast! So brilliantly! Stop what you’re doing!”

Putnam is evenually executed by electric chair, but that night a terrified Stephanie visits him and tells him:

“But you said you’re soaring so brilliantly! How can he catch up to you?”

“Two thousand volts! He’s like a rocket! He’s grinning! He’s reaching out his arms! Help me, Daddy! You promised!”

Based on the note Chad left, his psychiatrist concluded that Chad’s final act made perfect, irrational sense. Chad bled profusely as he struggled over the barbed-wire fence. His hands were mangled. That didn’t matter. Nor did his fear of heights matter as he climbed the high tower while guards shouted for him to stop. All that mattered was that Stephanie was in danger. What choice did he have? Except to grasp the high-voltage lines.

To be struck by twenty thousand volts. Ten times the power that had launched the Biter toward Stephanie. Chad’s body burst into flames, but his agony meant nothing. The impetus of his soul meant everything.

Keep speeding, sweetheart! As fast as you can!

But I’ll speed faster! The monster won’t catch you! Nothing will hurt you!

Not while I can help it.