I read this book in the late 70’s/early 80’s. It is about people with psi abilities that end up travelling on a space craft. I can’t remember the author but he/she was very good. I borrowed it off my uncle and he couldn’t remember what it was called when I asked him about it in 2000 he passed away earlier this year and I am just trying to find what it was called and if I can get a copy from anyone. They guys will remember because the ladies were built well and they were called primes.

There are probably many books that would match, but one possibility that occurs to me is The Galaxy Primes by (the legendary!) E. E. Doc Smith. 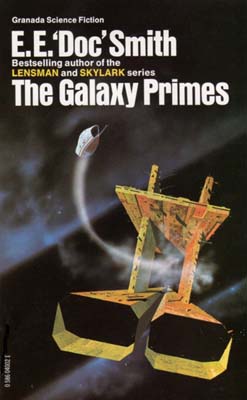 The protagonists are called Primes, they have telepathic powers and they are on a spaceship.

They were four of the greatest minds in the Universe: Two men and two women, all Psionic Primes, lost in an experimental spaceship billions of parsecs from home. And as they mentally charted the cosmos to find their way back to Earth, their own loves and hates were as startling as the worlds they encountered.

You mention the ladies are well built, and indeed the book starts:

Her hair was a brilliant green. So was her spectacularly filled halter. So were her tight short-shorts, her lipstick, and the lacquer on her finger and toenails.

Not the answer you're looking for? Browse other questions tagged story-identification books psionic-powers or ask your own question.