Has J.J.Jameson ever found out that Peter Parker is Spider-Man?

I haven't read the comics, only seen some Spider-Man movies and The Animated Series, so I wonder if J.J.Jameson has ever found out that Peter Parker is Spider-Man?

In the comics, Peter once willingly revealed his identity to JJJ.

TL; DR.
In Peter Parker The Spectacular Spider-Man Issue # 6, Spider-Man agrees for a dinner/interview with J. Jonah Jameson. Long story short, Peter reveals his identity to JJJ just to make him understand that not all masked people around are bad people (NOTE: JJJ's wife was killed by a masked criminal; it's covered in detail in this issue)

You could watch the summary of this issue here

The second instance is when he goes public!

In Marvel’s 2006 event storyline, "Civil War" by Mark Millar and drawn by Steve McNiven, Peter gave up his identity to the world. The superhero registration act forced the heroes to reveal their identity and Peter does the same; goes public with his identity. JJJ in fact faints after watching this.

Talking about the MCU version of Spider-Man, in Spider-Man: Far From Home,

his identity was also revealed in the post-credits scene. JJJ goes live with the breaking news telling the whole world about Spidey's secret identity which was [presumably] shared/sent to him by Mysterio before his death.

In issue 12 from 1964, a virus leaves Peter too weak to fight Doc Ock but he tries anyway, and gets beat. Ock then removes Peter's mask in front of everyone, including JJJ: 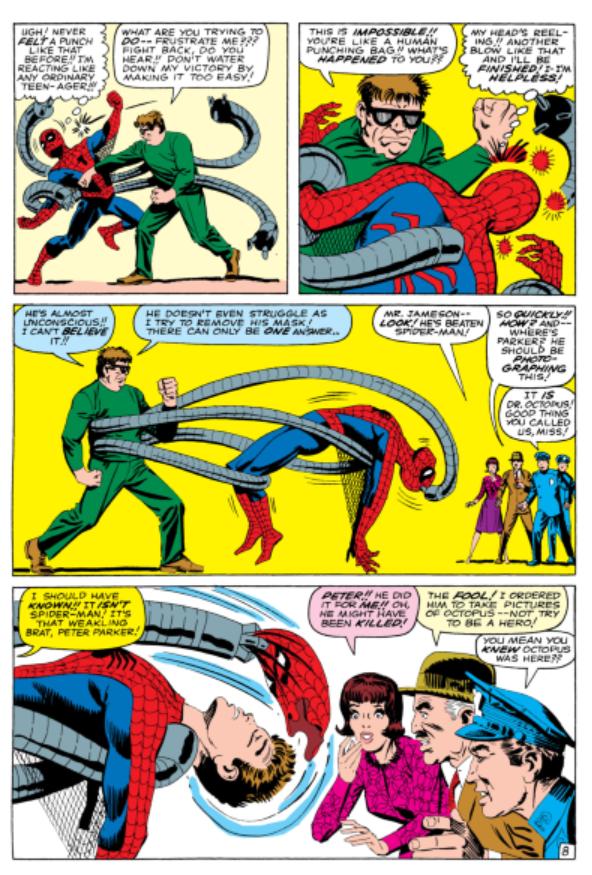 However, since Peter is too weak to fight or use his powers, nobody believes that he's actually Spider-Man, rather that Peter simply dressed up as him.

Ultimate Jameson also finds out about Ultimate Spiderman, right before he is seemingly killed by Ultimate Chameleon on Earth 1610. Chameleon captures both Jameson and Peter and while in captivity together Jameson figures it out, right before Chameleon shoots him in the head.