In the movie Harry Potter and the Order or the Phoenix, why didn't Mr. Filch succeed to open the Room of Requirement if it's what he needed?

As stated by Dobby in The Order of the Phoenix

‘Because [the Room of Requirement] is a room that a person can only enter,’ said Dobby seriously, ‘when they have real need of it’

As explained in Chapter Twenty-One of Half-Blood Prince, needing to catch someone using the room doesn’t work:

“Dobby, have you managed to get in to have a look at what Malfoy’s doing?” said Harry eagerly.

“No, Harry Potter, that is impossible,” said Dobby.

“No, it’s not,” said Harry at once. “Malfoy got into our headquarters there last year, so I’ll be able to get in and spy on him, no problem.”

“But I don’t think you will, Harry,” said Hermione slowly. “Malfoy already knew exactly how we were using the room, didn’t he, because that stupid Marietta had blabbed. He needed the room to become the headquarters of the D.A., so it did. But you don’t know what the room becomes when Malfoy goes in there, so you don’t know what to ask it to transform into.”

According to this, if Filch had been trying to get into the DA headquarters it would have worked, but simply trying to catch the students wouldn’t.

In fact, in the book version of Order of the Phoenix (Chapter Twenty-Seven) Umbridge’s people did gain access to the headquarters:

I have all their names here, Miss Parkinson ran into the Room of Requirement for me to see if they had left anything behind. . . . We needed evidence and the room provided . . .”

Suppose that Filch wants "the room that the students are in". Now, if the students want Filch not to see them, then there is a conflict between the two.

However, if the Students just want the entrance to be blocked by a cupboard of cleaning supplies, then Filch can access the room without issue - however, there are walls blocking his view of the students: 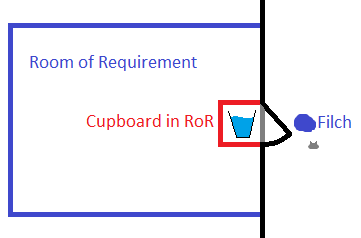 Like this, there is technically no conflict between the two requirements - both are fulfilled by one configuration.