Why is the Ministry empty when Harry gets there in Order of the Phoenix?

When Harry first tells Hermione and Ron about the vision he had about Sirius in the Department of Mysteries, Hermione points out that it would be impossible since it's 5pm and the Ministry is full of workers. When the group gets to the Ministry, no one is there.

"But...Harry, think about this," said Hermione, taking a step toward him, "it's five o'clock in the afternoon...The Ministry of Magic must be full of workers....How would Voldemort and Sirius have got in without being seen? Harry...they're probably the two most wanted wizards in the world....You think they could just get into a building full of Aurors undetected?"

I know that Voldemort or the Death Eaters somehow got everyone out, but how could they have possibly done that? There are hundreds are people working, including the Aurors and the Minister of Magic. And even if most people had gone home by that time, there still would have been security, etc.

Order of the Phoenix - page 769 - Bloomsbury - chapter 34, The Department of Mysteries

So if somehow Voldemort has the power to get everyone in the entire Ministry to evacuate, why didn't he just get the prophecy himself instead of using a likely to fail plan to get Harry to go? Bellatrix remarks about how Voldemort couldn't just walk through the Ministry, but why couldn't he? If it was completely empty? He shows up anyway at the end. And why is it more likely an underage wizard could get into the Department of Mysteries than a powerful grown wizard?

"Get it himself?" shrieked Bellatrix on a cackle of mad laughter. "The Dark Lord walk into the Ministry of Magic, when they are so sweetly ignoring his return? The Dark Lord, reveal himself to the Aurors, when at the moment they are wasting their time on my dear cousin?"

And if he used some enchantment to get everyone out, why did Fudge show up at the end? If there was some sort of alarm system that alerted Fudge, wouldn't it have gone off in the beginning? They were there for at least an hour before Fudge comes.

When Hermione tells Harry that it is 5 o'clock, it is quite a while before they actually get to the Ministry. They hatch a plan to break into Umbridge's office to use her fireplace, then they get caught and after a short time trek through the woods a fairly long distance to take her to Grawp and then have to come back. Only then do they start on the journey all the way to London from Hogwarts on Thestrals(which presumably take at least as long as the trip on the Hogwarts Express, and probably much more time).

I would put a rough low estimate on 5 to 6 hours before they get there, meaning it was very late and that the place would be empty aside from possibly a few guards.

Now if you also take into account that Fudge was paranoid at this point and wanted to weed out anyone who could be supporting Dumbledore, or who believed that Voldemort was back, it seems likely that the sparse guards that may have been there could have easily been either Death Eaters, or people sympathetic to their cause. Remember that Voldemort chose this night to lure Harry into the Department, so it seems likely that he planned the trap around a particular guard duty.

They're civil servants! No way they work past 5pm!

Many people have answered the question of why no one was at the Ministry when Harry & his friends arrive - it was actually hours past 5:00PM when they arrive, as there was a lot of planning involved, they went through the Forbidden Forest and half of London first, the guards were tricked or brainwashed by or working for Voldemort etc. - but no one has yet answered the second question the OP asked, the question of why Voldemort could not get his hands on the prophecy. Now, perhaps he/she should have separated these questions, as they are not very related, but, regardless, the fact remains that no one has answered it.

When Trelawney first said the prophecy to Dumbledore, there was only one other person present, a Death Eater, Snape. However, Snape did not hear the entire prophecy. He only heard half, because he was caught spying halfway through. Voldemort did not care about the rest of the prophecy, as he thought he had heard all he needed.

Harry's repeated victories against Voldemort eventually forced him to reconsider. However, when the Department of Mysteries labeled the prophecy and stored it in a crystal ball somewhere, using sophisticated magic Rowling will probably never reveal even if she knows, the Department labeled the prophecy as belonging to Harry alone, rather than Voldemort or Neville (the prophecy could have been about Neville, but Voldemort "chose" Harry, which was an important part of the prophecy). I don't believe it was said whether prophecies could belong to more than 1 person, but perhaps the Department specifically chose only Harry as its pertainee because it did not want to give Voldemort any more ammunition. Therefore, for reasons I do not believe Rowling has explained, only Harry could pick up & view the prophecy, and others around him could see/hear it only if he did so.

In order for Voldemort to hear the rest of the prophecy, he had to either get Dumbledore to tell him (Trelawney does not remember her "true" prophecies, as illustrated in the same book), or he had to get Harry to hear the prophecy and tell him. He did not choose the Dumbledore route, for obvious reasons. There were 2 ways Harry could hear the prophecy: from Dumbledore, likely long out of earshot of Voldemort and without the desire to tell him later, or from the "Prophecy Ball" in the Department of Mysteries, within earshot of Voldemort if he planned it right. Again, he chose the Department of Mysteries, for obvious reasons.

Unfortunately for Voldemort, Harry was stronger-willed than he likely intended, and broke the ball rather than let him hear the prophecy, even though Harry knew he may never hear it himself. Voldemort was making it seem like it held mysteries as to why his parents were killed, among others, which he thought Harry couldn't resist (he couldn't), even though Voldemort likely knew they were utter nonsense (they were the reason Voldemort killed Harry's parents, but had no more importance than that), but Harry did resist them. This is probably part of the "courage" or "strength of character" Gryffindors are chosen and known for. Harry didn't know at the time that Dumbledore had heard the prophecy, which Voldemort was also counting on, but he had, so luckily Harry heard it later, but Voldemort never did. It probably wouldn't have done him much good, anyway, and knowing his obsession with patterns and complexity, it may have actually done him harm.

In J.K. Rowling's early plot outline for this chapter, there is a note that reads "Distract Aurors. Draw them away from Ministry - have Harry clear". 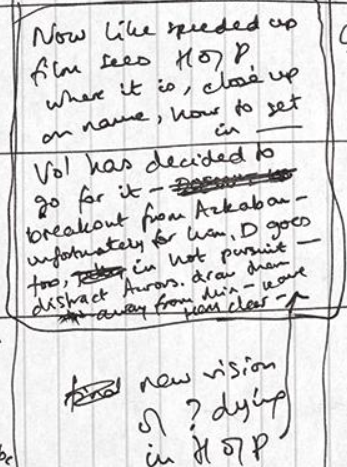 Now like speeded up film[, Harry] sees H[all] of P[rophecies], where it is, close up on name, hour to set in - Vol[demort] has decided to go for it - breakout from Azkaban - unfortunately for him, D[umbledore] goes too, in hot pursuit - distract Aurors. Draw them away from Ministry - have Harry clear - new vision of ? dying in H[all] of P[rophecies]

However note that in this original outline the Azkaban breakout coincided with the prophecy heist (and also Dumbledore was in Azkaban at the time of the breakout), so it's possible this idea was not kept.

Unfortunately, since the books are written primarily from Harry's point-of-view, there's no way for us to know these kinds of details.

My guess is that the Death Eaters created some kind of fake "emergency" - something like a toxic chemical spill that would have required the complete evacuation of the Ministry. Eventually, ministry officials would start coming back to investigate, but presumably, the Death Eaters expected to have everything wrapped up and be gone before that happened.

Odds are, those valid questions about security should have been a big warning sign. But I concur with NominSim about why, when they finally got there, the place was empty. As Admiral Akbar would like you to remember, it's a trap!

I always assumed that any guards that were there, were put under the Imperious curse by Lucious and his gang, and told to go hang out in some far away wing of the Ministry so as stay out of the way.

The reason the Ministry is deserted when Harry and co arrive is because everyone has left work - it now being a few hours later than 5pm due to the hours and hours spent in the flight they had undertaken from Hogwarts in the far north. The Death Eaters had probably enchanted or cursed the Security Guards and that was why they were not there - either that or they were Death Eaters themselves as we know Death Eaters were on the Ministry payroll (most notably Lucius Malfoy). Fudge etc turn up later because they had been at home as it was well after working hours. If you take it that Hogwarts is supposed to be in Scotland somewhere and that Harry and his friends are a group of underage wizards who can't apparate to London but must undertake a flight of a few hours length then of course they will arrive after 5pm and by quite a long way past 5pm. Hermione asks how Voldemort and Sirius could have entered the Ministry at around 5pm when people were sure to be working. We know later, of course, that they hadn't and that Voldemort had been using his link with Harry to make him think that he had Sirius there and was torturing him. In fact, the Ministry workers were still there working away as happily as any civil servant can late in the afternoon and there was no need for an evacuation or any enchantment because Voldemort and Sirius were not there! It was a trap to get Harry to come to London and arrive a few hours later at a time when the Ministry would be empty in order for him to retrieve the prophecy.

20
How fast do Thestrals fly?
11
Why was the British Ministry of Magic so careless with the Time-Turners?
12
Why was the Department of Mysteries unguarded (by the Order) when Harry and friends arrived?