All I remember is that close to the end of the episode (whatever cartoon it was) a ghostly western cart ridden by a dead lady comes and I think kills or at least scares a bad guy. I think I saw this cartoon on Cartoon Network in the '90s or early 2000s. I think there also was a treasure involved in the story... Something tells me it was Jonny Quest, but I couldn't find the episode... I thought it might have been another cartoon...

I was also searching for this episode for ages. It is called "The Ballad of Belle Bonnet" from The Real adventures of Johnny Quest. Damn, that episode was scary back in the day. 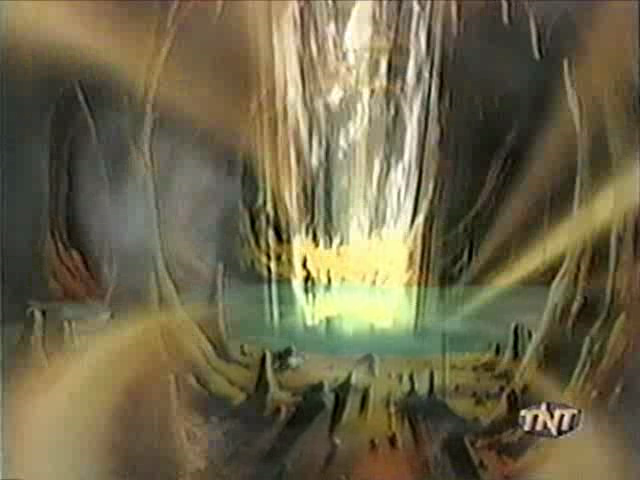 The next morning, Ames explains that Belle was going to rob to get the money, but had unexpected competition from other thieves. The Indians assumed she simply took the gold and headed east, but Jonny insists that hers is the ghost in the cavern. The team descend, and Jonny and Hadji find the crashed coach and treasure chest full of gold, bringing it to the surface via inflatables. They find that Race and Dr. Quest are missing; Rawlings emerges from the shadow with a shotgun ready. The ghostly visions then appear as the treasure chest spills out and mesmerizes Rawlings. The ghostly stage coach tramples him; Jonny and Hadji find him dead with no visible markings. Belle Bonnet appears a final time to remind them that the gold is for the children.

3
90s cartoon, caveman in search of monster eggs that he revives into talking creatures that can evolve when endangered
13
An animated movie about a dwarf or gnome that seems to be good but turns evil by killing the bad guy with a gun at the end
11
A cartoon/anime with a blonde-haired boy with blue eyes and his father(?), they're looking for 7 gems/diamonds
5
Animated series from 80s or 90s involving Space ships and an orange tree farm in a canyon
7
Trying to identify a short story (possibly arc) where barbarian and accomplice freed slaves
5
Novel about energy beams from space giving people powers
10
Space cartoon from the 80s or 90s
7
Mutated beetles cartoons (characters made of rope and rings)
6
Cartoon from 90s-2000s about alien who is stranded on Earth and has a son with a woman