I read a book quite a while ago about a typical fantasy world that somehow had a connection to a modern world, and modern people would go on tours where they would be a "hero", taking part in staged battles and ultimately defeating an evil lord.

I initially thought this was a Discworld book, but I haven't found any with a similar sounding synopsis. Still, there might be some type of connection. Or not.

You're looking for Dark Lord of Derkholm by Diana Wynne Jones. The world in which it is set is forced to act like her earlier book, The Tough Guide to Fantasyland, which might have contributed to you thinking of it as a satire like Discworld.* 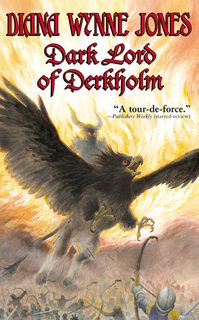 A fantasy world is dominated by its destructive tourist industry. "Mr. Chesney's Pilgrim Parties" arrange for annual group tours, evidently from our world, to experience all the cliches: wise Wizard Guides, attacks from Leathery-Winged Avians, the Glamorous Enchantress, the evil Dark Lord. It is a devastating show: farmlands are laid waste, people slain, and so on.

In a meeting about the Pilgrim Parties, High Chancellor Querida takes a wizard, a high priest and a thief to see the Oracles, who determine that the next person the group sees will play the role of the Dark Lord, and the second person will be the Wizard Guide that they need. They meet Wizard Derk, who has taken his son Blade to see the Oracles, who say that he will be coached by Deucalion.

Derk undertakes to "evil-fy" his home, Derkholm, for its role as the Dark Lord's capital. He summons a demon to bind there, but it escapes. An ancient dragon mistakes him for a ruling Dark Lord, takes offense when it learns the commercial truth, and burns Derk so badly that he cannot play Dark Lord or help with other arrangements. His children take over.

Back at Derkholm, father Derk is badly depressed by the apparent death of Kit, and does not carry out any of the Dark Lord's duties, nor eat, sleep, or wash. Pilgrims are camped in the valley, having been barred from the Dark Citadel by Derk, and many denizens of fantasyland (Dragons, Elves and Dwarves) have gathered in the Dark Citadel or its vicinity, by the time Mr. Chesney arrives to assess the situation and determines to levy fines. Deucalion, the dragon helps the demon in Mr. Chesney's pocket escape and return to its mate, the one that Wizard Derk summoned. The gods, which Mr. Chesney had demanded to appear, show up and shrinks him, and leaves with him.

And yes, there are arranged "accidents":

On top of that comes insurance, and the bribes paid to make people ‘expendable’, or set to be killed during the tour.

It was followed by Year of the Griffin, where Elda, Derk's daughter, goes to a magical university.

5
YA book about a caveman in modern day
5
name of fantasy books about people who travel back through time from post apocalyptic world to fantasy/magic world
9
Help identify a modern fantasy short story
34
Story Identification: Fantasy world that is “the one true world”
4
Looking for a book about people who were taken from different times and escape to the modern world
11
Fantasy Story About A Boy And Girl That Enter A Fantasy World Pre-1994