There was this cartoon show I used to watch around 2007-2010 which had an organization fighting monsters and evil.

The head of this organization was a woman who also had two children, a boy, and a girl. The boy and the girl studied in college (I think) and every time some monster appeared they used to call the siblings for the mission using some teleportation device. They used to fight the monsters using the wristwatch which has some special object for each mission.

Could you be thinking of Martin Mystery (2003)? 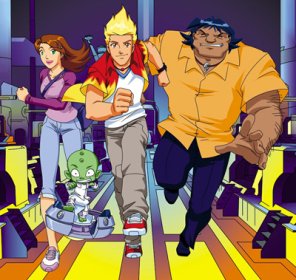 The series re-imagines the comic books' main characters (Martin Mystery and Diana Lombard) as 16-year-old step-siblings attending Torrington Academy, a high school in Sherbrooke, Quebec. They work for a covert organization known as "The Center," which covertly protects the people of Earth from supernatural threats. Their allies at The Center include Billy (a small, green-skinned alien), who is one of Martin's best friends, and Java (a caveman from 200,000 years ago), who works as a janitor at Torrington Academy. Martin's vast knowledge of the supernatural and his remarkable intuition make him a valued agent of The Center, and compensate for his huge ego and poor personal hygiene. Diana resents these flaws at times, as Martin often does not seem to understand the seriousness of his missions, but generally loves him like any sister.

The director of "The Center" is a woman known as "M.O.M."

One of the episodes, "Revenge of the Doppelganger", does involve a female losing her facial features:

Found with a search for "cartoon siblings in college fight monsters".

4
Cartoon about a boy and his friends capturing monsters
7
Cartoon series with teens and adults summoning monsters, involved five temples in Atlantis
6
Cartoon - boy traps monsters into balls on a magical bracelet
4
90s/2000s anime/cartoon with a boy, a girl, and a robot looking for seven gems to prevent the planet from blowing up
6
Cartoon TV Show About Three Kids and Monsters and a “veil” between realms
5
Cartoon in which a boy and girl travel with a robot
9
Old cartoon show about short horror stories