Novel about a violent televised Football game played in an area of the actual city. Very similar to Rollerball

Novel from 70s or 80s. Pretty sure it was a Hardback (checked out from library) in English.

The setting was very similar to the Rollerball (1975) movie. The broadcast of the show is the "Bread and Circuses" used to control the masses.

I get vibes that the title was something like KillBall or KillBowl. But have not located anything in Google searches.

The games were played in run down sections of the city. covering several city blocks. (maybe like 10x6 city blocks). It was not an open field. The players would dodge around building/houses and many times even through them. Busting through doors or flimsy walls or fences. (I recall one scene a player, the Aging Quarterback I think, taking a break in a public restroom to get warm. It was the middle of winter in the city.)

The players had a pouch on the front of their jersey where they would carry the ball, so they would have their hands free. Pretty sure it was legal to fight if you got cornered with the ball.

IF I recall correctly one of the players (The Safety?) was equipped with a rifle/shotgun with one round (per game? Per quarter?) that he was allowed to shoot the opposing teams ball carrier with to stop him.

They did not wear normal Football padding, it was more like Combat Armor/Helmet. So I think the Safeties typically would do Leg shots, as shots to the head or chest/back might knock the ball carrier down, but they would be able to get back up and keep running.

I think the Aging Quarterback, starts noticing that the opposing players on many of the last few games seems to be getting help in winning. (inside info? or advance info?) so that they can avoid ambushes to stop them from scoring goals.

The title is "Killerbowl" by Gary K. Wolf 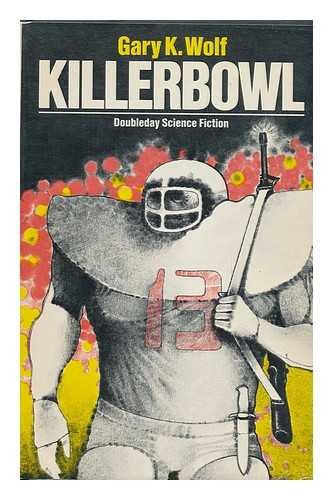 At the age of thirty-four, T.K. is the oldest player in the ultraviolent sport of Professional Street Football,

The games were played in run down sections of the city. covering several city blocks. (maybe like 10x6 city blocks).

game is being played on a six block by eight block section of the downtown city.

They did not wear normal Football padding, it was more like Combat Armor/Helmet. ...one of the players (The Safety?) was equipped with a rifle/shotgun.

Each player dons his lightweight body armor. Player by player they pass by the team armourer who gives each player his standard equipment, a long knife, a club, a bolo, a javelin, and to one player, a rifle.

the opposing players on many of the last few games seems to be getting help in winning.

Pierce Spencer and his IBC cronies aren’t taking chances. They know the game’s outcome even before it begins.

Not the answer you're looking for? Browse other questions tagged story-identification novel games or ask your own question.

3
Anyone Remember a Short Story or Novel about Cosmic Balance in the SF Bay Area?
7
Fantasy novel about an acolyte who leaves his sect, and learns about the city surronding it
8
Fantasy novel about a young witch girl in a parallel world very similar to the Europe of the early Modern Age
14
Short story about (American) football becoming more violent and fans taking part in fights on the field
7
Graphic novel about a fake city symbolized by a Drosera, cartographer crossing the desert in a triple-decker airplane
6
Middle grade novel about two kids in an underwater city, one coming from the surface; they get involved with a gang
3
Novel in which aliens invade Earth, human teenagers look very similar to the alien teenagers