I read this book a few years ago which was part of a series, but I only found the first book and now I've forgotten the name.

The first book featured 3 children/teens from different places that end up on a quest to search for magic gems/stones together and the story takes place in a medieval kind fantasy world. One is a girl, while the other 2 are boys. One of the boys actually finds a stone/gem while he is on a school field trip (I think the gem/stone is red in colour), and when he picks it up, he gets transported to the fantasy land but ends up in some sort of military training ground/camp somewhere in a desert type area. He isn't familiar with the fantasy world. The other 2 characters each start out on their own on a quest to collect some magical gems/stones which once collected, can be used to fight an evil ruler (I guess). But halfway through the book, the girl and boy meet up and continue the quest together while the third boy(transported one) doesn't know that the stone he picked up is actually one of the magical stones others are looking for.

A few other details I remember:

Some books with similar storylines, but not the one I'm looking for:

This sounds like it might be Circle of Three, first book of the Tales of the Nine Charms series by Erica Farber as per An old book series about stones, teenagers, and parallel worlds. 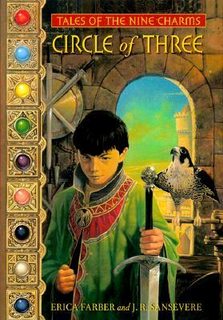 Walker, ever the class clown, reaches into a fountain and finds the joke's on him when he wakes up in a distant world.

Niko wants to be a warrior, but his master insists he learn the ways of a philosopher. What's the good of that?

Aurora can do simple gypsy magic tricks, but even she doesn't know the true depths of her power.

Drawn together by forces they don't understand, to combat an evil they can't imagine, their only weapons are nine simple charms.

This has two boys and a girl, one boy of which was transported to the fantasy world from ours. It's part of a trilogy (although apparently the third book was much delayed). The border of the cover depicts the gems. And some of the reviews, discussing how long it takes for the plot to pick up and for the heroes to band against the antagonist, fits them not meeting until halfway through the book. One additional potential matching point, a few reviews mentioned that the children largely dealt with conflict (sensibly) by running from superior opponents rather than fighting, which wasn't always narratively satisfying.

4
Early 2000s fantasy with colored stones of power
19
Book series where they collect either stones or gems
10
An old book series about stones, teenagers, and parallel worlds

10
An old book series about stones, teenagers, and parallel worlds
9
Fantasy series: auburn-haired boy whose mother/grandmother goes missing, flying airships
4
Fantasy story about a boy, a gem, a dwarf and a djinn
6
Fantasy trilogy. Boy named Ainsley(?) and a girl. Boy turns into dragon and then back again
10
Book where a boy and girl are transported into a fantasy video game
19
Book series where they collect either stones or gems
10
Anime about a red haired boy suddenly being transported into another world
12
Fantasy book about an (orphan?) girl named Opal, involves gems or stones
6
Fantasy Book: Time in the Fantasy Realm Passes Different from the Real World