How far did Gandalf and the Balrog drop from the bridge in Moria?

As best I can tell, in this dramatic scene from The Fellowship of the Ring, Gandalf falls for 71 seconds, mostly in free-fall while fighting a Balrog. True, the Balrog hits the walls of the abyss a couple of times, which slows their descent. But leaving that out of the account, according to the Free Fall Calculator, a fall of 71 seconds would correspond to a descent of about 24.7 kilometers and a terminal velocity of almost 700 meters per second, at which point the two fall into a deep pool of water.

It seems like the director exaggerated things a bit, as the Earth's continental crust is only 30 to 50 km thick, and heat and pressure both increase with depth to the point where open caverns and pools of water are impossible. So we can dismiss the film version as good cinema but bad science. Did Tolkien give any indication of how deep the abyss extended?

Tolkien is not at all specific:

'Long time I fell,' he [Gandalf] said at last, slowly, as if thinking back with difficulty. 'Long I fell, and he [the Balrog] fell with me. His fire was about me. I was burned. Then we plunged into the deep water and all was dark. Cold it was as the tide of death: almost it froze my heart.'

'Yet it has a bottom, beyond light and knowledge,' said Gandalf. 'Thither I came at last, to the uttermost foundations of stone. He was with me still. His fire was quenched, but now he was a thing of slime, stronger than a strangling snake.

'We fought far under the living earth, where time is not counted. Ever he clutched me, and ever I hewed him, till at last he fled into dark tunnels. They were not made by Durin's folk, Gimli son of Glóin. Far, far below the deepest delving of the Dwarves, the world is gnawed by nameless things. Even Sauron knows them not. They are older than he. Now I have walked there, but I will bring no report to darken the light of day. In that despair my enemy was my only hope, and I pursued him, clutching at his heel. Thus he brought me back at last to the secret ways of Khazad-dûm: too well he knew them all. Ever up now we went, until we came to the Endless Stair.'

So we know only that Gandalf fell for a "long time" to the "the uttermost foundations of stone", a place "beyond light and knowledge" which was "far, far below the deepest delving of the Dwarves".

However, the terminal velocity of a human body is about 55 meter/sec, not 700, so even if Jackson's cinematic chosen-for-dramatic-value guess is correct, we're "only" talking a couple of kilometers.

(And if you want to get hyper-picky, two other points: First, the fall was measured from a starting point inside the Misty Mountains. They may have started a kilometer above sea level, for all we know, and thus not be very deep into the crust. Second, if they did start near sea level, after they fell the first kilometer, the density of air would exceed that at sea level and terminal velocity would actually decrease somewhat.)

In the diagram, the horizontal distance of 20 miles from the guardroom to the bridge appears that to be about 2.5 times the vertical drop from the "First Deep" to the bottom of the abyss. Accounting for the 7:1 exaggeration of height in the diagram, that makes the drop about (20 / 2.5 / 7 =) 1.14 miles.

While The Atlas of Middle-earth provides several references to the text of The Lord of the Rings, I can't find any that back up the height of the vertical drop to the abyss that is shown in the diagram. It does, however, provide a reference to back up the 40 miles from West-door to East-gate (20 miles from the guardroom to both the West-door and East-gate).

‘I cannot say,’ answered Gandalf. ‘It depends on many chances. But going straight, without mishap or losing our way, we shall take three or four marches, I expect. It cannot be less than forty miles from West-door to East-gate in a direct line, and the road may wind much.’

Largely attempting to see how well the answers of Mark Olsen and Blackwood correlate, I consulted the keisan online calculator for free falls including wind resistance. Keeping other parameters at the default, entering a distance of 3650 meters gives a fall time of close to 71 seconds. That distance is the same as 2.27 miles (so almost exactly twice the estimate given in @Blackwood's answer). 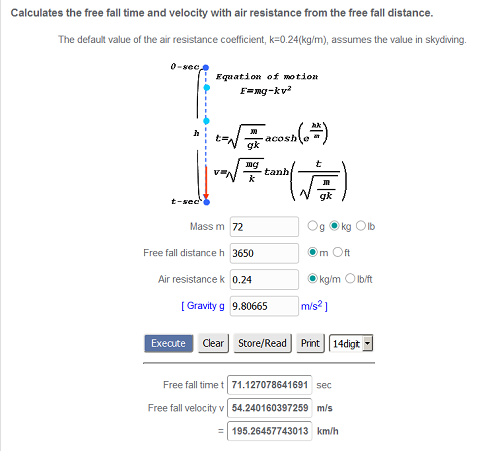 47
Do Balrogs Have Wings?
26
How deep down into the Earth did Erebor and Moria go?