What Is The Fastest We Have Seen Wally West Travel?

What is the fastest that we have Wally West travel in any continuity?

I'm not interested in characters talking about potentially how fast they could travel. I'm only interested in them actually traveling at their top speed and the issue number that they do it in.

I'd like to know the issue number and page (image if possible) with the speed that he is travelling.

NB: This has been edited to be broken out into different questions per Flash.

In JLA (1997): Issue # 89, Wally West saves half a million people from an exploding nuclear warhead. Below is the image: 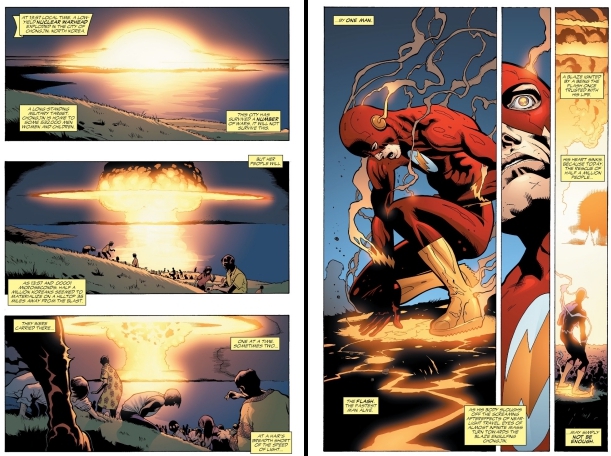 Although the issue doesn't specify his exact speed, it is evident that we can calculate it from the data in the image above. Also, there have been several calculations on the internet about his speed using these values; one of which is here.

However, almost all of them arrive to the same conclusion:

Wally ran about 13 trillion times the speed of light.

And that, is the fastest one I've seen/read about in the comics.

EDIT: Another feat by Wally was when he outran teleportation in The Flash (1987), Issue #138

Wally gets all 5 billion people on the planet to agree to run so that he can borrow their kinetic energy and beats the space overlords in record time. Also, he is helped by a fourth-dimension alien species that are pure kinetic energy.

So, you could consider this cheating, from a certain point of view. Nevertheless, Wally did run faster than teleportation.

Couldn't find (as of now) any comic book that specifies Jay Garrick's top speed. However I remember reading somwhere that his maximum speed is 99.99999% the speed of light.

Speaking about the Allens (Barry and Bart), once again I couldn't find any reliable source that mentions their top speed [like it does for Wally].

Sidenote: In the Flash CW series, episode Flashtime enter Flashtime, we see Barry go into flash time just before a nuclear bomb is about to explode. A quick calcuation here says he went at 99.99999999999999982775% the speed of light.

I don’t have the comic or anything but Wally West once in a comic went faster than instant when he had to beat these alien people with a ship that could go anywhere instantly. He beats the ship which shows he’s faster than instant.

Technically Wally west’s speed is infinite, like all other speedsters it depends on their ability to draw energy from the speed force. Wally West has done many amazing things, on numerous occasions been seen to outrun death itself, he has run faster than the universe can expand (he basically ran into the void, before anything else could could generate), possibly the most memorable of his feats, he ran across the multiverse faster than instant teleportation. When facing off with two aliens who liked to challenge the fastest people on each planet, Wally West asked everyone on earth to run at the same time, allowing him to harness all the kinetic energy that was generated, and he ran beat them back to earth despite their abilities to teleport instantly.

Not the answer you're looking for? Browse other questions tagged dc comics the-flash or ask your own question.

8
Differences between different incarnations of The Flash
4
Does The Flash's suit have its own powers?
2
How does The Flash move without being seen?
5
Who are these speedsters in The Legion of Doom (Season 2 Episode 10)?
0
Why did Wally have his powers even after Savitar died?
6
What makes The Flash the fastest man alive?
4
The Flash (Vol. 2) where Wally West casually fetches the Cosmic Treadmill from the past under his own power?